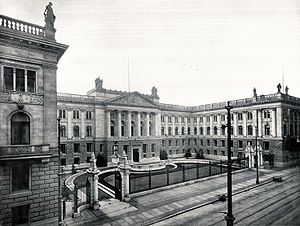 Seat of the Reichsrat (1919–1933) at the former Prussian House of Lords building on the Leipziger Straße in Berlin, Germany

The Reichsrat was one of two legislative bodies in Germany during Weimar Republic (1919–1933), the other being the Reichstag.

The Reichsrat consisted of members appointed by the German States and participated in legislation affecting all constitutional changes and state competences, while the Reichstag was the elected body of the people. Therefore, the Reichsrat functioned similarly to a parliamentary upper house, such as the House of Lords in the United Kingdom, although the Weimar constitution did not specifically spell out a bicameral parliament. The Reichsrat was the successor body to the Bundesrat of the German Empire (1867–1918), which was a more formalized upper house.

The Bundesrat had been the central body of the German federal state founded in 1867 as the North German Confederation and in 1871 became the German Empire. As this federal state comprised the various German kingdoms, principalities and free cities under the leadership of the King of Prussia, the Bundesrat comprised the delegates of the various states. Prussia sent almost half the representatives, being the largest state by far and so could block almost any decision. Also, the meetings of the Bundesrat were headed by the German chancellor appointed by the Emperor, who usually was identical to the Prussian prime minister. The Bundesrat was a very powerful institution, as its consent was needed for any legislation. Also before the chancellor's secretaries gained prominence in the 1890s, the Bundesrat together with the chancellor effectively formed the federal government.

The Weimar constitution at least de jure curbed the rights of the various states and the powers of their representation. The Reichsrat had no influence on the federal government. It could veto the Reichstag's bills unless the Reichstag overruled the veto by a two-thirds majority. In order to reduce the power of the Prussian state government in the chamber, the Weimar constitution explicitly mandated that half of the Prussian delegation be appointed by the state's various provincial parliaments, therefore in contrast to the Bundesrat the Reichsrat was not a chamber representing only the German states. However, de facto the Reichsrat remained very powerful as the Reichstag was splintered into many parties and frequently dissolved. In effect, bills vetoed by the Reichsrat rarely became law.

After Hitler came to power in 1933, the policy of Gleichschaltung first deprived the Reichsrat of its powers and later formally abolished it altogether, turning Germany into a centralized state.

After World War II, when the Federal Republic of Germany was founded the state's representation again was called Bundesrat and again became more powerful than the Reichsrat but not as powerful as the Bundesrat of the German Empire. The Prussian state was abolished altogether.

The number of votes in the Reichsrat, by state: