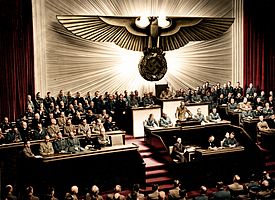 Adolf Hitler declaring war against the United States at the Reichstag, 11 December 1941

The Reichstag ("diet of the realm"[1]), officially the Großdeutscher Reichstag ("Greater German Reichstag") after 1938, was the pseudo-Parliament of the Third Reich from 1933 to 1945. Following the Nazi seizure of power and the passing of the Enabling Act of 1933, it met only as a rubber stamp for the actions of Adolf Hitler's dictatorship—always by unanimous consent—and to listen to Hitler's speeches. In this purely ceremonial role, the Reichstag convened only 20 times, the last on 26 April 1942. The President of the Reichstag (German: Reichstagspräsident) throughout this period was Hermann Göring.

During this period, the Reichstag was sometimes derisively referred to by the German public as the "teuerste Gesangsverein Deutschlands" (the most expensive singing club in Germany) due to frequent singing of the national anthem during sessions. To avoid holding scheduled elections during World War II, in 1943 Hitler extended the term of office of the current Reichstag (elected in late 1938 to serve in 1939-1943) to serve a special eight-year term ending on 30 January 1947.

In 1920–1923 and from 1930 on, the Weimar Republic's democratically elected Reichstag could be circumvented by two legal instruments not provided (as such) by the constitution:

The former practice became more and more common after 1930. Due to the Reichstag's complex system of proportional representation, it was extremely difficult for a government to have a stable majority. Frequently, when a Chancellor was voted out of office, his successor could not be assured of a majority. As a result, Chancellors were forced to use Article 48 simply to conduct the ordinary business of government.

Following the Reichstag fire on February 27, 1933 and the issuing of the Decree of the Reich President for the Protection of People and State the day after, Hitler used these legislative loopholes to force passage of the Enabling Act of 1933 on March 23. In ratifying the act, the Reichstag voted by a two-thirds majority to allow the government—in practice, the Chancellor—to enact laws on its own authority for a four-year period. With certain exceptions (which were in practice disregarded), those laws could deviate from articles in the constitution. From then on, though officially only the Reich Government as a whole could enact laws, the de facto power always lay with the Führer and Chancellor, Hitler. In effect, the Reichstag abandoned all responsibility for the exercise of legislative power.

Leaving nothing to chance, the Nazis used the provisions of the Reichstag Fire Decree to arrest all deputies from the Communist Party of Germany (KPD) and detain several deputies from the Social Democratic Party (SPD). Several other SPD deputies saw the writing on the wall and fled into exile. Ultimately, the Enabling Act passed by a margin of 444-94, with only the SPD voting against it. However, the Nazis had intimidated the other parties to the point that even if all 81 KPD deputies and 120 SPD deputies had been present, the Enabling Act would have still passed by more than the two-thirds majority required.

Before the summer was out, all other parties had either been banned or intimidated into closing down, and the Nazi Party was the only legally permitted party in Germany—though the country had effectively been a one-party state since the passage of the Enabling Act. In the parliamentary elections of 12 November 1933, voters were presented with a single list from the Nazi Party under far-from-secret conditions (see below). The list carried with 92.1 percent of the vote. As a measure of the great care Hitler took to give his dictatorship the appearance of legal sanction, the Enabling Act was subsequently renewed by the Reichstag in 1937 and 1941.

The Reichstag only met 12 times between 1933 and 1939, and enacted only four laws—the Law for the Reconstruction of the Reich of 1934 (which turned Germany into a highly centralized state) and the three Nuremberg Laws of 1935. All passed unanimously. It would only meet eight more times after the start of the war.

The actual Reichstag building (German: Reichstagsgebäude) was unusable after the Reichstag fire, so the Kroll Opera House was modified into a legislative chamber and served as the location of all parliamentary sessions during the Third Reich. It was chosen both for its convenient location facing the Reichstag building and for its seating capacity. The Kroll Opera House was devastated by Allied bombing on November 12, 1943 and was then essentially destroyed in the Battle of Berlin in 1945.

Elections and plebiscites in Nazi Germany

File:Bundesarchiv Bild 102-15183, Wahlplakat der NSDAP zur Reichstagswahl.jpg
Election poster for Hindenburg and Hitler in November 1933. It reads: "The Marshall and the Corporal fight with us for peace and equality" 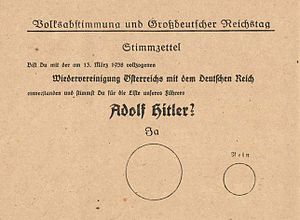 Referendum ballot in April 1938. It reads: "Do you agree with the reunification of Austria with the German Reich that was enacted on 13 March 1938, and do you vote for the party of our leader Adolf Hitler?" The large circle is labelled "Yes", the smaller "No".

The federal election in March 1933 was the last all-German election prior to World War II that was at least partly free. From then on, while elections were still held, voters were presented with a single list comprising Nazis and "guests" of the party. These "guests," however, fully supported Hitler. Elections during this time were not secret; voters were often threatened with severe reprisals if they failed to vote or dared to vote no. Under the circumstances, the Nazi list carried with well over 90 percent of the vote each time.

Special referendums were held, under similar conditions. The most famous of these was the plebiscite on the Anschluss with Austria in 1938. That vote officially recorded a 99.7% "yes".[2] Following the Anschluss, the Reichstag became the Großdeutsche Reichstag (roughly translated the Greater German Imperial Diet).

In accordance with the provisions of the Weimar Republic electoral law of 1933, one seat was granted for each block of 60,000 votes. Because voter turnout was very high, and also because of new territories added to the Reich, the Reichstag grew to significantly greater and greater proportions. Finally, there were 855 deputies; Adolf Hitler was No. 433, elected to the Reichstag constituency 24 Upper Bavaria - Swabia.

The Großdeutsche Reichstag convened for the last time in the Kroll Opera House on April 26, 1942. It unanimously passed a decree proclaiming Hitler "Supreme Judge of the German People," officially allowing him to override the judiciary and administration in all matters. Any last remnants of the privileges of the Reichstag's members were removed and the Führer became de jure the only and final decision-maker, with the power of life and death over every German citizen. In practice, this merely legitimized a situation that had been in place since 1933. For all intents and purposes, this extended the provisions of the Enabling Act indefinitely.

On January 25, 1943, five days before the expiration of the current Reichstag's term of office, the inauguration of a new body was postponed for another electoral term until January 30, 1947. This was to avoid holding elections while the war was still underway. With the Nazis' defeat in the war, the 1938 elections were the last for the German Reichstag ever, and would be the last all-German elections until the first elections for a reunified Germany in 1990.