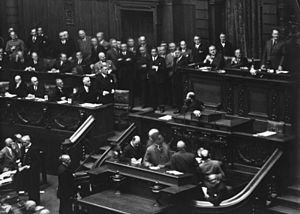 The Reichstag (English: Diet of the Realm[1]) was a legislative body of Weimar Germany (the "German Reich") from 1919, when it succeeded the Weimar National Assembly, until the Nazi takeover in 1933.

Although German constitutional commentators consider only the Reichstag and now the Bundestag to be the German parliament, in fact since 1871 Germany has been governed by a bicameral legislature, of which the Reichstag served as a lower house and the Reichsrat (after 1949 the Bundesrat) as the upper house. Constitutionally, the Reichsrat represented the governments of the federal German states.

According to the 1919 Weimar Constitution, the members of the Reichstag were to be elected by general universal suffrage according to the principle of proportional representation. Votes were cast for nationwide party lists. Elections were to be held at the end of a legislative session of four years. Because of some special requirements, there were still inconsistencies between the total share of votes received by a party and its share of the seats. Hitler was not in power yet.

There was no hard and fast threshold for winning a seat in the Reichstag. In practice, a party could do so with as little as 0.4 percent of the national vote—one seat for some 60,000 votes. While this provision was intended to reduce wasted votes, it also resulted in a large number of parties being represented in the chamber. Combined with the nationwide party-list system, this made it extremely difficult to form a stable government.

Moreover, each political party wanted to pull Germany in a different direction and parties often refused to compromise with, or even recognize, other parties. As scholar Erik von Kuehnelt-Leddihn wrote in 1943:

Catholic Centrists wanted to create conditions in Germany which would make it easier for the individuals to save their souls; Socialists denied the existence of souls and divided people into classes; the German Nationalists were interested in language and culture; while the National Socialists put the main stress on race. Whereas some looked at pocketbooks, others at the pigmentation of the skin or the index of the skull, fruitful discussions became impossible. When the speaker of one party indulged in his oratory, the others walked out. It was not worth while to listen to somebody's opinion when you knew that his premises were all wrong. The grim determination to silence the unconvincible enemy by execution or imprisonment already existed prior to 1933 in many parties.[2]

The parliament passed legislation and the government budget, as well as making declarations of war and ratifying international treaties. The members of the German cabinet, or government, were responsible to the Reichstag, which could force the resignation of ministers or even the whole cabinet by a motion of no confidence. It could also revoke "emergency decrees" by the Reich President according to Article 48 of the constitution -—however, on the other hand the President was able to dissolve the Reichstag. In contrast, the Reichsrat, the house of state representatives, had minor significance. The constitution also provided for the possibility of referenda, but the hurdles to overcome were high. There were only two plebiscites (in 1926 on the Expropriation of the Princes and in 1929 on the "Liberty Law" against the Young Plan), which were both unsuccessful. 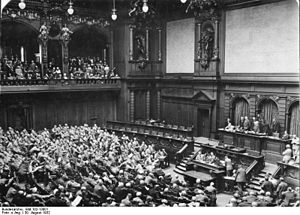 Opening ceremony on 30 August 1932, Nazi members of the Reichstag in uniform

All too often, when a Chancellor was removed from office, his replacement was well short of a majority. This was especially pronounced in the 1930s, when Chancellors had to resort to Article 48 just to conduct the ordinary business of government.

In the election of 1928, the Nazi Party won only 12 seats in the Reichstag, making it the smallest of the nine parties in the chamber. However, over the following two years it gained another 95. At the election of 1932, the Nazis and the Communist Party, both declared enemies of the parliamentary system, together held an absolute majority of the seats. In 1920–1923 and from 1930 onwards, the parliament was often circumvented by two instruments not strictly provided for by the constitution:

With this latter enabling act, the Reichstag formally gave up its exclusive responsibility for the exercise of the legislative power.

From then on, the German parliament only functioned as a one-party-assembly and as a body which ratified the actions of the Nazi dictatorship by acclamation. Even in its purely ceremonial role, the Third Reich's Reichstag convened only twenty times, the last being on April 26, 1942. On January 25, 1943, five days before the expiration of the last Reichstag's term of office, the summoning of a new body was postponed for another electoral term, until January 30, 1947, by a decree of the Führer.[3][4]

When in 1948-1949 the West German politicians established a new democracy, they used the word Bund (federation) in place of Reich; in German constitutional history both terms were almost exchangeable. With memories of how the Nazis had exploited the weaknesses of the Reichstag still fresh, the founders of the new state built in several safeguards to prevent a repeat occurrence. The new parliament became the Bundestag, elected by mixed-member proportional representation—a mix of members elected from individual constituencies and state party lists. From 1949, to qualify for seats by proportional representation, a party must either win at least five percent of the national vote or else win three directly-elected seats. The Chancellor (Bundeskanzler) must be elected by an absolute majority in the Bundestag, and could only be removed from office if a prospective successor was already assured of a majority. Besides the Bundestag, the Bundesrat (representing the governments of the states) has a decisive vote on legislation where the states' interests are concerned. 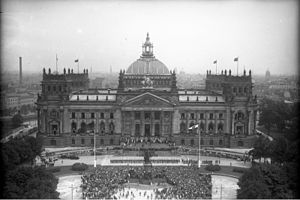 After the German unification of 1870, the new Reichstag first met in the houses of the Prussian Landtag in Berlin. In 1871 it decided to have a new building constructed, and in the mean time had its base in a former porcelain factory at number 4, Leipziger Straße. Some 23 years later the Reichstag's new building was finished, and it was opened by the Emperor in 1894. This is today known as the Reichstagsgebäude or as the Reichstag.

After the building was severely damaged in the Reichstag fire of February 1933, the Nazi Reichstag met in the nearby Kroll Opera House. Towards the end of the war the surviving, but heavily damaged Reichstag building was the object of numerous Soviet attacks, because it was seen as a symbol of the Third Reich. They hoisted the Red Flag just in time for the Mayday celebrations of 1945. After the war, it was repaired and used as an exhibition hall, but major renovation and rebuilding was needed for the new German Bundestag. Since 1999 the German Bundestag has used the former Reichstag as its permanent building. Its official address is Platz der Republik 1.