Reidsville is a city in Rockingham County, North Carolina. At the 2010 census, the city had a total population of 14,520.

Reidsville was established in the early 19th century as an outpost and stop on the stage line that ran between Salisbury, North Carolina, and Danville, Virginia, and was originally known as Wright's Crossroads. The community grew from a single home and inn owned by the family of Reuben Reid, a local farmer, businessman, justice of the peace and father of David S. Reid), into a thriving farming community primarily supporting tobacco production and cigarette manufacturing. Reidsville was officially incorporated by the North Carolina State Legislature in 1873 and became a key location of the American Tobacco Company which employed large numbers of city and county residents. The American Tobacco Company was the mainstay of Reidsville economics until its sale and closure in 1994. Many textile mills were established in Reidsville as well, with Cone Mills and Burlington Industries consolidating most of them in the mid-20th century, although most have now closed. Although Reidsville has experienced economic recession in recent years the community has enjoyed a renewal of growth as a sleeper city supplying a source of rural development for the surrounding larger cities.

The early roots of Reidsville, incorporated in 1873 by the State Legislature, date back to the early 19th century when William Wright of the Little Troublesome Creek area owned a tavern and store on the road connecting Danville and Salem. This outpost, called Wright’s Crossroads, was the earliest settlement in the present-day city and was overseen by Wright’s son, Nathan, and then Nathan Wright’s son-in-law, Robert Payne Richardson. Richardson’s home, built in 1842 on a knoll overlooking Little Troublesome Creek, still remains on Richardson Drive and has the distinction of being the oldest standing house in the city.

Reuben Reid of the Hogan’s Creek area moved his family, including wife, Elizabeth Williams Settle, and son, David Settle Reid, to a 700-acre (2.8 km2) farm on the ridge between Wolf Island and Little Troublesome creeks in May 1814. Reuben Reid became a successful farmer, operated a store and a public inn maintained in a private home and served the county as a constable and justice of the peace. When the family secured a post office, aptly named Reidsville, in 1829, 16-year-old David Reid was appointed its first postmaster. He later became a State Senator (1835–42), a U.S. Congressman (1843–47), Governor of North Carolina (1850) and a U.S. Senator (1854).

On November 26, 1858, William Lindsey of Pittsylvania County, Virginia, was high bidder for a 384-acre (1.55 km2) tract of land known as Reidsville. He and his bride, Sarah Holderby, a daughter of Joseph Holderby of the northern part of the county, moved into the frame house Reuben Reid had built across from his store. It is now a landmark in Reidsville, the first frame house built in the village.

Reidsville is located in east central Rockingham County. The Southern Railroad passes through the center of the city from north to south. The town was incorporated in 1873 by the Legislature. Tobacco was a mainstay of the local economy for many years, with the history of the city tightly woven with that of American Tobacco Company. With the sale of American Tobacco in 1994, city leaders have diversified the local economy and established Reidsville as a city that lives up to its motto, "Focused on a better tomorrow". The Reidsville Chamber of Commerce, established in 1923 by business leaders in the community, is now located downtown.

There were 6,013 households of which 27.5% had children under the age of 18 living with them, 42.7% were married couples living together, 18.3% had a female householder with no husband present, and 35.1% were non-families. 31.3% of all households were made up of individuals and 14.4% had someone living alone who was 65 years of age or older. The average household size was 2.34 and the average family size was 2.92. 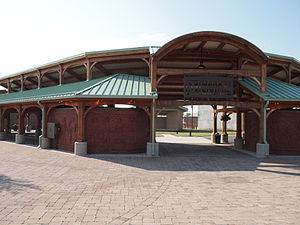 The downtown area of Reidsville was like many of its counterparts across the state in the 1970s, seeing a decline in business opportunities due to the emergence of malls and shopping centers. The Reidsville Downtown Corporation, a non-profit organization financed by monies from the Downtown District Tax, was created in 1976 to lead the charge to revitalize the downtown.

Joint projects of the Downtown Corporation and the City of Reidsville have been participation in the Main Street Program, the Streetscape Program and Façade Incentive Grant program. Each of these programs was initiated to aid in the revitalization of the downtown and improve the area aesthetically.