Relapsing polychondritis, also known as atrophic polychondritis,[2] systemic chondromalacia[2]) chronic atrophic polychondritis, Meyenburg-Altherr-Uehlinger syndrome, and generalized chondromalacia, is a multi-systemic condition characterized by inflammation and deterioration of cartilage. The often painful disease can cause joint deformity and be life-threatening if the respiratory tract, heart valves or blood vessels are affected. The exact mechanism is poorly understood, but it is thought to be related to an immune-mediated attack on particular proteins that are abundant in cartilage.

The diagnosis is reached on the basis of the symptoms and supported by investigations such as blood tests and sometimes other investigations. Treatment may involve symptomatic treatment with painkillers or anti-inflammatory medications, and more severe cases may require suppression of the immune system.

Though any cartilage in the body may be affected in persons with relapsing polychondritis, in many cases the disease affects several areas while sparing others. The disease may be variable in its signs and symptoms, resulting in a difficult diagnosis which may leads to delayed recognition for several months, years or decades.[3] Joint symptoms are often one of the first signs of the disease with cartilage inflammation initially absent in nearly half the cases.[3] 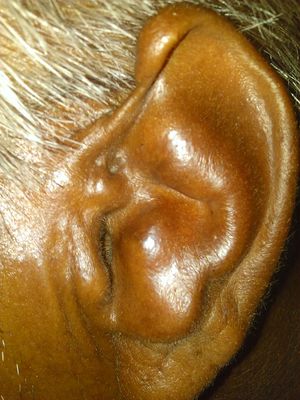 Inflammation of the cartilage of the ear is a specific symptom of the disease and affects most people.[3] It is present in about 20% of persons with RP at presentation and in 90% at some point.[3] Both ears are often affected but the inflammation may alternate between either ear during a relapse.[3] It is characteristic for the entire outer part of the ear except the earlobe to be swollen, red, or less often purplish, warm and painful to light touch.[3]

The inflammation of the ear usually lasts a few days or more, rarely a few weeks, and then resolves spontaneously and recurs at various intervals.[3] Because of the loss of cartilage, after several flares cauliflower ear deformity may result.[3] The outer part of the ear may be either floppy or hardened by calcifications of the scar tissue that replaces the cartilage.[3] These cauliflower ear deformities occurs in about 10% of persons with RP.[3]

The inflammation of the cartilage of the nose involves the bridge of the nose and is often less marked as the ears.[3] Statistics show that this clinical manifestation is present in 15% of persons with RP and occurs at some point in 65% of persons with RP.[3] Nasal obstruction is not a common feature.[3] Atrophy may eventually develop secondarily during the disease, this appears gradual and is not easily noticed.[3] This can result in collapse of the nasal septum with saddle-nose deformity, which is painless but irreversible.[3]

Inflammation occurs in the laryngeal, tracheal and bronchial cartilages.[4] Both of these sites are involved in 10% of persons with RP at presentation and 50% over the course of this autoimmune disease, and is more common among females.[3] The involvement of the laryngotracheobronchial cartilages may be severe and life-threatening; it causes one-third of all deaths among persons with RP.[3][5] Laryngeal chondritis is manifested as pain above the thyroid gland and, more importantly, as dysphonia with a hoarse voice or transient aphonia.[3] Because this disease is relapsing, recurrent laryngeal inflammation may result in laryngomalacia or permanent laryngeal stenosis with inspiratory dyspnea that may require emergency tracheotomy as a temporary or permanent measure.[3]

Tracheobronchial involvement may or may not be accompanied with laryngeal chondritis and is potentially the most severe manifestation of RP.

The symptoms consist of dyspnea, wheezing, a nonproductive cough, and recurrent, sometimes severe, lower respiratory tract infections.[3][5] Obstructive respiratory failure may develop as the result of either permanent tracheal or bronchial narrowing or chondromalacia with expiratory collapse of the tracheobronchial tree.[3] Endoscopy, intubation, or tracheotomy has been shown to hasten death.[3]

Relapsing polychondritis may affect many different organ systems of the body. At first, some people with the disease may have only nonspecific symptoms such as fever, weight loss, and malaise.[6]

The second most common clinical finding of this disease is joint pain with or without arthritis, after chondritis.[3][4] All synovial joints may be affected.[4][5]

At presentation, around 33% of people have joint symptoms that involve Polyarthralgia and/or polyarthritis or oligoarthritis that affects various parts of the body and often appears to be episodic, asymmetric, migratory and non-deforming.[5] The most common sites of involvement are the metacarpophalangeal joints, proximal interphalangeal joints and knees. After which is followed by the ankles, wrists, metatarsophalangeal joints and the elbows.[3] Any involvement of the axial skeleton is considered to be very rare.[3] Tests for rheumatoid factor are negative in affected persons with RP, unless there is a co-morbidity with RA.[4]

Less often it has been reported that persons may experience arthralgia, monoarthritis, or chronic polyarthritis that mimics rheumatoid arthritis, leading to a difficult diagnosis for this disease.[3] The appearance of erosions and destruction, however, is exceedingly rare and this may point instead to rheumatoid arthritis as a cause.[3]

Diseases and inflammation of tendons have been reported in small numbers of people with RP.[3] During the course of the disease, around 80% of people develop joint symptoms.[3]

The most common forms of ocular involvement are usually mild and often consist of unilateral or bilateral episcleritis and/or scleritis, that is often anterior and could be lingering or relapsing.[3][5] Scleritis that is necrotizing is found to be exceedingly rare.[3] Less often, conjunctivitis occurs.[3][5] There are also other ocular manifestations that occur in persons with RP, these include keratoconjunctivitis sicca, peripheral keratitis (rarely with ulcerations), anterior uveitis, retinal vasculitis, proptosis, lid edema, keratoconus, retinopathy, iridocyclitis and ischemic optic neuritis that can lead to blindness.[3][4][5][9] Cataract also is reported in relation to either the disease or to glucocorticoid exposure.[3]

The involvement of the peripheral or central nervous system is relatively rare and only occurs in 3% of persons affected with RP, and is sometimes seen in a relation with concomitant vasculitis.[3] The most common neurological manifestation are palsies of the cranial nerves V and VII. Also hemiplegia, ataxia, myelitis and polyneuropathy have been reported in scientific literature. Very rare neurological manifestations include aseptic meningitis, meningoencephalitis, stroke, focal or generalized seizures and intracranial aneurysm.[3][5] Magnetic Resonance Imaging of the brain shows multifocal areas of enhancement consistent with cerebral vasculitis in some cases.[4]

The involvement of the kidney can be caused by primary renal parenchymal lesions, or an underlying vasculitis, or another associated autoimmune disease. Actual kidney involvement is quite rare, elevated creatinine levels are reported in approximately 10% of people with RP, and abnormalities in urinalysis in 26%. Involvement of the kidney often indicates a worse prognosis, with a 10-year survival rate of 30%.[3][4][5] The most common histopathologic finding is mild mesangial proliferation, that is followed by focal and segmental necrotizing glomerulonephritis with crescents. Other abnormalities that are found include glomerulosclerosis, IgA nephropathy and interstitial nephritis. Immunofluorescence studies most often reveal faint deposists of C3, IgG or IgM in the primarily mesangium.[4]

These symptoms could consist of asthenia, fever, anorexia, and weight loss. It mostly occurs during a severe disease flare.[3][4]

Relapsing polychondritis is an autoimmune disease[10] in which the body's immune system begins to attack and destroy the cartilage tissues in the body. It has been postulated that both cell-mediated immunity and humoral immunity are responsible.[6]

Reasons for disease onset are not known, but there is no evidence of a genetic predisposition to developing relapsing polychondritis.[6] However, there are cases where multiple members of the same family have been diagnosed with this illness. Studies indicate that some genetic contribution to susceptibility is likely.[medical citation needed]

There is no specific test for relapsing polychondritis. Some people may exhibit abnormal lab results while others may have completely normal labs even during active flares.

Biopsy of the cartilage tissue (for example, ear) may show tissue inflammation and destruction, and may help with the diagnosis. The Biopsy of cartilage in patients with relapsing polychondritis may demonstrate chondrolysis, chondritis, and perichondritis.[citation needed]

There are several other overlapping diseases associated with RP, that should also be taken into account. About one third of people with RP might be associated with other autoimmune diseases, vasculitides and hematologic disorders.[5] Systemic vasculitis is the most common association with RP, followed by rheumatoid arthritis and systemic lupus erythematosus.[14] The following table displays the main diseases in association with RP.

A differential diagnosis should be taken into account with the following main RP manifestations.[5]

There are no prospective randomized controlled trials studying therapies for relapsing polychondritis. Evidence for efficacy of treatments is based on case reports and series of small groups of patients.[citation needed]

For mild cases limited to joint pain or arthritis, oral nonsteroidal antiinflammatory drugs (NSAIDs) may be used. Other treatments typically involve medications to suppress the immune system. Corticosteroids are frequently used for more serious disease. Steroid-sparing medications such as azathioprine or methotrexate may be used to minimize steroid doses and limit the side effects of steroids. For severe disease cyclophosphamide is often given in addition to high dose intravenous steroids.[6]

Many individuals have mild symptoms, which recur infrequently, while others may have persistent problems that become debilitating or life-threatening.[15]

Relapsing polychondritis occurs as often in men as in women. In a Mayo Clinic series, the annual incidence was about 3.5 cases per million. The highest incidence is between the ages of 40 and 50 years, but it may occur at any age.[6]

His patient was a 32-year-old male brewer who presented with fever, asymmetric polyarthritis, and the ears and nose showed signs of swelling, deformity and were painful. Biopsy of nasal cartilage revealed loss of the cartilage matrix and a hyperplastic mucous membrane. Jaksch von Wartenhorst considered this was an undescribed degenerative disorder of cartilage and named it Polychondropathia. He even took his patient's occupation into consideration, and related the cause to excessive alcohol intake.[17]

Since then, the disease has received many names. The following table shows the history of the nomenclature of Relapsing polychondritis. The current name, Relapsing Polychondritis (RP), was introduced by Pearson and his colleagues in 1960 to emphasize the episodic course of the disease.[17][18]

There has been little research on neurological problems related to RP.[3] If these cartilage structures get inflamed, they could press against nerves and cause a variety of problems that is seen in RP like peripheral neuropathy and many more.[3][5]