Religion in Greece is dominated by the Greek Orthodox Church, which is within the larger communion of the Eastern Orthodox Church. It represents the majority of the population[1] and is constitutionally recognized as the "prevailing religion" of Greece. Religions with smaller numbers of followers include Islam, Catholicism, Evangelicalism, Hellenic Paganism and Hinduism. A growing proportion of the Greek population is irreligious and consciously atheist. 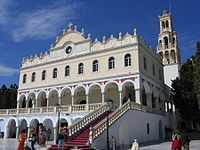 Our Lady of Tinos

The Greek Orthodox Church retains close ties with the Greek state, emphasized by the presence of Greek flags in all Orthodox churches, but also by the religious depiction of the flag and the coat of arms of Greece itself.

The Greek Orthodox Church, a member of the Eastern Orthodox Communion, is accorded the status of "prevailing religion" in Greece's constitution, and Greece is the only country in the world where an Eastern Orthodox Church is clearly recognized as a state religion. Since 1850, Greek Orthodoxy within Greece is handled by the Church of Greece. Its members comprise between 88%[2] and 95-98%[3][1] of the population, the most recent Pew report gave a percentage of 88.1% as 2010 numbers.[2]

The status of the Orthodox church as the "prevailing religion" is largely based on the role the church played for the preservation of the Greek nation through the years of the Ottoman Empire but also for the role the church played in the Greek War of Independence. As a result, many[who?] attribute to the modern Greek nation an ethnoreligious identity.

The Church of Greece is largely exempt from taxes, compared to other religious organizations. Furthermore, the mainstream Orthodox clergy's salaries and pensions are paid for by the State at rates comparable to those of teachers. All Greek students in primary and secondary schools in Greece attend Christian Orthodox instruction, although there is an exemption system for students who do not want to attend, as long as the exemption is requested by both parents. In addition, the Constitution prohibits proselytism from other religions, but places no such restrictions on the Orthodox Church.[citation needed] 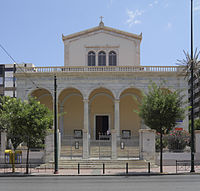 Cathedral Basilica of St. Dionysius the Areopagite in Athens.

Indigenous Catholic Greeks number approximately 50,000[3] and are found all over Greece; the majority, however, live in the Cyclades and the Ionian Islands. The presence of Catholics in the Greek islands is mostly a heritage from the time of the Venetian domination from the Middle Ages. The Roman Catholic community has increased in size in recent years due to immigration and today number over 200,000.[3] 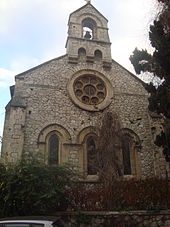 Protestants, including Greek Evangelical Church and Free Evangelical Churches, stand at about 30,000.[4][5] The Free Apostolic Church of the Pentecost was founded by Dr. Leonidas Feggos in 1965. The official church, Eastern Orthodox, and the State reluctantly gave permission for Pentecostal churches to operate legally. The process of receiving permission from the Ministry of Education and Religion to operate as a church is becoming easier. Assemblies of God, the International Church of the Foursquare Gospel and other Pentecostal churches of the Greek Synod of Apostolic Church have 12,000 members.[6] The Independent Free Apostolic Church of Pentecost is the biggest Protestant denomination in Greece with 120 churches.[7] There are no official statistics about Free Apostolic Church of Pentecost, but the Orthodox Church estimates the followers at 20,000.[8]

The presence of Armenians in Greece dates back centuries (from the Byzantine period), when Armenians settled in Thessalia, Macedonia, Thrace and the islands of Crete and Corfu for various reasons such as war or business.

The Armenians in Greece acquired the character of a community after the 1920s, when 70,000 to 80,000 survivors of the Armenian Genocide fled to Greece. Today, immigration to North America has diminished the Armenian population of Greece. The number now counts for roughly 20,000-35,000 Greco-Armenians.

Some thousands people are members of the Supreme Council of Ethnic Hellenes, the foremost organisation of Hellenic ethnic religion.[9][10] Over 100,000 people are "sympathisers".[11]

Main article: History of the Jews in Greece

The Jewish community in Greece currently amounts to roughly 7,500 people, concentrated mainly in Athens, Thessaloniki, Larissa, Volos, Chalkis, Ioannina, Trikala and Corfu, while very few remain in Kavala and Rhodes.[12] It is composed largely of two groups, the Romaniotes, Jewish communities dating back to Antiquity, and the Ladino-speaking Sephardim, who arrived from Spain and settled chiefly in Thessaloniki during Ottoman times. 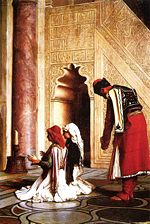 "Young Greeks at the Mosque" (Jean-Léon Gérôme, oil on canvas, 1865); this oil painting portrays Greek Muslims at prayer in a mosque.

Indigenous Turks and Muslims in Greece are mostly of Turkish origin though a community of Greek Muslims exists as well. The number of followers of Islam is estimated to be at 97,604 people or 0.95% of the total population, according to the 1991 census.[13] Immigrant Muslims are estimated between 200,000-300,000.[14]

The number of the followers is not so high amongst the Greeks but it has increased during the last decades because of the immigration of people from East Asia in Greece. Today there are three religious centers, in Athens, Thessaloniki and Corinth.

Greece has a growing atheist population. The Atheist Union of Greece (Ένωση Άθεων) is an association of some Greek atheists, however the majority of Greek atheists aren't members of it for various reasons (not accepting the union values, purpose but most of them for not wanting to be part of a union concerning personal belief(s) and self-identification).

Other minor faiths in Greece include Jehovah's Witnesses (who number about 28,000[15]), Seventh-day Adventists, Mormons and Scientologists. Groups that constitute less than 1 percent of the population includes Baha'is.[16]