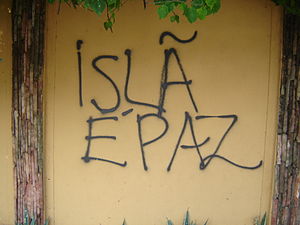 A graffito in Brazil reading "Islam is peace" in Portuguese, photographed in 2007.

Religion of Peace is a political neologism used as a description of Islam. After the September 11, 2001 attacks, some politicians described Islam as a "religion of peace" in an effort to differentiate between Islamic terrorists, Islamism, and non-violent Muslims.[1][2][3]

The Arabic term Islam (إسلام) is derived from aslama, which means "to surrender" or "resign oneself".[4][5] The Arabic word salaam (سلام) ("peace") shares the same consonantal root (s-l-m) with the words Islam and Muslim.[6]

Muslims who are keen to emphasise their rejection of violence have used the phrase "a religion of peace" as a description of Islam, like Dalil Boubakeur, mufti of the Paris Mosque, who said in 2006, "The prophet did not found a terrorist religion, but a religion of peace."[7] After the 7/7 London bombings, some Muslims in the West increased their efforts to present Islam as a peaceful religion.[8]

Clearly Islam the religion is not the cause of terrorism. Islam, as I said, is a religion of peace. However through the centuries, deviations from the true teachings of Islam take place. And so [people who call themselves] "Muslims" kill despite the injunction of their religion against killing especially of innocent people.[1]

In September 2001, in the wake of the September 11 attacks, U.S. President George W. Bush publicly endorsed the view that that "Islam is peace":

The English translation is not as eloquent as the original Arabic, but let me quote from the Koran, itself: "In the long run, evil in the extreme will be the end of those who do evil. For that they rejected the signs of Allah and held them up to ridicule." The face of terror is not the true faith of Islam. That's not what Islam is all about. Islam is peace. These terrorists don't represent peace. They represent evil and war.[9]

This prompted criticism from some quarters[10] and a poll of United States Evangelical Protestant leaders taken in 2002 revealed that only 10% agreed with Bush that Islam was synonymous with peace.[11]

The description of Islam as a "religion of peace" has created a great deal of controversy. Neuroscientist and New Atheism writer Sam Harris wrote, "The position of the Muslim community in the face of all provocations seems to be: Islam is a religion of peace, and if you say that it isn't, we will kill you."[12]

Sherman Jackson believes that the comments of Western politicians about Islam being a "religion of peace" is an attempt at political correctness. However, Jackson asserts that:

"Religion of peace" does not imply that Islam is a paciﬁst religion, that it rejects the use of violence altogether, as either a moral or a metaphysical evil. "Religion of peace" connotes, rather, that Islam can countenance a state of permanent, peaceful coexistence with other nations and peoples who are not Muslims...This position, I shall argue, is no more than the result of an objective application of principles of Islamic jurisprudence which no jurist or activist, medieval or modern, has claimed to reject.[13]

This use has also been criticized by influential Islamist Sayyid Qutb, who wrote:

The term "The Religion of Peace" is used sarcastically by critics of Islam, such as right-wing commentator Ann Coulter.[3]

When asked by reporters in 2005 if Islam was a religion of peace, Pope Benedict XVI declined to "apply generic labels" but stated:

It certainly contains elements that can favor peace, it also has other elements: We must always seek the best elements.[15][unreliable source?]

On May 13, 2015, the Islamic State (ISIS) terrorist organization released an audio message purporting to come from the mouth of the group's caliph Abu Bakr al-Baghdadi, who asserted that Islam is not a religion of peace, but rather the religion of violence: