The RFRA was held unconstitutional by the United States Supreme Court, as applied to the states in the City of Boerne v. Flores decision in 1997, which ruled that the RFRA is not a proper exercise of Congress's enforcement power. However, it continues to be applied to the federal government—for instance, in Gonzales v. O Centro Espirita Beneficente Uniao do Vegetal and Burwell v. Hobby Lobby Stores, Inc.—because Congress has broad authority to carve out exemptions from federal laws and regulations that it itself has authorized. In response to City of Boerne v. Flores and other related RFR issues, twenty-one individual states have passed State Religious Freedom Restoration Acts that apply to state governments and local municipalities.[3]

This law reinstated the Sherbert Test, which was set forth by Sherbert v. Verner, and Wisconsin v. Yoder, mandating that strict scrutiny be used when determining whether the Free Exercise Clause of the First Amendment to the United States Constitution, guaranteeing religious freedom, has been violated. In the Religious Freedom Restoration Act, Congress states in its findings that a religiously neutral law can burden a religion just as much as one that was intended to interfere with religion;[4] therefore the Act states that the “Government shall not substantially burden a person’s exercise of religion even if the burden results from a rule of general applicability.”[5] 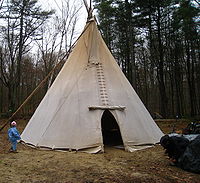 This tipi is used for Peyote ceremonies in the Native American Church, one of the main religions affected by the Religious Freedom Restoration Act

The Free Exercise Clause of the First Amendment states that Congress shall not pass laws prohibiting the free exercise of religion. In the 1960s, the Supreme Court interpreted this as banning laws that burdened a person's exercise of religion (e.g. Sherbert v. Verner, 374 U.S. 398 (1963); Wisconsin v. Yoder, 406 U.S. 205 (1972)). But in the 1980s the Court began to allow legislation that incidentally prohibited religiously mandatory activities as long as the ban was "generally applicable" to all citizens. Also, the American Indian Religious Freedom Act, intended to protect the freedoms of tribal religions, was lacking enforcement. This led to the key cases leading up to the RFRA, which were Lyng v. Northwest Indian Cemetery Protective Association, 485 U.S. 439 (1988), and Employment Division v. Smith, 494 U.S. 872 (1990). In Lyng, the Court was unfavorable to sacred land rights. Members of the Yurok, Tolowa and Karok tribes tried to use the First Amendment to prevent a road from being built by the U.S. Forest Service through sacred land. The land that the road would go through consisted of gathering sites for natural resources used in ceremonies and praying sites. The Supreme Court ruled that this was not an adequate legal burden because the government was not coercing or punishing them for their religious beliefs.[8] In Smith the Court upheld the state of Oregon's refusal to give unemployment benefits to two Native Americans fired from their jobs at a rehab clinic after testing positive for mescaline, the main psychoactive compound in the peyote cactus, which they used in a religious ceremony. Peyote use has been a common practice in Native American tribes for centuries. It was integrated with Christianity into what is now known as the Native American Church.[9]

The Smith decision outraged the public. Many groups came together. Both liberal (like the American Civil Liberties Union) and conservative groups (like the Traditional Values Coalition) as well as other groups such as the Christian Legal Society, the American Jewish Congress, the Baptist Joint Committee for Religious Liberty, and the National Association of Evangelicals joined forces to support RFRA, which would reinstate the Sherbert Test, overturning laws if they burden a religion.[10] The act, which was Congress's reaction to the Lyng and Smith cases, passed the House unanimously and the Senate 97 to 3 and was signed into law by U.S. President Bill Clinton.

The RFRA applies "to all Federal law, and the implementation of that law, whether statutory or otherwise", including any Federal statutory law adopted after the RFRA's date of signing "unless such law explicitly excludes such application."[11]

The Peyote cactus, the source of the mescaline used by Native Americans in religious ceremonies.

In 1997, part of this act was overturned by the United States Supreme Court. The Roman Catholic Archdiocese of San Antonio wanted to enlarge a church in Boerne, Texas. But a Boerne ordinance protected the building as a historic landmark and did not permit it to be torn down. The church sued, citing RFRA, and in the resulting case, City of Boerne v. Flores, 521 U.S. 507 (1997), the Supreme Court struck down the RFRA with respect to its applicability to States (but not Federally), stating that Congress had stepped beyond their power of enforcement provided in the Fourteenth Amendment.[10] In response to the Boerne ruling, Congress passed the Religious Land Use and Institutionalized Persons Act (RLUIPA) in 2000, which grants special privileges to religious land owners.[12]

The Act was amended in 2003 to only include the federal government and its entities, such as Puerto Rico and the District of Columbia.[13] A number of states have passed state RFRAs, applying the rule to the laws of their own state, but the Smith case remains the authority in these matters in many states.[14]

The constitutionality of RFRA as applied to the federal government was confirmed on February 21, 2006, as the Supreme Court ruled against the government in Gonzales v. O Centro Espirita Beneficente Uniao do Vegetal, 546 U.S. 418 (2006), which involved the use of an otherwise illegal substance in a religious ceremony, stating that the federal government must show a compelling state interest in restricting religious conduct.

Post-Smith, many members of the Native American Church still had issues using peyote in their ceremonies. This led to the Religious Freedom Act Amendments in 1994, which state, "the use, possession, or transportation of peyote by an Indian for bona fide traditional ceremony purposes in connection with the practice of a traditional Indian religion is lawful, and shall not be prohibited by the United States or any state. No Indian shall be penalized or discriminated against on the basis of such use, possession or transportation."[5]

The Religious Freedom Restoration Act holds the federal government responsible for accepting additional obligations to protect religious exercise. In O'Bryan v. Bureau of Prisons it was found that the RFRA governs the actions of federal officers and agencies and that the RFRA can be applied to "internal operations of the federal government."[15] RFRA, in conjunction with President Bill Clinton's Executive Order in 1996, provided more security for sacred sites for Native American religious rites.[5]

As of 1996, the year before the RFRA was found unconstitutional as applied to states, 337 cases had cited RFRA in its three-year time range.[16] It was also found that Jewish, Muslim, and Native American religions, which make up only three percent of religious membership in the U.S., make up 18 percent of the cases involving the free exercise of religion.[16] The Religious Freedom Restoration Act was a cornerstone for tribes challenging the National Forest Service’s plans to permit upgrades to Snow Bowl Ski Resort. Six tribes were involved, including the Navajo, Hopi, Havasupai, and Hualapai. The tribes objected on religious grounds to the plans to use reclaimed water. They felt that this risked infecting the tribal members with “ghost sickness” as the water would be from mortuaries and hospitals. They also felt that the reclaimed water would contaminate the plant life used in ceremonies. In August 2008, the Ninth Circuit Court of Appeals rejected their RFRA claim.[17][18]

In the case of Adams v. Commissioner, the United States Tax Court rejected the argument of Priscilla M. Lippincott Adams, who was a devout Quaker. She tried to argue that under the Religious Freedom Restoration Act of 1993, she was exempt from federal income taxes. The U.S. Tax Court rejected her argument and ruled that she was not exempt. The Court stated: "...while petitioner's religious beliefs are substantially burdened by payment of taxes that fund military expenditures, the Supreme Court has established that uniform, mandatory participation in the Federal income tax system, irrespective of religious belief, is a compelling governmental interest."[19] In the case of Miller v. Commissioner, the taxpayers objected to the use of social security numbers, arguing that such numbers related to the "mark of the beast" from the Bible. In its decision, the U.S. Court discussed the applicability of the Religious Freedom Restoration Act of 1993, but ruled against the taxpayers.[20]

The RFRA figured prominently in oral arguments in the case, Burwell v. Hobby Lobby, heard by the Supreme Court on March 25, 2014.[21] In a 5-4 decision, Justice Alito declared that nothing about the language of RFRA or the manner in which Congress passed it implied the statutory protections conferred therein were confined solely within the bounds of First Amendment case law as it existed pre-Smith.[22]

A day-long symposium was held at the Newseum in Washington, D.C., on Nov. 7, 2013, to commemorate the 20th anniversary of the Religious Freedom Restoration Act. "Restored or Endangered? The State of the Free Exercise of Religion in America" featured three panel discussions and two keynote addresses.

The first keynote address was from Oliver S. Thomas, the former general counsel of the Baptist Joint Committee for Religious Liberty and the chair of the diverse “Coalition for the Free Exercise of Religion” in the 1990s that worked for the passage of RFRA. The second was from Douglas Laycock, who was an author of RFRA. His address traced the legal history of RFRA and discussed its impact on current debates, including the contraception mandate and same-sex marriage laws.

The panel discussions covered the history and impact of RFRA, religious freedom and the contraceptive mandate of the Affordable Care Act, and current and future challenges to the free exercise of religion in a diverse society. The addresses and panel discussions are all available online, as well as a special downloadable resource with more on RFRA, published by the Baptist Joint Committee.[23]