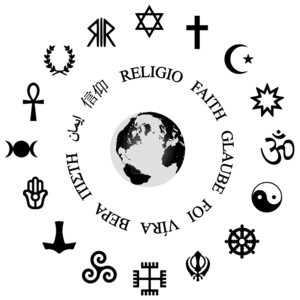 Religion is a collection of cultural systems, beliefs, and world views that establishes symbols that relate humanity to spirituality and, sometimes to moral values. While religion is hard to define, one standard model of religion, used in religious studies courses, was proposed by Clifford Geertz, who simply called it a "cultural system."[1] A critique of Geertz's model by Talal Asad categorized religion as "an anthropological category."[2] Many religions have narratives, symbols, traditions, and sacred histories that are intended to give meaning to life or to explain the origin of life or the universe. They tend to derive morality, ethics, religious laws, or a preferred lifestyle from their ideas about the cosmos and human nature. According to some estimates, there are roughly 4,200 religions in the world.[3]

The word religion is sometimes used interchangeably with "faith" or "belief system", but religion differs from private belief in that it has a public aspect. Most religions have organized behaviors, including clerical hierarchies, a definition of what constitutes adherence or membership, congregations of laity, regular meetings or services for the purposes of veneration of a deity or for prayer, holy places (either natural or architectural), and/or religious texts. Certain religions also have a sacred language often used in liturgical services. The practice of a religion may also include sermons, commemoration of the activities of a god or gods, sacrifices, festivals, feasts, trance, initiations, funerals, marriages, meditation, music, art, dance, public service, or other aspects of human culture. Religious beliefs have also been used to explain parapsychological phenomena such as out-of-body experiences, near-death experiences and reincarnation, along with many other paranormal experiences.[4][5]

Some academics studying the subject have divided religions into three broad categories: world religions, a term which refers to transcultural, international faiths; indigenous religions, which refers to smaller, culture-specific or nation-specific religious groups; and new religious movements, which refers to recently developed faiths.[6] One modern academic theory of religion, social constructionism, says that religion is a modern concept that suggests all spiritual practice and worship follows a model similar to the Abrahamic religions as an orientation system that helps to interpret reality and define human beings,[7] and thus religion, as a concept, has been applied inappropriately to non-Western cultures that are not based upon such systems, or in which these systems are a substantially simpler construct.

A group of monotheistic traditions sometimes grouped with one another for comparative purposes, because all refer to a patriarch named Abraham.

Certain Christian groups are difficult to classify as "Eastern" or "Western."

Many Gnostic groups were closely related to early Christianity, for example, Valentinism. Irenaeus wrote polemics against them from the standpoint of the then-unified Catholic Church.[8]

The Yazidis are a syncretic Kurdish religion with a Gnostic influence:

None of these religions are still extant.

Samaritans use a slightly different version of the Pentateuch as their Torah, worshiping at Mount Gerizim instead of Jerusalem, and are possibly the descendants of the lost Northern Kingdom. They are definitely of ancient Israelite origin, but their status as Jews is disputed.[9]

Indian religions are the religions that originated in the Indian subcontinent; namely Hinduism, Jainism, Buddhism and Sikhism and religions and traditions related to, and descended from, them.

African diasporic religions are a number of related religions that developed in the Americas among African slaves and their descendants in various countries of the Caribbean Islands and Latin America, as well as parts of the southern United States. They derive from African traditional religions, especially of West and Central Africa, showing similarities to the Yoruba religion in particular.

Traditionally, these faiths have all been classified "Pagan", but scholars prefer the terms "indigenous/primal/folk/ethnic religions".