Religious views on smoking vary widely. Indigenous peoples of the Americas have traditionally used tobacco for religious purposes, while Abrahamic and other religions have only been introduced to the practice in recent times due to the European colonization of the Americas in the 16th century. 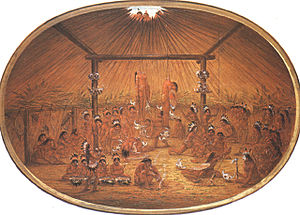 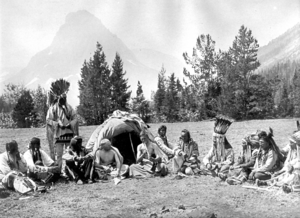 Communal smoking of a sacred pipe is a religious ceremony in many Native American cultures, while other tribes are traditionally social smokers only. In some cases tobacco is smoked, in other cases, kinnikinnick, or a combination of the two. Semaa, the Anishinaabe word for tobacco, is grown for ceremonial use and used to send prayers to the Creator.[1] The tobacco used during these rituals varies widely in potency—the Nicotiana rustica species used in South America, for instance, has up to twice the nicotine content of the common North American N. tabacum.

With the exception of a few Christian denominations, the Abrahamic religions originated before tobacco smoking was introduced to Europe from the New World. Therefore, these religions do not address it in their foundational teachings; however, modern practitioners have offered interpretations of their faith with regard to smoking.

Johann Sebastian Bach was known to enjoy smoking a pipe, and wrote poetry on how doing so enhanced his relationship with God.[2] By the turn of the 19th century, smoking was considered an immoral habit by certain Christian preachers and social reformers.[citation needed] Tobacco was listed, along with drunkenness, gambling, cards, dancing and theatre-going, in J.M. Judy's Questionable Amusements and Worthy Substitutes, a book featuring anti-smoking dialogue which was published in 1904 by the Western Methodist Book of Concern.

Though there is no official canonical prohibition regarding the use of tobacco, the more traditional among the Eastern Orthodox Churches forbid their clergy or monastics to smoke, and the laity are strongly encouraged to give up this habit, if they are subject to it. One who smokes is considered to be polluting the "Temple of the Holy Spirit" (i.e., the body), which has been sanctified by the reception of the Sacred Mysteries (Sacraments). (The view of the body being the "temple of the Holy Spirit" is also common in Protestant circles, and is quoted as a basis against not only tobacco use, but recreational drugs, eating disorders, sexual immorality, and other vices which can be harmful to the body. The bible reference is I Corinthians 6:7-20. In Orthodox cultures, various derogatory terms have developed to describe smoking, such as "incense of Satan". Father Alexander Lebedeff described the Orthodox approach as follows:

You ask, "Are there canons that speak to the issues of … tobacco?" I would ask you, where are the Canons that forbid use of marijuana or snorting cocaine or downloading pornography from the Internet? Obviously, there are none. Does this mean that your innate Orthodox common sense should not be enough to guide you to recognize what is healthy and what is not? The Canons should not be considered a compendium of answers to all possible questions. God gave us a mind and a conscience and we should use them to determine what is right and what is wrong, whether or not the particular yes issue has been addressed in the canons or not.
Smoking tobacco is a disgusting, filthy, addictive habit that turns the mouth of the smoker into an ashtray. It not only poisons the body of the smoker but pollutes the air that others around the smoker breathe. It is absolutely incompatible with the dignity of the Orthodox Priesthood, diaconate, or monastic state, whether the Canons specifically address it or not.[3]

The Roman Catholic Church does not condemn smoking, but considers excessive smoking to be sinful, as described in the Catechism (CCC 2290):

The virtue of temperance disposes us to avoid every kind of excess: the abuse of food, alcohol, tobacco, or medicine.

Jehovah's Witnesses have not permitted any active members to smoke since 1973,[4] and their literature has warned about physical and spiritual dangers of smoking.[5] In 2014, these warnings were expanded to include electronic cigarettes.[6]

The Seventh-day Adventist Church requires that its members to abstain from tobacco use.[7] It has also called for governments to enact policies that include "a uniform ban on all tobacco advertising, stricter laws prohibiting smoking in non-residential public places, more aggressive and systematic public education, and substantially higher taxes on cigarettes."[8]

The founder of the Latter Day Saint movement, Joseph Smith, recorded that on February 27, 1833 he received a revelation which addressed tobacco use. It is commonly known as the Word of Wisdom, found in section 89 of the Doctrine and Covenants, and prohibits the smoking or chewing of tobacco. (Section 89) While initially viewed as a guideline, this was eventually accepted as a commandment by The Church of Jesus Christ of Latter-day Saints. The Word of Wisdom is also practiced to various degrees by other Latter Day Saint denominations.

In the 1890s, Shi'a clerics led a revolt against Western tobacco companies operating in Persia. However, their Islamic tobacco protest was motivated by a concern for what would today be called protectionism or economic justice. More recently, such tobacco fatwa (Islamic legal pronouncements) have been issued due to health concerns.

The holy book of Islam, the Qur'ān, does not specifically prohibit or denounce smoking, but gives behavioral guidance:

In practice, at least one recent survey (Abbottabad, Pakistan) found that observant Muslims tend to avoid smoking.[9] A study of young Muslim Arab-Americans found that Islamic influences were correlated with some diminished smoking.[10] Conversely, an Egyptian study found that knowledge of an anti-smoking fatwa did not reduce smoking.[11] Overall, the prevalence of smoking is increasing in Islamic countries.

The prominent scholar Yusuf al Qaradawi argues that smoking is no longer an issue of dispute among Islamic scholars due to the knowledge of health risks.

The reported juristic disagreement among Muslim scholars on the ruling concerning smoking, since its appearance and spread, is not usually based on differences between legal proofs, but on the difference in the verification of the cause on which the ruling is based. They all agree that whatever is proved to be harmful to the body and mind is prohibited, yet they differ whether this ruling applies to smoking. Some of them claimed that smoking has some benefits, others assured that it had few disadvantages compared to its benefits, whereas a third group maintained that it had neither benefits nor bad effects. This means that if scholars had been certain about the harmfulness of smoking, then they would undoubtedly have considered it prohibited.[…]

Second: Our inclination to consider smoking prohibited does not mean that it is as grave as major sins like adultery, drinking alcohol or theft. In fact, prohibited matters in Islam are relative; some of them are minor prohibitions whereas others are major, and each has its own ruling. The major sins, for example, have no expiation other than sincere repentance. However, the minor sins can be expiated by the Five Prayers, the Friday Prayer, the Fasting of Ramadan, the Night Vigil Prayer in Ramadan, and other acts of worship. They can also be expiated by avoiding the major sins.[12]

Modern Sharia law is drawn from the Qur'ān, other traditional sources, and interpretation (e.g., ijtihad). Given the broad range of Islamic legal thought and different understandings of the health effects of smoking by Islamic scholars, there is a diversity of Islamic opinion about cigarette smoking. Some rulings suggest that smoking is permitted insofar as it may enhance the fulfillment of one's (religiously-ordained) duties. Nonetheless, contemporary rulings tend to condemn smoking as potentially harmful or prohibit (haram) smoking outright as a cause of severe health damage. Arab Muslims tend to prohibit smoking (despite Saudi Arabia ranking 23rd in the world for the percentage of its population that smokes)[13] and, in South Asia, smoking tends to be considered lawful but discouraged:[14]

In many parts of the Arabic speaking world, the legal status of smoking has further changed during recent years, and numerous religious edicts or fatawa, including from notable authorities such as Al-Azhar University in Egypt, now declare smoking to be prohibited. The reasons cited in support of the reclassification of smoking as prohibited include Islamic law's general prohibition of all actions that result in harm. For example, the Quran says, "And spend of your substance in the cause of God, and make not your own hands contribute to your own destruction (2; 195)." Additionally, jurists rely on the exhortations in the Koran not to waste money. Greater appreciation of the risks associated with passive smoking, has also led recent jurists to cite the obligation to avoid causing willful annoyance, distress, or harm to other people.[14]

Rabbi Yisrael Meir Kagan (1838–1933) was one of the first Jewish authorities to speak out on smoking. He considered it a health risk and a waste of time, and had little patience for those who claimed addiction, stating that they never should have started smoking in the first place (Likutei Amarim 13, Zechor le-Miriam 23).

A shift toward health-oriented concerns may be observed in different rabbinic interpretations of Jewish law (halakha). For instance, at a time when the link between smoking and health was still in doubt, Rabbi Moshe Feinstein issued an influential opinion in 1963 stating that smoking was permitted, although still inadvisable. (Igrot Moshe Y.D. II:49)

More recently, rabbinic responsa tend to argue that smoking is prohibited as self-endangerment under Jewish law and that smoking in indoor spaces should be restricted as a type of damage to others. The self-endangerment rule is grounded partly on a Biblical verse that is read as an injunction to watch one's health - "ונשמרתם מאד, לנפשתיכם" [Vi'nish'martem Me'od Li'naf'sho'tey'chem] Deut. 04:15 "And you shall watch yourselves very well..." Similarly, rabbinic rules against damaging others are traced back to Biblical and Talmudic laws.

Famous Ashkenazi Haredi rabbis have called on people not to smoke and called smoking an 'evil habit.' These rabbis include Rabbi Yosef Sholom Eliashiv, Rabbi Aharon Leib Shteinman, Rabbi Moshe Shmuel Shapiro, Rabbi Michel Yehuda Lefkowitz, Rabbi Nissim Karelitz, and Rabbi Shmuel Auerbach. Rabbi Shmuel HaLevi Wosner forbade people from starting to smoke and said that those who smoke should stop doing so. All of these rabbis also said that it is forbidden to smoke in a public place, where others might be bothered by it.[15]

While not explicitly prohibited in Hinduism, tobacco use is seen as a kind of intoxication, and as such should not be done in public. Vaishnavas of ISKCON, founded by A.C. Bhaktivedanta Swami Prabhupada in 1966, are prohibited from using tobacco.

A legend states that when Guru Gobind Singh Ji was riding his blue horse, Neela, it would not enter a tobacco field and reared up in front of it.[17]

Using tobacco was condemned by all orthodox Zoroastrians due to its perceived abuse of fire.