Remagen is a town in Germany in the Land Rhineland-Palatinate, in the district of Ahrweiler. It is about a one-hour drive from Cologne, just south of Bonn, the former West German capital. It is situated on the left (western) bank of the River Rhine. There is a ferry across the Rhine from Remagen every 10–15 minutes in the summer. Remagen has many beautiful and well-maintained buildings, churches, castles and monuments. It also has a sizeable pedestrian zone with plenty of shops.

Overlooking the west bank of the Rhine just north of the city centre is the Apollinariskirche. It has a great observation deck that is only open to parishioners on Sundays. Pedestrians reach the church via a dirt trail that passes a series of roadside monuments representing each of the fourteen Stations of the Cross. The church grounds contain an outdoor crypt and an abbey. Further down the river is one of the many castles along the River Rhine, perched even higher than the Apollinariskirche.

The Roman Empire built a border fort at Rigomagus (or Ricomagus), west of the Rhine. This was about 12 miles north of the site of the first bridge ever built across the Rhine (at Neuwied). This bridge fought the river current by being built on timbers which were driven into the bed at a slant. Caesar's troops spent nearly three weeks on the east side of the river, then crossed back over, destroying the bridge to prevent its use by German raiders. A second bridge was likewise destroyed by the builders once they were through with it.

The fort was one of a series built by Drusus, commander of the Roman army along the Rhine. Other Roman construction survived the centuries, including a gateway and Remagen became a tourist destination, popular with history buffs.

Local legend says that a ship carrying various relics from Milan to Cologne was stopped in the river in 1164, unable to move despite the strong current, until it mysteriously edged in toward the shore. The remains of St Apollinaris were put ashore, and the ship was then able to sail onward. These remains were interred in a chapel which had been part of the Roman fort, which became the basis for a church which bore his name, and was rebuilt several times over the years.

The Bridge at Remagen

The Ludendorff Bridge was originally built during World War I as a means of moving troops and logistics west over the Rhine to reinforce the Western Front. The bridge was designed by Karl Wiener, an architect from Mannheim. It was 325 metres (1,066 ft) long, had a clearance of 14.8 metres (49 ft) above the normal water level of the Rhine, and its highest point measured 29.25 metres (96.0 ft). The bridge was designed to be defended by troops with towers on each bank with machine gun slits in the towers. The bridge carried two railway tracks and a pedestrian walkway. During World War II, one track was planked over to allow vehicular traffic.

Capture of the bridge

During Operation Lumberjack, on 7 March 1945, troops of the U.S. Army's 9th Armored Division reached the Ludendorff Bridge during the closing weeks of World War II and were very surprised to see that the railroad bridge was still standing. It was the last of 22 road and railroad bridges over the Rhine still standing after German defenders failed to demolish it. U.S. forces were able to capture the bridge. The unexpected availability of the first major crossing of the Rhine, Germany's last major natural barrier and line of defense, caused Allied high commander Dwight Eisenhower to alter his plans to end the war and possibly shortened the war in Europe.[2][3]

The ability to quickly establish a bridgehead on the eastern side of the Rhine and to get forces into Germany allowed the U.S. forces to envelop the German industrial area of the Ruhr more quickly than planned. The Allies were able to get six divisions across the bridge before it collapsed on 17 March 1945, ten days after it was captured. The collapse killed 18 U.S. Army Engineers.[4]

A large number of books and articles in newspapers and magazines on the battle for the bridge have been published. The best-known work on the battle is 1957's The Bridge at Remagen by the American author Ken Hechler.[5] In 1968 David L. Wolper produced an American motion picture, The Bridge at Remagen. The film depicts historical events, but is fictional in all other aspects.[6]

Hans Peter Kürten, at that time Mayor of Remagen, had long considered the idea of constructing a memorial. The negotiations with the German Federal Railway alone lasted seven years before the city could finally acquire the former railway property. Announcements sent to government officials concerning the intended preservation of the bridge towers and the construction of a Memorial to Peace stirred no interest.

In the summer of 1976, it was necessary to remove the still intact bridge support pilings in the river. The mayor had the stones deposited on the Remagen river bank, with the idea in mind of selling small pieces of the bridge stones enclosed in synthetic resin and containing a certificate of authenticity.

There has not been another bridge built across the Rhine here, mainly due to opposition from the people of Remagen (and surrounding areas), contending that a bridge located at this point along the Rhine would spoil the view. 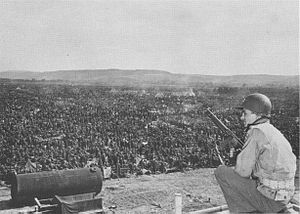 In 1945, the U.S. built one of the many enclosures on the west bank of the Rhine—the so-called Rheinwiesenlager—close to Remagen. The camps were used by the Allies to house captured German soldiers. Several thousand prisoners are estimated to have died in the various camps, including 1,212 who are now buried in the Bad Bodendorf Cemetery.[7]

The Apollinaris Church was built 1839-1842 on the site of the medieval Church of St. Martin. The frescos on the inside of the neo-Gothic church were painted by members of the artists group called the "Nazarenes". Three cycles show the life of Jesus, the life of Mary, and the history of Saint Apollinaris, legendary Bishop of Ravenna. In the crypt is a silver bust of the saint, which is raised from the sarcophagus every year at the pilgrimage time at the end of July. From the statue of Saint Francis of Assisi on top of the church, there is a lovely view of Remagen and the romantic Rhine Valley. 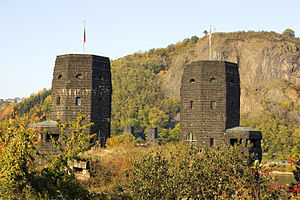 The museum is housed in the towers of the famous bridge built between 1916 and 1918. It opened in 1980 and tells the story of the bridge and the US prisoner of war camp known as the Golden Mile, on the eponymous plain.

The historic railway station at Rolandseck about 5 km north of Remagen, now houses a museum devoted to the work of Hans Arp. The 19th century railway station - itself a classic example of early German railway architecture - was transformed into a cultural venue for all the arts in the 19th century. Johannes Brahms, Clara Schumann and Franz Liszt gave concerts there. George Bernard Shaw staged his plays there. The young poet Guillaume Apollinaire even fell in love there. Neglected, the building was listed for demolition after World War II, but in 1964 the Bonn art dealer Johannes Wasmuth brought it back to life. Musicians such as Martha Argerich, Stefan Askenase, and Yehudi Menuhin, artists such as Hans Arp, Oskar Kokoschka and Günther Uecker, and performers such as Marcel Marceau have all appeared there.[8]