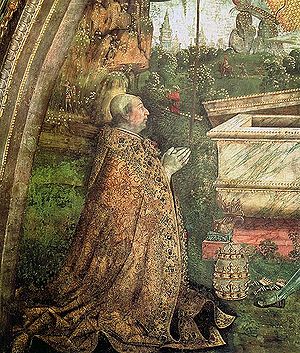 The Renaissance Papacy was a period of papal history between the Western Schism and the Protestant Reformation. From the election of Pope Martin V of the Council of Constance in 1417 to the Reformation, Western Christianity was largely free from schism as well as significant disputed papal claimants. Although there were important divisions over the direction of the religion, these were resolved through the then-settled procedures of the papal conclave.

The popes of this period were a reflection of the College of Cardinals that elected them. The College was dominated by cardinal-nephew (relatives of the popes that elevated them), crown-cardinal (representatives of the Catholic monarchies of Europe), and members of the powerful Italian families. There were two popes each from the House of Borgia, House of della Rovere, and House of Medici during this period. The wealthy popes and cardinals increasingly patronized Renaissance art and architecture, (re)building the landmarks of Rome from the ground up.

The Papal States began to resemble a modern nation-state during this period, and the papacy took an increasingly active role in European wars and diplomacy. Popes were more frequently called upon to arbitrate disputes between competing colonial powers than to resolve complicated theological disputes. To the extent that this period is relevant to modern Catholic dogma, it is in the area of papal supremacy. None of these popes have been canonized as a saint, or even regarded as Blessed or Venerable.

Although the characteristics of the Renaissance papacy developed before the end of the Western Schism and to some extent continued into the Reformation, the period 1417–1534 is a rough approximation used by scholars to date this period. There were 14 popes during this period.

In 1420, the papacy returned to Rome under Martin V. The Renaissance popes pursued the temporal interests of the Papal States in Italian politics aggressively.[1] In addition to being the head of the Church, the Pope became one of Italy's most important secular rulers, signing treaties with other sovereigns and fighting wars. In practice, though, most of the territory of the Papal States was still only nominally controlled by the Pope with much of the territory being ruled by minor princes. Control was often contested; indeed it took until the 16th century for the Pope to have any genuine control over all his territories.

The popes of this period used the papal military not only to enrich themselves and their families, but also to enforce and expand upon the longstanding territorial and property claims of the papacy as an institution.[2] Although before the Western Schism the papacy had derived much of its revenue from the "vigorous exercise of its spiritual office," during this period the popes were financially dependent on the revenues from the Papal States themselves.[3] With ambitious expenditures on war and construction projects, popes turned to new sources of revenue from the sale of indulgences and bureaucratic and ecclesiastical offices .[3] Pope Clement VII's diplomatic and military campaigns resulted in the Sack of Rome in 1527.[4]

Pope Julius II become known as "the Warrior Pope" for his use of bloodshed to increase the territory and property of the papacy.[1] Julius II continued the consolidation of power in the Papal States and continued the process of rebuilding Rome physically. The most prominent project among many was the rebuilding of St. Peter's Basilica.

The popes of this period became absolute monarchs, but unlike their European peers, they were not hereditary, so they could only promote their family interests through nepotism.[5] The word nepotism originally referred specifically to the practice of creating cardinal-nephews, when it appeared in the English language about 1669.[6] According to Duffy, "the inevitable outcome of all of this was a creation of a wealthy cardinalatial class, with strong dynastic connections."[7]

According to Eamon Duffy, "the Renaissance papacy invokes images of a Hollywood spectacular, all decadence and drag. Contemporaries viewed Renaissance Rome as we now view Nixon's Washington, a city of expense-account whores and political graft, where everything and everyone had a price, where nothing and nobody could be trusted. The popes themselves seemed to set the tone."[7] For example, Leo X was said to have remarked: "Let us enjoy the papacy, since God has given it to us."[5] Several of these popes took mistresses and fathered children and engaged in intrigue or even murder.[7] Alexander VI had four acknowledged children, including Cesare Borgia and Lucrezia Borgia.

Because the popes had been in Avignon or divided by schism since 1309, Rome remained architecturally underdeveloped from both a utilitarian and artistic perspective.[8] According to Duffy, "Rome had no industries except pilgrimage, no function except as the pope's capital."[8] The patronage of arts and architecture was both a matter of papal policy—to increase the prestige of the institution as a whole—and the personal preferences of individual popes.[5] Leo X is well known for his patronage of Raphael, whose paintings played a large role in the redecoration of the Vatican. Pope Sixtus IV initiated a major drive to redesign and rebuild Rome, widening the streets and destroying the crumbling ruins, commissioning the Sistine Chapel, and summoning many artists from other Italian city-states. Pope Nicholas V founded the Vatican Library. 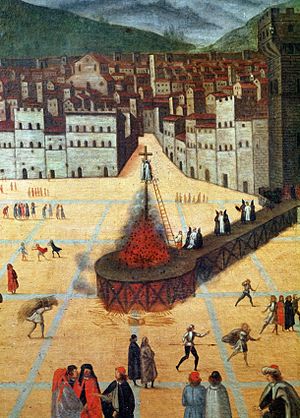 The execution of Savonarola

The "inquisitorial machinery" to deal with heresy remained largely unchanged from the thirteenth century.[1] The two main movements unsuccessfully suppressed during this period were John Wycliffe's Lollardy and Jan Hus's Hussitism.[1] Voices critical of the worldliness of the papacy—such as Savonarola in Florence—were excommunicated.[9] Critics such as Desiderius Erasmus, who remained committed to reform rather than schism, were treated more favorably.[10] The revival of Greek literature during this period made Platonism fashionable again in Catholic intellectual circles.[7]

This was a period of declining religiosity among popes. Although Adrian VI said mass every day for the year he was pope, there is no evidence that his two predecessors—Julius II and Leo X—ever celebrated mass at all.[11]

The reforms of the Council of Constance were unambitious and unenforced.[1] Conciliarism—a movement to assert the authority of ecumenical councils over popes—was also defeated; papal supremacy was maintained and strengthened at the expense of the papacy's moral prestige.[1] The role of the College of Cardinals in theological and temporal policy making also declined during this period.[12] According to Duffy, "the one place where the cardinals were supreme was in Conclave."[7]

The perceived abuses of this period, such as the selling of indulgences, were piled upon pre-existing theological differences and calls for reform, culminating in the Protestant Reformation.[13] Leo X and Adrian VI "failed utterly to grasp the seriousness" of the support of Martin Luther in Germany, and their response to the rise Protestantism was ineffective.[14]