From Infogalactic: the planetary knowledge core
Jump to: navigation, search
For the county and lieutenancy area, see Renfrewshire (historic).

Renfrewshire (/ˈrɛnfruːʃɪər/ or /-ʃər/; Scottish Gaelic: Siorrachd Rinn Friù) is one of 32 council areas of Scotland. Located in the west central Lowlands, it is one of three council areas contained within the boundaries of the historic county of Renfrewshire, the others being East Renfrewshire to the east and Inverclyde to the west. It also shares borders with Glasgow, North Ayrshire and West Dunbartonshire. The term Renfrewshire may also be used to refer to this historic county, also known as the County of Renfrew or Greater Renfrewshire, which remains in use as a registration county and lieutenancy area.

Although containing the traditional county town of Renfrew, from which its name derives, the centre of local government in Renfrewshire is found in the nearby town of Paisley, which is the area's main settlement. Renfrewshire borders the south-west of Glasgow, lying on the south bank of the River Clyde, and contains many of Glasgow's commuter towns and villages.

Present day Renfrewshire borders the south-west of Glasgow and contains many of Glasgow's commuter towns and villages. Renfrewshire also has boundaries with North Ayrshire, East Renfrewshire, Inverclyde and West Dunbartonshire. Although by area one of Scotland's smallest unitary authorities (excluding the cities), it is one of the country's most populous areas, being the fifth largest unitary authority and the ninth largest including the city authorities.

The ancient county of Renfrewshire covered a larger area — including both Inverclyde and East Renfrewshire. This area still exists in the form of a lieutenancy area and registration county, and has a statutory funding board called the Renfrewshire Valuation Joint Board. The county was traditionally based around its seat, the Royal Burgh of Renfrew and as such was also known as the County of Renfrew.

There was also a district named Renfrew which existed between 1975 and 1996. Renfrew District covered a slightly larger area than the present local authority area, and included the towns of Barrhead, Neilston and Uplawmoor, which, following the abolition of Strathclyde Regional Council region in 1996, were transferred into the new East Renfrewshire unitary local authority.

In the 18 September 2014 Scottish Independence Referendum Renfrewshire reported a turnout of 87%, or 117,612 votes. 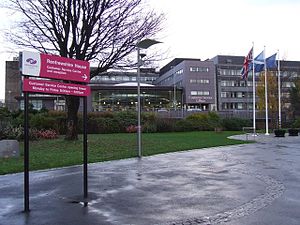 Renfrewshire Council (Scottish Gaelic: Comhairle Shiorrachd Rinn Friù) is the elected local authority for Renfrewshire, which is one of 32 local council areas in Scotland. The council is based at Renfrewshire House in Paisley.

Renfrewshire Council recently (2011) won more awards than any other council in Scotland at the CoSLA Awards ceremony—winning three gold awards (out of seven) with a further three silver awards.[1] This is the highest number of awards ever won by a single Scottish council since CoSLA started handing out its awards.[2]

As such, the election resulted in the Scottish Labour Party gaining full control of the Renfrewshire Council.

There was no overall party in control of Renfrewshire Council so therefore a Scottish National Party/Scottish Liberal Democrats coalition was formed to run the council for that four-year period (2007–2012).

Following the previous council elections in 2003, prior to the introduction of a proportional representation system in council elections across Scotland, Renfrewshire Council was administered by a Labour majority. The results were:[3]

Renfrewshire Council is administered by the Scottish Labour Party. The Provost of Renfrewshire (the council's ceremonial head and convenor) is still to be decided after the 2012 local election. The Leader of the Council, leader of the largest political grouping, is Cllr Mark Macmillan (Labour,Paisley South West)

The council's apolitical employed service is headed by a Chief Executive, who is responsible to the elected council for the delivery of its policies. This executive wing is divided into seven departments: the Chief Executive's Department, Finance and Corporate Services, Education and Leisure Services, Environmental Services, Housing and Property Services, Planning and Transport, and Social Work.[4] Each department is headed by a Director, who is also an apolitical, paid member of staff.[5]

For the purposes of elections to Renfrewshire Council, the Renfrewshire area is divided geographically into a number of wards which then elect either three or four councillors each by the Single Transferable Vote system. The electoral system of local councils in Scotland is governed by the Local Governance (Scotland) Act 2004, an Act of the Scottish Parliament which first introduced proportional representation to councils. These electoral wards, as defined in the Renfrewshire (Electoral Arrangements) Order 2006 (SSI 2006/551)[6] are as follows:

Renfrewshire is home to Scotland's second busiest airport, Glasgow International Airport, at Abbotsinch between Paisley and Renfrew. It is served by the M8 motorway, which terminates in the area, just east of Langbank, and is a major artery between northwest and southwest Scotland, via the Erskine Bridge.

The presence of the airport and the proximity to Glasgow means that Renfrewshire supports one of the busiest transport infrastructures in Scotland, and is frequently congested.

Developments to ease traffic flow have included a lifting of tolls on the Erskine Bridge, plans to extend the rail network to connect to the airport, and the M74 extension – which will handle traffic from Renfrewshire heading south, diverting it away from Glasgow city centre.[7]

Renfrewshire also has good bus links provided by: Mcgills Bus Services and First Buses these are the main bus service operators although there are a few smaller operators.

Places of interest and events 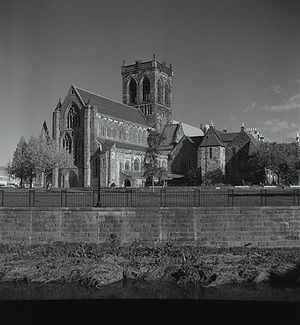 Places of interest include the historic Castle Semple Loch at Lochwinnoch which is part of the Clyde Muirshiel Regional Park, Coats Observatory in Paisley, the Erskine Bridge, the country park at Gleniffer Braes, south of Paisley, St Mirren Park (home of St. Mirren FC), Muirshiel Country Park, Paisley Abbey and the Weaver's Cottage at Kilbarchan, in the care of the National Trust for Scotland.

The Braehead Arena in Renfrewshire close to the boundary with Glasgow is home to leading professional basketball team, the Scottish Rocks, who compete in the British Basketball League. The arena was also host to the 2000 Ford World Curling Championships.

Renfrewshire has 11 secondary schools, 51 primary schools and 3 schools for children with additional support needs. Further education is provided by Paisley Campus of West College Scotland in Paisley, which caters to around 20,000 students. The college also has sites in Inverclyde and West Dumbartonshire.[8]

The University of the West of Scotland is the single higher education provider in Renfrewshire; a new university the UWS was granted university status in 1992 as the University of Paisley. Prior to this, the Paisley Technical College and School of Art was a Central Institution or polytechnic. In 2007 the university merged with Bell College, a further education college in Hamilton, South Lanarkshire and the UWS name was adopted. The university today has sites across the west of Scotland, notably also in Ayr and a joint campus in Dumfries; the main campus remains in Paisley.