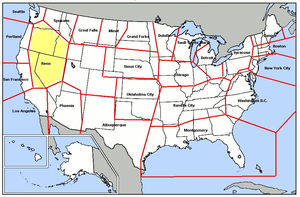 The Reno Air Defense Sector (ReADS) is an inactive United States Air Force organization. Its last assignment was with the 28th Air Division, being stationed at Stead Air Force Base, Nevada.

ReADS was established in February 1959 assuming control of former ADC Western Air Defense Force units in Nevada, most of Oregon east of the Cascade Range; southwestern Idaho and areas of California east of the Sierra Nevada and the northern Central Valley. The organization provided command and control over several aircraft and radar squadrons.

The Sector was inactivated on 1 April 1966 as part of an ADC consolidation and reorganization; and its units were reassigned to the 26th Air Division.