Republic of Bosnia and Herzegovina 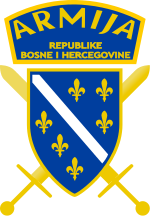 The 1990 parliamentary elections led to a national assembly dominated by three ethnically based parties, which had formed a loose coalition to oust the communists from power. Croatia and Slovenia's subsequent declarations of independence and the warfare that ensued placed Bosnia and Herzegovina and its three constituent peoples in an awkward position. A significant split soon developed on the issue of whether to stay with the Yugoslav federation (overwhelmingly favored among Serbs) or seek independence (overwhelmingly favored among Bosniaks and Croats). A declaration of sovereignty in October 1991 was followed by a referendum for independence from Yugoslavia in February and March 1992. The referendum was boycotted by the great majority of Bosnian Serbs, so with a voter turnout of 64%, 99% of which voted in favor of the proposal, Bosnia and Herzegovina became an independent state.[3]

While the first casualty of the war is debated, significant Serbian offensives began in March 1992 in Eastern and Northern Bosnia. Following a tense period of escalating tensions and sporadic military incidents, open warfare began in Sarajevo on 6 April.[3] International recognition of Bosnia and Herzegovina meant that the Yugoslav People's Army (JNA) officially withdrew from the republic's territory, although their Bosnian Serb members merely joined the Army of Republika Srpska. Armed and equipped from JNA stockpiles in Bosnia, supported by volunteers, Republika Srpska's offensives in 1992 managed to place much of the country under its control.[3] By 1993, when the Croat-Bosniak conflict erupted between the Sarajevo government and the Croat statelet of Herzeg-Bosnia, about 70% of the country was controlled by the Serbs.[4]

In 1993 the authorities in Sarajevo adopted a new language law (Službeni list Republike Bosne i Hercegovine, 18/93): "In the Republic of Bosnia and Herzegovina, the Ijekavian standard literary language of the three constitutive nations is officially used, designated by one of the three terms: Bosnian, Serbian, Croatian."[5]

In March 1994, the signing of the Washington accords between the Bosniak and ethnic-Croatian leaders led to the creation of a joint Bosniak-Croat Federation of Bosnia and Herzegovina. This, along with international outrage at Serb war crimes and atrocities (most notably the Srebrenica genocide of as many as 8,000 Bosniak males in July 1995[6]) helped turn the tide of war. The signing of the Dayton Agreement in Paris by the presidents of Bosnia and Herzegovina (Alija Izetbegović), Croatia (Franjo Tuđman), and FR Yugoslavia (Slobodan Milošević) brought a halt to the fighting, roughly establishing the basic structure of the present-day state. The three years of war and bloodshed had left between 95,000 and 100,000 people dead and more than 2 million displaced.[7]