From Infogalactic: the planetary knowledge core
Jump to: navigation, search
For the next convention, see 2016 Republican National Convention.

Like the Democratic National Convention, it signifies the end of a presidential primary season and the start of campaigning for a general election. In recent years, the nominee has been known well before the convention, leading many to oppose the convention as a mere public relations event and coronation.

Historically, the convention was the final determinant of the nomination, and often contentious as various factions of party insiders maneuvered to advance their candidates. Since the almost universal adoption of the primary election for selecting delegates in the last quarter of the 20th century, however, the convention's significance has diminished. The national party focuses on the convention as a unity point to bring together a party platform and state parties by having delegates vote on issues, which the nominee can then incorporate into their presidential campaign.

In 2004 the convention drew some controversy when over 1800 individuals were arrested by the authorities, a record for a political convention in the U.S.[1] However 90% of those charges were eventually dropped.[1]

The size of delegations to the Republican National Convention are determined by Rule 13 of the party's national rules, which as of 2008 indicate the following:[2]

One alternate delegate is also awarded for each regular delegate except for members of the Republican National Committee.

The composition of the individual state and territory delegations is determined by the bylaws of their respective state and territory parties. Since 1972, almost all have appointed delegates by primary election results, although some, notably Iowa, use caucuses, and others combine the primary with caucuses or with delegates elected at a state convention.

In the past, competing factions of a state party sometimes drew up separate lists of delegates, each claiming to be the official one. One of the first agenda items at a convention is therefore credentialing, whereby the Credentials Committee determines which group is recognized as the official delegation.

To show the calculation of a state's delegation, the following examples are provided:

Texas is the second-most populous state and a GOP stronghold. Its delegation would consist of 155 members, as follows:

California is the most-populous state, but is a Democratic Party stronghold.

The delegation for California would get ten delegates at large, three for the state chair and members of the national committee, and 159 for its 53 seats in the U.S. House, but would not meet any of the other criteria, as the state did not vote for Romney, did not elect a Republican governor in the previous four years or a Republican United States Senator in the previous six years, and did not elect a majority of Republicans to its congressional delegation or either house of its legislature. It would therefore consist of 172 delegates, 11% more than those from Texas.

Wyoming is the least-populous state, and is a GOP stronghold.

The delegation from Wyoming, the least-populous state, would get ten delegates at large, three for the state chair and members of the national committee, three for its one seat in the U.S. House, 6 because it voted for Romney (4.5 + .6, rounded up), one for electing a governor, two for electing a Member of Congress, two for electing a majority of both houses of the state legislature, and two for electing both United States Senators. Thus it would receive 29 delegates, equivalent to 18.7% of the Texas delegation, even though the Census estimate of the 2012 population of Wyoming (576,412), is only 2.21% of that for Texas (26,059,203).

The 1860 convention nominated the first successful GOP presidential candidate, Abraham Lincoln of Illinois. The 1864 event, with the American Civil War raging, was branded as the "National Union Convention" as it included Democrats who remained loyal to the Union and nominated Democrat Andrew Johnson of Tennessee for Vice President.

The 1912 Republican convention saw the business-oriented faction supporting William Howard Taft turn back a challenge from former president Theodore Roosevelt, who boasted broader popular support and even won a primary in Taft's home state of Ohio. Roosevelt would run on the Progressive Party ticket, handing the election to Democrat Woodrow Wilson.

The 1924 Republican convention made history by being the first GOP convention to give women equal representation. This was the first time the Republican Convention was held in Cleveland, Ohio. It was also the first time any convention was broadcast over radio - to nine cities through a special link over long distance telephone lines. [3] The Republican National Committee approved a rule providing for a national committee-man and a national committee-woman from each state. Incumbent President Calvin Coolidge was formally nominated and went on to win the general election. The convention nominated Illinois Governor Frank Lowden for Vice President on the second ballot, but he declined the nomination. This is the only time a nominee refused to accept a vice-presidential nomination, forcing the nomination of someone else, an action that would be unthinkable in years to come.

The Republicans returned to Cleveland in 1936 in the cavernous Cleveland Public Audtorium. Former President Herbert Hoover addressed the delegates on the second day of the convention. On the third, Alf Landon of Kansas (who did not attend) was nominated for President; Col Frank Knox was nominated as Vice Presidential candidate. [4] Landon and Knox were defeated in a landslide by FDR and John Nance Garner. Knox subsequently served as Secretary of the Navy in the Roosevelt administration.

The 1940 convention was the first national convention of any party broadcast on live television. It was carried by an early version of the NBC Television Network, and consisted of flagship W2XBS (now WNBC) in New York City, W3XE (now KYW-TV) in Philadelphia and W2XB (now WRGB) in Schenectady/Albany.

The growing importance of primaries became evident at the 1964 Republican National Convention in San Francisco, where Arizona Senator Barry Goldwater won the nomination, easily turning away Governor William Scranton and others more favorable to the party establishment. 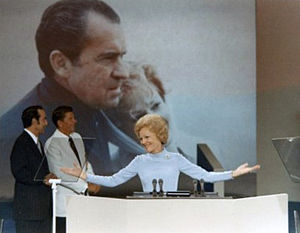 First Lady Pat Nixon speaks to the delegates at the 1972 Republican National Convention. She was the first Republican First Lady to do what is now considered common practice.

Also in 1972, the placing of "Favorite Son" candidate's names into nomination was banned, requiring at least five states' request to do so. Aside from former California Governor Ronald Reagan nearly toppling incumbent President Gerald Ford at the 1976 convention in Kansas City, the last GOP convention where the outcome of the nomination was in doubt, only one candidate's name has been put into nomination, and challengers have been put under intense pressure to withdraw in order for the vote to be unanimous.

Pat Buchanan delivered a speech enthusiastically endorsing the conservative side of the culture war in American society at the 1992 Republican National Convention in Houston. It was widely criticized for supposedly alienating liberal and centrist voters who might otherwise have voted for the moderate nominee, George H. W. Bush. Division in the party was evident too at the 1996 convention, at which more moderate party members such as California governor Pete Wilson and Massachusetts Governor William Weld unsuccessfully sought to remove the Human Life Amendment plank from the party platform.

The 1996 convention at the San Diego Convention Center remains the last Republican Convention to be held in a convention center complex; all others since then have been held at sports stadiums or arenas.

After a hiatus of 80 years, the Republican Party chose Cleveland, Ohio as the site for its 2016 Presidential Nominating Convention. The convention will be held in Quicken Loans Arena, home of Lebron James and the Cleveland Cavaliers. There may have been political reasons for the selection, as no Republican has won the presidency without winning Ohio since Abraham Lincoln in 1860. Cleveland's home county, Cuyahoga, has voted 19 times for Republicans and 21 times for the Democratic candidate since 1856. However, the Democrats have carried the county for the past 40 years. [6]

Since the riots at the 1968 Democratic and 1972 Republican conventions, political advocates outside of the major parties have complained that both the Democratic and Republican conventions have violated their First Amendment rights to demonstrate, protest and advocate their ideas.[7] Both conventions have restricted protesters to demonstrating in "free speech zones" of fenced-in areas, sometimes surrounded by barbed wire, and not accessible to the delegates. Civil rights lawyers have complained that police indiscriminately arrest demonstrators and charge them with crimes even though they are not breaking the law. In New York 2004, police arrested people and testified under oath that the arrestees had been committing violent acts. Videotapes by bystanders and the New York City police themselves later contradicted that testimony, and showed that at least some arrestees had not been violent.[8] Although this proved that the police officers in question had committed perjury, they were not charged with the crime. The City has settled lawsuits for false arrest. In 2008, St. Paul required the RNC to buy liability insurance to cover the police for legal fees and judgments arising from legal complaints by protesters.[9] Currently, protest groups organizing against the 2012 RNC, such as resistRNC, believe special security event ordinances escalate and even create the violence it claims to prevent.[10]