The Republican Party controls 5 of the 7 statewide offices in Iowa and holds a majority in the Iowa House of Representatives. Republicans also hold both of the state's U.S. Senate seats and three of its four U.S. House seats.

The Republican Party of Iowa's State Central Committee also consists of several executive officers including: Chairman, Co-Chairman, State Finance Chair, and State Co-Finance Chair. These executive members do not need to be seated members of the state central committee. These members also do not have a vote on standard proceedings. The State Chairman may vote only in the case of a tie or to create a tie during a meeting which he is presiding over.[2]

Each county in Iowa may form a County Central Committee. These committees include two members elected by each precinct in the county, though additional members may be elected based on the number of votes for Republican candidates in the previous general election from each precinct. Additionally, the county central committee elects a: Chairman, Co-Chairman, Treasurer, and Secretary from either seated members of the county central committee or from Republicans within the county.[2]

The Republican Party of Iowa also develops an in-depth platform about what the state party stands for. In general this statement is a general document cementing the principle of the Republican Party while leaving some issues up to individual party voters.[3] 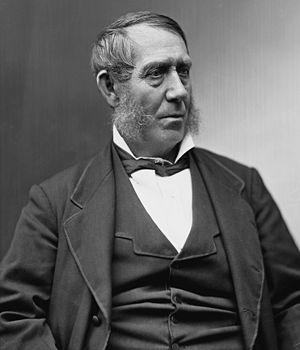 The RPI was founded on an anti-slavery platform in 1856 by citizens dissatisfied with the existing Whig and Democratic Parties. Samuel J. Kirkwood, abolitionist and later Iowa's Civil War governor, is credited as one of the principal founders. Summoned from his mill at Coralville and still coated in flour dust, Kirkwood gave a rousing speech at the founding meeting of the Republican Party of Iowa in February 1856 in Iowa City. Many people credited Kirkwood's speech and subsequent work with the success of the party in Iowa. Another principal founder was Edward Russell, an outspoken abolitionist editor who later turned the Davenport Gazette into an award-winning Republican newspaper and one of the largest dailies in Iowa.[4] At the Republican State Convention in 1865, Russell introduced the resolution declaring negro suffrage in Iowa and carried it by a decisive majority.[5] His more famous son, Charles Edward Russell, went on to found the National Association for the Advancement of Colored People (NAACP).[6]

Pro-Union sentiment during and after the Civil War helped the party to expand in importance. Between 1858 and 1932 the Republicans won every Iowa gubernatorial election, with the exception of 1890, when Horace Boies, a former Republican, was elected because of his opposition to Prohibition. In 1932 electoral frustration with the Great Depression and Prohibition led to the re-emergence of the Democratic Party in Iowa. Historically the party has held the Governor's office – 30 of Iowa's 41 governors have been Republicans.

Since 1979, he RPI has held a straw poll in Iowa in the each year preceding a presidential election, except when there is a Republican incumbent. This straw poll is separate from the Republican caucuses. The straw poll includes a dinner, multiple speeches by candidates, and a variety of booths set up by various candidates and causes, in addition to an actual straw poll of participants' presidential preferences.

The Iowa Caucuses are the kickoff for the national presidential selection process. Iowa holds a powerful position in that process because it can serve as a sounding board for the strength of a candidate's campaign. A win in the Iowa Caucuses can validate a candidate or propel them from relative obscurity. In particular the Iowa Republican Caucuses holds the most power when the GOP is either not the party in the Presidency or when an incumbent is not on the ballot. As Iowa is the first state to cast its votes on the nominee the media often focuses heavily on opinion polls from the state to determine which way GOP voters are leaning.

In 2008 former Arkansas Governor Mike Huckabee grew in name recognition because of his Iowa victory and grew his national profile. In 2000 with a potentially heated nomination fight between then Texas Governor George W. Bush and Arizona Senator John McCain; Bush who carried the state with 41% of the vote set the tone for his campaign set up a successful run for the Republican Nomination and the Presidency.[7]

During the 2012 Republican primaries the Republican Party of Iowa partnered with various news organizations such as Fox News to bring a series of debates that were nationally televised, but directed toward voters in Iowa. This national attention is a potential political boon for a small midwestern state and attracts attention politically to a state that may otherwise not receive such attention. The Iowa Caucuses also give power to the party members in the electorate. In this the average GOP voter in Iowa can set the tone for the entire primary campaign. This gives local voters tremendous control over who the next President will be.

The role played by the Iowa Caucuses is viewed with envy by states across the country. Traditionally, Iowa has been first and then followed by the state of New Hampshire, but states such as South Carolina, Nevada, and Florida have been moving up the dates of their presidential primaries to try and capture some of the media and political attention that Iowa and New Hampshire receive.[8]