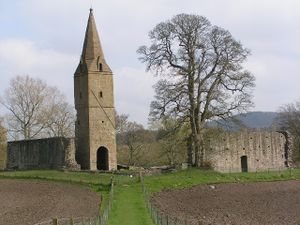 Restenneth Priory was a monastic house of Augustinian canons founded by Jedburgh Abbey, with the patronage of King Malcolm IV of Scotland, in 1153. Although there is little literary evidence, archaeological evidence strongly indicates that there was a monastery at Restenneth from very early times. There is also speculation that Restenneth may even have been the Pictish church dedicated to St Peter (mentioned in Bede) built in 710 for Nechtán mac Der Ilei, King of the Picts.

Augustinian Restenneth was always a small priory and very dependent on its mother-house at Jedburgh. In 1501 there were only two canons and an annual income of £120 (compare Arbroath Abbey, which had £10,924 in 1561). There was an attempt to incorporate it into the Royal Chapel in this year, but this failed to occur, and King James IV of Scotland suggested its incorporation into the archbishopric of St Andrews. This too evidently did not occur, as priors continue to be on record. The priory was, however, turned into a secular lordship for Thomas Erskine, Viscount Fentoun, in 1606.

All except the tower is now in ruins.

For the tourist, Restenneth Priory is just outside the medium-sized town of Forfar. It shares an access road with the Angus Archives. There is a short path from the closest parking area to the priory. While at the priory, the town and the roads nearby are not visible, so the fields and the medieval (or maybe earlier) architecture are the only things to be seen.