Reston virus (RESTV) is one of five known viruses within the genus Ebolavirus. Reston virus causes Ebola virus disease in non-human primates; unlike the other four ebolaviruses, it is not known to cause disease in humans, but has caused asymptomatic infections.[1][2][3] Reston virus was first described in 1990 as a new "strain" of Ebola virus (EBOV).[4] It is the single member of the species Reston ebolavirus, which is included into the genus Ebolavirus, family Filoviridae, order Mononegavirales.[5] Reston virus is named after Reston, Virginia, US, where the virus was first discovered.

RESTV was discovered in crab-eating macaques from Hazleton Laboratories (now Covance) in 1989. This attracted significant media attention due to the proximity of Reston to the Washington, DC, metro area and the lethality of a closely related Ebola virus. Despite its status as a level-4 organism, Reston virus is non-pathogenic to humans, though hazardous to monkeys;[6][7] the perception of its lethality was compounded by the monkey's coinfection with Simian hemorrhagic fever virus (SHFV).[8]

Reston virus is pronounced ‘rɛstən vɑɪrəs (IPA) or res-tuhn vahy-ruhs in English phonetic notation.[5] According to the rules for taxon naming established by the International Committee on Taxonomy of Viruses (ICTV), the name Reston virus is always to be capitalized, but is never italicized, and may be abbreviated (with RESTV being the official abbreviation).

While investigating an outbreak of Simian hemorrhagic fever (SHFV) in November 1989, an electron microscopist from USAMRIID named Thomas W. Geisbert discovered filoviruses similar in appearance to Ebola virus in tissue samples taken from crab-eating macaque imported from the Philippines to Hazleton Laboratories in Reston, Virginia. The filovirus was further isolated by Dr. Peter B. Jahrling, and over the period of three months over a third of the monkeys died—at a rate of two or three a day.[13]

Blood samples were taken from 178 animal handlers during the incident.[14] Of them, six eventually seroconverted, testing positive using ELISA. They remained, however, asymptomatic. In January 1990, an animal handler at Hazelton cut himself while performing a necropsy on the liver of an infected Cynomolgus. Under the direction of the Center for Disease Control and Prevention (CDC) the animal handler was placed under surveillance for the duration of the incubation period. When the animal handler failed to become ill, it was concluded that the virus had a low pathogenicity in humans.[15] 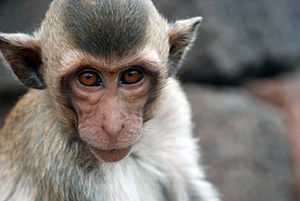 Cynomolgus, or crab-eating macaques, imported from the Philippines, were found to be carrying the filovirus.

Following the discovery of a filovirus in crab-eating macaques, an investigation tracing the infection was conducted by the CDC. The monkeys were imported from the Philippines, which had no previous record of SHFV or ebolavirus infections. It was suspected that the monkeys contracted both diseases while in transit aboard KLM airlines before reaching Reston. Shipments were tracked to New York City, Texas, and Mexico City, none of which produced cases of infection.[16]

By January 1990, Hazelton Laboratories recovered from its previous losses and began importing monkeys again from the same establishment in Manila that had provided the original animals. The imported monkeys became infected and were euthanized.[14] In early February the CDC received reports of the disease in Alice, Texas. In March the Division of Quarantine at the CDC secured a temporary ban on the importation of monkeys into the United States from anywhere in the world.[17]

Following the announcement of the filovirus disease outbreak in Reston, Virginia, a serosurvey was conducted to assess the prevalence of the infection. Of the several hundred serums received by the CDC, approximately ten percent showed some reaction to ebolavirus antigen—though usually at low levels. Counterintuitively, the majority of the monkeys found positive were from Indonesia.[18]

In May 1990 an investigation led by Susan Fisher-Hoch, Steve Ostroff, and Jerry Jennings was sent to Indonesia. During the investigation, it was hypothesized that there could be a cross infection since monkeys suspected of illness were typically placed in gang cages containing up to twenty to thirty other monkeys suspected of illness. Upon arrival they were told that most of the monkeys were imported from the island of Sumatra. The investigation team found no trace of the virus in either case.[19]

Following the investigation in Indonesia, an experiment was conducted in the level-4 lab at the CDC campus in DeKalb County, Georgia with thirty-two monkeys: sixteen green monkeys (Cercopithecus aethiops) and sixteen crab-eating macaques. Half of the sixteen green monkeys and crab-eating macaques were infected with Reston virus and the other half with Ebola virus. Ebola virus infection was lethal to nearly all monkeys. However, most of the monkeys infected with Reston virus recovered in a month. The surviving monkeys were kept for two years to detect any trace of the virus - none was found. However, the monkeys continued to possess a high level of antibody.[8]

Following the test at the CDC campus in DeKalb County, two of the monkeys who had survived Reston virus infection were infected with a very large dose of the Ebola virus in an effort to produce an Ebola vaccine. One of the two monkeys remained resistant; the second died.[8]

The physical building in which the outbreak occurred was demolished on 30 May 1995 and a new building constructed in its place. This facility, which is part of the Isaac Newton Square office park, at 1946 Isaac Newton Sq W, became a PALS Early Learning and Child Care Center, then became a Mulberry Child Care and preschool center as of 2007, and as of 2009 it became a KinderCare.[20]