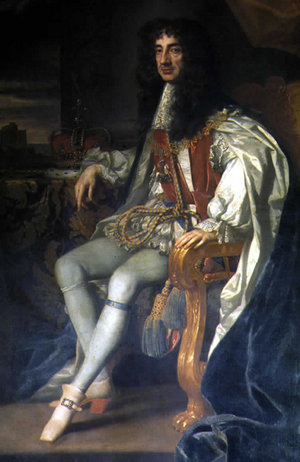 King Charles II, the first monarch to rule after the English Restoration.

The Restoration was both a series of events in April–May 1660 and the period that followed it in British history. In 1660 the monarchy was restored to the kingdoms of England, Ireland and Scotland in the person of Charles II. The period that followed the Wars of the Three Kingdoms was officially declared an Interregnum.

On 4 April 1660, Charles II issued the Declaration of Breda, in which he made several promises in relation to the reclamation of the crown of England. Monck organized the Convention Parliament, which met for the first time on 25 April. On 8 May it proclaimed that King Charles II had been the lawful monarch since the execution of Charles I on 30 January 1649.[1] "[C]onstitutionally, it was as if the last nineteen years had never happened".[2] Charles returned from exile, leaving The Hague on 23 May and landing at Dover on 25 May.[3] He entered London on 29 May, his birthday. To celebrate "his Majesty's Return to his Parliament", 29 May was made a public holiday, popularly known as Oak Apple Day.[4] He was crowned at Westminster Abbey on 23 April 1661.[3]

Coat of Arms of the Stuart Kings

"The commonwealth parliamentary union was, after 1660, treated as null and void".[5] As in England the republic was deemed constitutionally never to have occurred. The Convention Parliament was dissolved by Charles II in January 1661, and he summoned his first parliament in Ireland in May 1661. In 1662, 29 May was made a public holiday.

Coote, Broghill and Sir Maurice Eustace were initially the main political figures in the Restoration. George Monck, Duke of Albemarle was given the position of Lord Lieutenant of Ireland but he did not assume office. In 1662 the 1st Duke of Ormonde returned as the Lord Lieutenant of Ireland and became the predominant political figure of the Restoration period.

Charles was proclaimed King again on 14 May 1660. He was not crowned, having been previously crowned at Scone in 1651. The Restoration "presented an occasion of universal celebration and rejoicing throughout Scotland".[6]

Charles II summoned his parliament on 1 January 1661, which began to undo all that been forced on his father Charles I of Scotland. The Rescissory Act 1661 made all legislation back to 1633 'void and null'.[7]

Barbados, as a haven for refugees fleeing the English republic, had held for Charles II under Lord Willoughby until defeated by George Ayscue. When news reached Barbados of the King's restoration, Thomas Modyford declared Barbados for the King in July 1660.[8] The planters, however, were not eager for the return of the former governor Lord Willoughby, fearing disputes over titles, but the King ordered he be restored.[9]

Jamaica had been a conquest of Oliver Cromwell's and Charles II's claim to the island was therefore questionable. However, Charles II chose not to restore Jamaica to Spain and in 1661 it became a British colony and the planters would claim that they held rights as Englishmen by the King's assumption of the dominion of Jamaica.[10] The first governor was Lord Windsor. He was replaced in 1664 by Thomas Modyford who had been ousted from Barbados.

New England, with its Puritan settlement, had supported the Commonwealth and the Protectorate. Acceptance of the Restoration was reluctant in some quarters as it highlighted the failure of puritan reform.[11] Rhode Island declared in October 1660 and Massachusetts lastly in August 1661.[12] New Haven provided refuge for Regicides such as Edward Whalley, William Goffe and John Dixwell and would be subsequently merged into Connecticut in 1662, perhaps in punishment.[13] John Winthrop, a former governor of Connecticut, and one of whose sons had been a captain in Monck's army, went to England at the Restoration and in 1662 obtained a Royal Charter for Connecticut with New Haven annexed to it.

Maryland had resisted the republic until finally occupied by New England Puritans/Parliamentary forces after the Battle of the Severn in 1655. In 1660 the Governor Josias Fendall tried to turn Maryland into a Commonwealth of its own in what is known as Fendall's Rebellion but with the fall of the republic in England he was left without support and was replaced by Philip Calvert upon the Restoration.

Virginia was the most loyal of King Charles II's dominions. It had according to the eighteenth century historian Robert Beverley, Jr. been "the last of all the King's Dominions that submitted to the Usurpation".[14] Virginia had provided sanctuary for Cavaliers fleeing the English republic. Sir William Berkeley, who had previously been governor up until 1652, was elected governor in 1660 by the House of Burgesses and he promptly declared for the King. The Anglican Church was restored as the established church.

In 1663 the Province of Carolina was formed as a reward given to some supporters of the Restoration. The province was named after the King's father, Charles I.