Rethymno (Greek: Ρέθυμνο, [ˈreθimno], also Rethimno, Rethymnon, Réthymnon, and Rhíthymnos) is a city of approximately 40,000 people in Greece, the capital of Rethymno regional unit on the island of Crete. It was built in antiquity (ancient Rhithymna and Arsinoe), but was never a competitive Minoan centre. It was, however, strong enough to mint its own coins and maintain urban growth. One of these coins is today depicted as the crest of the town with two dolphins in a circle. 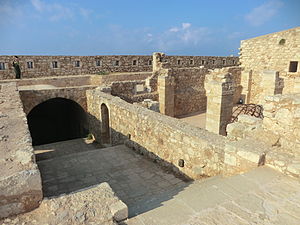 Inside the Fortezza of Rethymno. 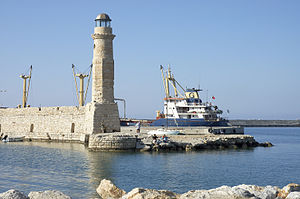 This region as a whole is rich with ancient history, most notably through the Minoan civilisation centred at Kydonia east of Rethymno.[2] Rethymno itself began a period of growth when the Venetian conquerors of the island decided to put an intermediate commercial station between Heraklion and Chania, acquiring its own bishop and nobility in the process. Today's old town (palia poli) is almost entirely built by the Venetians. It is one of the best preserved old towns in Crete.

The town still maintains its old aristocratic appearance, with its buildings dating from the 16th century, arched doorways, stone staircases, Byzantine and Hellenic-Roman remains, the small Venetian harbour and narrow streets. The Venetian Loggia houses the information office of the Ministry of Culture. A Wine Festival is held there annually at the beginning of July. Another festival, in memory of the destruction of the Arkadi Monastery, is held on 7–8 November.

The city's Venetian-era citadel, the Fortezza, is one of the best-preserved castles in Crete. Other monuments include the Neratze mosque (the Municipal Odeon arts centre), the Great Gate (Μεγάλη Πόρτα, Porta Guora), the Piazza Rimondi (Rimondi square) and the Venetian Loggia.

The town was captured by the Ottoman Empire in 1646 and was ruled by it for almost three centuries. The town (Resmo in Turkish) was the centre of a sanjak during Ottoman rule.

During the Battle of Crete (20–30 May 1941), the Battle of Rethymno was fought between German paratroopers and Australian and Greek forces. Although initially unsuccessful, the Germans won the battle after receiving reinforcements from Maleme in the Northwestern part of the island

Today the city's main income is from tourism, many new facilities having been built in the past 20 years. Agriculture is also notable, especially for olive oil and other Mediterranean products. 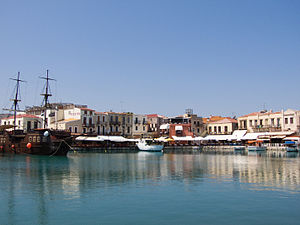 View of the old harbour. 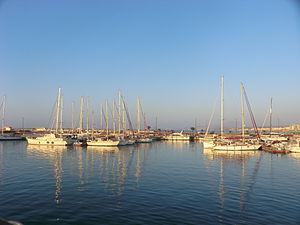 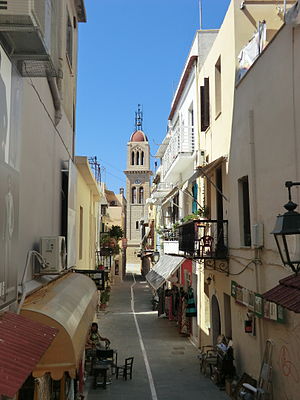 Street and the belltower of Megalos Antonios church in the fond 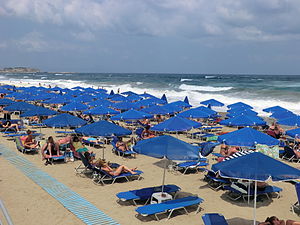 The municipality Rethymno was formed at the 2011 local government reform by the merger of the following 4 former municipalities, that became municipal units:[3]

Rethymno is home to the following museums:

Pandelis Prevelakis wrote Το χρονικό μιας πολιτείας (1937), The Chronicle of my Town, a nostalgic depiction of Rethymno from the period of the Cretan State (1898) to the expulsion of the Cretan Turks (1924).

Rethymno is twinned with: