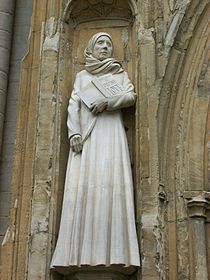 Statue of Julian of Norwich, holding the book, Revelations of Divine Love, at Norwich Cathedral.

The Revelations of Divine Love (which also bears the title A Revelation of Love — in Sixteen Shewings above the first chapter) is a 14th-century book of Christian mystical devotions written by Julian of Norwich. It includes her sixteen mystical visions and contemplations on universal love and hope in a time of plague, religious schism, uprisings and war. Published in 1395, it is the first published book in the English language to be written by a woman.[1]

At the age of thirty, 13 May 1373, Julian was struck with a serious illness. As she prayed and prepared for death, she received a series of sixteen visions on the Passion of Christ and the Virgin Mary. Saved from the brink of death, Julian of Norwich dedicated her life to solitary prayer and the contemplation of the visions she had received. She wrote a short account of her visions probably soon after the event. About twenty or thirty years after her illness, near the end of the fourteenth century, she wrote down her visions and her understanding of them. Whereas Latin was the language of religion in her day, Julian of Norwich wrote in a straightforward Middle English, perhaps because she had no other medium in which to express herself (she describes herself as a simple creature unlettered, Rev. chap. 2).[2]

Although Julian refers to herself as a simple creature unlettered (Rev. chap. 2), it is possible that she was educated and that "unlettered" carries a more nuanced meaning. It might be an expression of real modesty or imposed modesty because she did not want to antagonize her readers, especially male readers in the ecclesiastical hierarchy, who would have been offended if she considered herself a teacher. Also, "unlettered" in the Middle Ages did not necessarily mean the inability to read or write. It might have just meant that she did not receive a formal education because, in the Middle Ages, formal education was rarely available to laywomen. Another interpretation of "unlettered" could be that Julian was illiterate in Latin, the official ecclesial and academic language of her time and place. That being said, it is possible that she had received some instruction and that she could read and write.[3]:15–6 Throughout the mid-fourteenth century, Norwich was a flourishing centre for religious life. The city contained many convents and orders that recognized the importance of education. Many English convents in the Middle Ages had boarding schools for girls where they were expected to read and write.[3]:16 While scholars are not sure whether Julian attended any of those boarding schools, it is at least a possibility. There were many schools in the late Middle Ages for young men to attend. The goal of these schools was to give men the basic training needed before entering colleges. Some of these schools were attached to a church or cathedral. Those schools taught reading, writing, religion, spoken and written Latin, and probably rhetoric and logic. It is a possibility that Julian had a brother who went to such a school, and she could have learned from her brother.[3]:15–7 All these possibilities show that there were a number of religious resources which could have given Julian some kind of education. When Julian describes herself as "unlettered" she may have just meant that she lacked a "formal education."

The Revelations is divided into eighty-six chapters. These chapters are gathered into larger sections as follows:

The first chapter begins with a single sentence introduction: This is a Revelation of Love that Jesus Christ, our endless bliss, made in Sixteen Shewings, or Revelations particular. This is followed by a sentence or two describing each of the sixteen visions in turn. The second chapter is partly autobiographical. Julian mentions her illness, but in a spiritual manner. She reflects on three 'gifts' from God: meditation on the Passion of Christ, meditation on her own suffering and the gift of greater piety (which she calls 'wounds'). In the third chapter, which concludes the introduction, Julian writes more concretely about the events of her illness and her preparation for death by receiving the last rites. The introduction ends with Julian's recounting of her sudden recovery as she lay on her deathbed gazing at a shining image of the cross.

The individual revelations are as follows:

"And in þis he shewed me a lytil thyng þe quantite of a hasyl nott. lyeng in þe pawme of my hand as it had semed. and it was as rownde as eny ball. I loked þer upon wt þe eye of my vnderstondyng. and I þought what may þis be. and it was answered generally thus. It is all þat is made. I merueled howe it myght laste. for me þought it myght sodenly haue fall to nought for lytyllhed. & I was answered in my vnderstondyng. It lastyth & euer shall for god louyth it. and so hath all thyng his begynning by þe loue of god. In this lytyll thyng I sawe thre propertees. The fyrst is. þt god made it. þe secunde is þet god louyth it. & þe þrid is. þat god kepith it."

[And in this he showed me a little thing, the quantity of a hazelnut, lying in the palm of my hand, it seemed, and it was as round as any ball. I looked thereupon with the eye of my understanding, and I thought, 'What may this be?' And it was answered generally thus: 'It is all that is made.' I wondered how it could last, for I thought it might suddenly fall to nothing for little cause. And I was answered in my understanding: 'It lasts and ever shall, for God loves it; and so everything has its beginning by the love of God.' In this little thing I saw three properties; the first is that God made it; the second is that God loves it; and the third is that God keeps it.]

During her early life, the Black Death hit the city of Norwich three times. It is estimated that the plague killed about a third of England's population in one single epidemic. People died so quickly and in such numbers that "the dead could not receive proper burial and in the worst of times, lay stacked in carts like so much cordwood, or in hastily dug pits on the edge of town, or simply where they fell, in the streets".[4] Seeing these images may have affected Julian, who was just six years old when the plague first hit Norwich. Although she does not speak of the plague directly, her book shows a deep sensitivity to suffering and dying.[3]:8