Revolt of the papier timbré 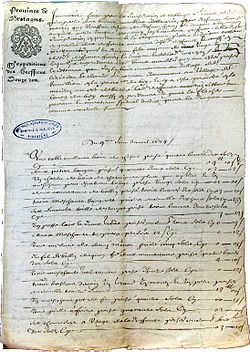 An example of one of the first acts produced on papier timbré at Quimperlé (9 April 1674, posthumous inventory edited by the jurisdiction of the abbaye de Sainte-Croix de Quimperlé)

The Revolt of the papier timbré was an anti-fiscal revolt in the west of Ancien Régime France, during the reign of Louis XIV from April to September 1675. It was fiercest in Lower Brittany, where it took on an anti-lordly tone and became known as the revolt of the Bonnets rouges (after the blue or red caps worn by the insurgents according to region) or revolt of the Torrebens (a war cry and signature in one of the peasant codes). It was unleashed by an increase in taxes, including the papier timbré, needed to authenticate official documents. (Bonnets may well refer to the ancient family descended from Henry de Bohal who are also known as Bonnet, Bot, etc. ~ see history of Pleucdeuc)

Louis XIV declared war on the Dutch Republic in 1672. Unlike in the War of Devolution, after a rapid advance the French army was stopped by the Dutch deliberately breaching the dykes and flooding the land. The war dragged on. The Dutch fleet threatened the French coast, notably the Brittany coast, off which it cruised in April–May 1673 (after a landing on Belle-Île in 1673 and another landing on Groix in 1674[1]). This interfered with Breton trade.

To finance the French war effort, new taxes were levied:

These threats and new taxes added to an already-difficult economic situation in Brittany, then a heavily populated area (with around 10% of France's population at the time) after being spared famines and epidemics since the 1640s.[2] In the 1660s and 70s it entered a phase of economic difficulties, largely linked to the first effects of Louis XIV's policy of economic warfare, the simultaneous increase in taxes and structural weaknesses:[3] for example, a 66% reduction in the wine and canvas trade after the duc de Chaulnes (nicknamed an hoc'h lart, "the fat pig", in Breton),[4] governor of Brittany[5] reduced the land revenues (fermages) and those on wine and canvas by a third, leading to general deflation, except offices.[6]

In addition, the domain congéable system, which regulated the relationship between peasant farmers and the owners of the land they cultivated, was archaic, and gave no incentive to either peasants or landowners to invest in improvements in farming methods.[7] Indeed, facing a fall in income after 1670, landlords became more punctilious in demanding their rights, which may have contributed to the uprising. This view however is disputed by Jean Meyer who noted that it is "questionable" whether there was any significant relation between the areas in which domain congéable operated and those in which the rebellion erupted.[8] It may be significant that parishes outside the congéable system rebelled, while others within it did not. It may be added that the abolition of the system is not demanded in the surviving "peasant codes".

Women played an active role in the revolt. At this time, Royal law was significantly reducing both the economic and citizenship rights that women had formerly enjoyed. Women had no right to choose their own husbands for example. This struck hard in a land where women played a very important role, and this issue is identified in the peasant codes.[9]

Finally, Brittany was a Pays d'États with its own parliaments, the Estates of Brittany and the Parliament of Brittany. It was exempted from the "gabelle" (salt tax), and new taxes should be agreed by the Estates, as guaranteed in 1532 Act of Union between Brittany and France. In 1673, the Estates had, in addition to a gift of 2.6 million livres, bought the abolition of the Chambre des domaines (which deprived some nobles of legal rights) for the same amount and acquired the royal edicts establishing new taxes, plus other expenses for the royal power, for the huge sum of 6.3 million livres.[10] A year later, the same edicts were restored, without consulting the Estates.[11] Also, through the Parliament of Brittany, Louis XIV registered tax on stamped paper in August 1673, and the tobacco tax in November 1674, in defiance of "Breton liberties", as Bretons at the time called their privileges under the Treaty of Union.[12]

The new charges involved more expense for small farmers and townspeople compared to the privileged classes,[11] and implied an introduction of gabelle. All this created a broad front of discontent against the unprecedented brutality of the central State.[13]