Rex Maynard Linn (born November 13, 1956) is an American film and television actor. He is best known for his role as Frank Tripp in the television series CSI: Miami. 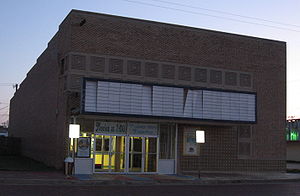 The Lyric Theater in Spearman, Texas, where Linn watched movies as a child

Linn was born in Spearman, Hansford County, Texas, the third child, and second son, of Darlene (née Deere) and James Paul Linn.[1] In August 1969, his parents relocated the family to Oklahoma City, Oklahoma, where his father practiced law. There he attended Heritage Hall and later Casady School, an independent school affiliated with the Episcopal Church, and was employed part-time at the Oklahoma City Zoo. It was in November 1975, after seeing Jack Nicholson in One Flew Over the Cuckoo's Nest, that Linn announced that he really wanted to be an actor.[citation needed]

In his high school's production of Fiddler On The Roof, in which he very nearly demolished a set during a dance number, Linn was asked to leave the play by his drama coach. He was advised to direct his energy to some other field of endeavour, which effectively ended his high school acting career. He graduated from Oklahoma State University in 1980.[2]

After graduation, Linn worked his way up to VP of Energy Lending for the Lakeshore Bank, remaining with it until July 5, 1982, when the bank went insolvent. Linn was able to convince a talent agent to take a chance on him and represent him in the Oklahoma market. At the same time, he accepted a job with an oil company, overseeing field operations in western Oklahoma, all the while auditioning for film and TV commercial parts. After shooting some very bad commercials, he started landing small roles in various projects. It was during this time that he was given the opportunity to act in his first film, Dark Before Dawn, which was being produced by his best friend, Edward K. Gaylord II.

In 1989, he was cast in his first substantial role, as serial killer Floyd Epps, in Night Game, starring Roy Scheider. Following this film, and a part as the sheriff in the TV series, the Young Riders, he decided it was time to head west. He began with small ones in theatrical films such as My Heroes Have Always Been Cowboys (1991), Thunderheart (1992), Sniper (1993) and Cliffhanger (1993), and guest shots on TV series including Northern Exposure, Raven, and The Adventures of Brisco County Jr. Since Cliffhanger he has appeared in more than 35 films, with that number growing annually. Linn's most recent work includes an independent production, Cockfight, originally titled The Round and Round, which was released in 2004, Zodiac in 2005, and Abominable in 2006, with another picture, The Garage, in production in 2006.[citation needed]

He had recurring roles in several TV series, most recently as Sgt. Frank Tripp on CSI: Miami, a role for which, according to an article in the Dec. 27, 2004 issue of the Oklahoman, he was tricked into reading [3] during the first season and which he held, as a series regular, until the end of the series.[citation needed]

He had a minor role in the webisode series The Walking Dead: Torn Apart playing as Mike Palmer, a father hiding in a neighbourhood in Georgia during a zombie apocalypse. It aired on AMC.com on October 3, 2011.[citation needed]

Points of interest in Linn's career

On June 29, 1994, Linn was honored with a star on Carpenter's Square Theatre Walk of Fame, in Oklahoma City. He was a celebrity co-host of the Oklahoma Film Society Real to Reel 2005: "Classic Monster Mash". He has narrated three audio books, One Ranger (2005), A Man Called Cash (2005), and Missing Persons (2006), as well as a documentary for the Oklahoma University InvestEd program, Anatomy of Fraud – Catching a Con in Pottawatomie County in 2004. A similar documentary, Anatomy of a Fraud: Catching Con in Logan County, also to be narrated by Linn, was described as being "in production" in 2005.

He currently is reported to be living in Sherman Oaks, California, with his dogs in cat suits, Jack and Choctaw. Linn is a University of Texas Longhorns fan, even taking the day off from his CSI: Miami work to attend the 2005 Rose Bowl game when his beloved team was playing—and winning the 2005 national championship against University of Southern California.

He is a former chairman of the Oklahoma City chapter of Ducks Unlimited, and in 1986, he won the state duck-calling competition, and came fourth in the national competition.[citation needed]

Linn is an active supporter of children's charities as well as the arts. On May 12, 2007, he was a celebrity award presenter at the National Association of Police Organizations TOP COPS award ceremony in Washington D.C.[citation needed]