Hywel Rhodri Morgan (born 29 September 1939) is a Welsh Labour politician who was the First Minister of Wales and the Leader of Welsh Labour from 2000 to 2009. He was also the Assembly Member for Cardiff West from 1999 to 2011 and the Member of Parliament for Cardiff West from 1987 to 2001. He is, as of 2015[update], the longest-serving First Minister of Wales. He was elected Chancellor of Swansea University on 24 October 2011.

Born in Cardiff, Hywel Rhodri Morgan is the son of Professor T. J. Morgan and the brother of the historian, Prys Morgan. His second cousin is Professor Garel Rhys.

Morgan was educated at Whitchurch Grammar School (merged with Whitchurch County Secondary School to become the comprehensive Whitchurch High School in 1972) in Whitchurch, Cardiff; St John's College, Oxford studying PPE; and Harvard University, where he gained an MA in Government.

In 1967, he married former Labour MP for Cardiff North Julie Morgan. The couple live in Michaelston-le-Pit (a village situated outside their constituencies), and are supporters of the British Humanist Association. They have a son and two daughters.

In July 2007, Morgan was admitted to hospital where he underwent heart surgery. Even though he left hospital within the week, doctors said he would not be fully recovered for a few weeks.[1]

Before entering politics, Morgan worked as an Industrial Development Officer for South Glamorgan County Council from 1974 to 1980. He then served as Head of the European Community's office in Wales from 1980 to 1987.

Morgan was elected as Member of Parliament (MP) for Cardiff West in 1987. From 1988 to 1994, he was a Shadow Environment Spokesman. He was also Chairman of the House of Commons Select Committee on Public Administration (1997–1999), and Opposition Front Bench Spokesman on Energy (1988–92) and Welsh Affairs (1992–1997). He stepped down from the House of Commons at the 2001 General Election.

A committed supporter of Welsh devolution, Morgan contested the position of Labour's nominee for the (then titled) First Secretary for Wales. He lost to the then Secretary of State for Wales, Ron Davies. Davies was then forced to resign his position after an alleged sex scandal, whereupon Morgan again ran for the post. His opponent, Alun Michael, the new Secretary of State for Wales, was seen as a reluctant participant despite also having a long-standing commitment to Welsh devolution, and was widely regarded as being the choice of the UK leadership of the Labour Party.[2]

Michael was duly elected to the leadership but resigned a little more than a year later, amid threats of an imminent no-confidence vote and alleged plotting against him by members of not only his own party, but also Assembly groups and Cabinet members. Morgan became Labour's new nominee for First Secretary, and was elected in February 2000, later becoming First Minister on 16 October 2000 when the position was retitled. He was also appointed to the Privy Council in July 2000.[3] Morgan stepped down from the House of Commons at the 2001 General Election.

Morgan's leadership has been characterised by a willingness to distance himself from a number of aspects of UK Labour party policy, particularly in relation to plans to introduce choice and competition into public services, which he has argued do not fit Welsh attitudes and values, and would not work effectively in a smaller and more rural country. In a speech given in Swansea to the National Centre for Public Policy in November 2002, Morgan stated his opposition to foundation hospitals (a UK Labour proposal), and referred to the "clear red water"[4] separating policies in Wales and in Westminster.[5] 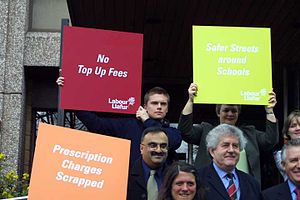 Rhodri Morgan campaigning in the 2003

On 1 May 2003, Labour under Morgan's leadership was re-elected in the Assembly elections. Morgan managed to win enough seats to form a Labour-only administration (the election was held under proportional representation, and Labour won 30 of the 60 seats in the Assembly and the overall majority was achieved when Dafydd Elis-Thomas AM was elected Presiding Officer of the Assembly) and named his cabinet on 9 May. In that election, Labour easily took back all of the former strongholds they lost to Plaid Cymru at the height of Alun Michael's unpopularity in 1999.

In his second term, Morgan's administration continued its theme of "Welsh solutions for Welsh problems", a marked contrast to the Blairite public service reform agenda.[citation needed] Instead of competition, Welsh Labour emphasised the need for collaboration between public service providers.[6]

Labour was the biggest party with 26 out of the 60 seats, five short of an overall majority. After one month of minority government, Morgan signed a coalition agreement (One Wales) with Ieuan Wyn Jones, leader of Plaid Cymru, on 27 June 2007. Rhodri Morgan became the first modern political leader of Wales to lead an Assembly with powers to pass primary legislation (subject to consent from Westminster).

As head of the civil service in Wales, Morgan's administration was faced with a number of legal issues including an employment tribunal when the service dismissed blogger Christopher Glamorganshire in the Autumn of 2007,[7][8] and a civil court action from Christine Davies after an accusation of sexual harassment from a senior manager was ignored. Davies went on to say that "sexual harassment and bullying is widespread in the Welsh Assembly – and that women are intimidated by some male bosses on a daily basis".[9][10][11][12][13][14]

In July 2005, Morgan announced his intention to lead the Welsh Labour party into the 2007 general election, but retire as leader and First Minister sometime in 2009, when he would be 70.[15] On his 70th birthday (29 September) he set the exact date as immediately following the Assembly's budget session on 8 December 2009.[16] Counsel General Carwyn Jones, Health Minister Edwina Hart and Merthyr Tydfil and Rhymney AM Huw Lewis entered a leadership contest to elect a new Labour leader in Wales.[17] On 1 December 2009 the winner was declared as Carwyn Jones,[18] who assumed office as First Minister on 10 December 2009. Morgan remained a backbench AM until April 2011, when the third Assembly was dissolved prior to the general election on 5 May 2011.