From Infogalactic: the planetary knowledge core
Jump to: navigation, search
This article is about the Danish town. For other uses, see Ribe (disambiguation).

Ribe (German: Ripen) is a Danish town in south-west Jutland and has a population of 8,168 (1 January 2014).[1] It is the seat of the Diocese of Ribe covering southwestern Jutland.

Until 1 January 2007, Ribe was the seat of both a surrounding municipality, and county. It is now part of the enlarged Esbjerg Municipality in the Region of Southern Denmark.

Ribe is the oldest extant town in Denmark, established in the early eighth century in the Germanic Iron Age.

Established in the first decade of the eighth century[2] and first attested in a document dated 854; Ribe is the oldest extant town in Denmark (and in Scandinavia). The town celebrated its 1300th anniversary in 2010.[3]

When Ansgar the Archbishop of Hamburg-Bremen, set out on the "Mission to bring Christianity to the North", he made a request in about 860, to King Horik II of Denmark, that the first Scandinavian church be built in Ribe. This was not coincidental, since Ribe already at that point was one of the most important trade cities in Scandinavia. However the presence of a bishop, and thus a cathedral, in Ribe can only be confirmed from the year 948. Recent archaeological excavations in Ribe have however led to the discovery of between 2,000 and 3,000 Christian graves. They have been dated to the ninth century indicating that a large Christian community was already living peacefully together with the Vikings at the time.[4] Excavations conducted between 2008 and 2012 have also revealed more details of the original church built by Ansgar.[5]

The town has many well-preserved old buildings, Ribe Cathedral, and about 110 houses are under Heritage Protection. Denmark's oldest town hall is found on the town's Von Støckens Plads. The building was erected in 1496, and was purchased by the city for use as a town hall in 1709.

There are numerous cultural and environmental features of Ribe. Among the cultural highlights are notable churches and museums. The flora and fauna, while depleted in large part from the man-made development and surrounding agricultural land conversion, retain notable aspects of the natural environment. The Ribe River flows through town[8] and hosts certain elements of riparian habitat. Certain notable birdlife is found in and near the town; the European white stork, Ciconia ciconia, is one of the historic inhabitants of the town, choosing to build nests atop chimneys. This bird has steadily declined in population throughout Western Europe due to agricultural land conversion as well as droughts in its wintering range in Africa.[9]

The following list some of the specific town features: 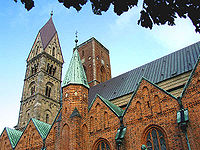 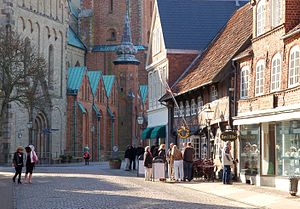 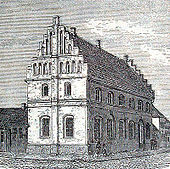 The following have been declared Honorary Citizens of Ribe: (By year)

The town of Ribe has a long history as a center of learning. The cathedral school of Ribe Katedralskole has its roots in the Latin School of Ribe, dating back to at least 1145, when the bishop officially handed over the chapter's school.[10] The school provided religious education of priests and clergymen up until 1805 and is nowadays a gymnasium (Danish high school). Ribe Katedralskole celebrated its 850th anniversary in 1995, and is the oldest continuously existing school in Scandinavia.[citation needed]

The following table shows the population of Ribe. Data from before the eighteenth century are estimates, the rest are taken from the official census.

Dancake has a factory in Ribe. 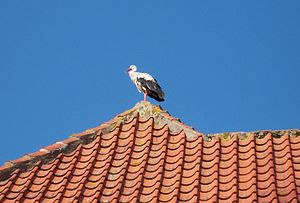