He became the first Formula One driver to achieve 200 Grand Prix starts when he appeared at the 1990 British Grand Prix, and the first to achieve 250 starts at the 1993 German Grand Prix. Patrese entered 257 Formula One World Championship Grands Prix and started 256 races making him the fourth most experienced F1 driver in history, after Rubens Barrichello, Michael Schumacher and Jenson Button. He was runner-up in the 1992 Formula One season and third in 1989 and 1991. He won six Formula One races, with a record gap of over six years between two of these – the 1983 South African Grand Prix and 1990 San Marino Grand Prix.

Patrese also competed at the World Sportscar Championship for the Lancia factory team, finishing runnerup in 1982 and collecting eight wins. 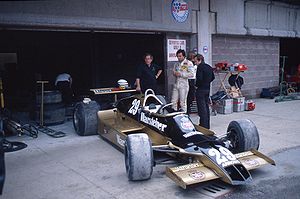 Patrese in the Arrows A1 at the 1979 Dino Ferrari Grand Prix.

He made his debut in 1977 with the Shadow racing team at the Monaco Grand Prix when the team was forced to change drivers due to Renzo Zorzi having financial problems. Later that year team-leader Jackie Oliver left Shadow to form the Arrows team, taking Patrese with him. Shadow took Arrows to court, arguing that the design of the Arrows car was so similar to their own that Arrows had stolen it. The court agreed, forcing Arrows to redesign their car, which they did in just six weeks.

In 1978 Patrese very nearly won Arrows' second race, the South African Grand Prix, until engine failure forced him to retire 15 laps from the end. Later that year, Patrese was involved in a pile-up when he came together with James Hunt and other drivers' cars at the start of the Italian Grand Prix. One of the other drivers involved was Ronnie Peterson, who, although his injuries were not in themselves life-threatening, died from an embolism the following day. An injunction was filed by the Grand Prix Driver's Association to ban Patrese from the next race, the United States Grand Prix. This went through and Patrese took no part in that Grand Prix weekend at Watkins Glen. After the crash, Hunt (along with other drivers) blamed Patrese for starting the accident, and viewers of Hunt's commentaries of Formula One races from 1980 to 1993 on BBC Television were regularly treated to bitter diatribes against Patrese when the Italian appeared on screen. Hunt believed that it was Patrese's muscling past that caused the McLaren and Lotus to touch, but Patrese successfully argued that he was already well ahead of the pair before the accident took place. Patrese, together with the official who started the race, stood trial in 1981 for Peterson's death but both were declared not guilty of any wrongdoing. 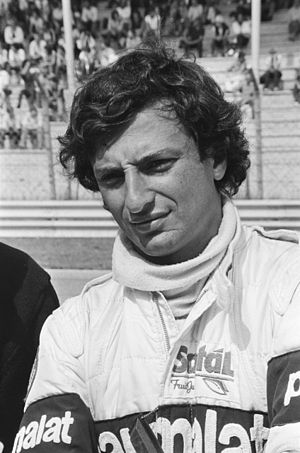 Patrese at the 1982 Dutch Grand Prix.

In 1982 Patrese moved to Brabham and gained a lucky win at that year's Monaco Grand Prix when there were five leaders. He took the lead when Alain Prost crashed out, only to spin in dampening conditions on the next lap. This left him third behind Didier Pironi and Andrea de Cesaris, who both stopped on the final lap – Pironi with an electrical fault and de Cesaris out of fuel. A second win followed in 1983 at the South African Grand Prix. He also crashed out late in the race while leading at San Marino, but in a season which saw his team-mate Nelson Piquet claim his second Drivers' Championship title, Patrese finished a distant ninth. It would be seven years before he made another visit to the top step of the podium. 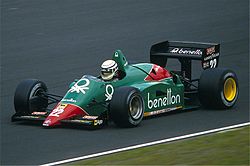 Patrese driving for Alfa Romeo in 1985.

A move to Alfa Romeo in 1984 delivered two lacklustre seasons resulting in eight world championship points and a single visit to the podium at the 1984 Italian Grand Prix. Patrese and team mate, American Eddie Cheever, were hampered by cars with Alfa Romeo 890T V8 turbo engines that proved too thirsty for the amount of fuel they were allowed to carry (220 litres). Often both drivers drove good races to be in the points, only to run out of fuel two or three laps from the finish dropping them out of the points. Indeed, Patrese's 3rd place at Monza in 1984 (to date the final podium finish for Alfa Romeo in F1) came at the expense of Cheever who was robbed of a podium finish when his car ran out of fuel 6 laps from the finish.

The pair were also hampered by their cars. 1984's Alfa Romeo 184T proved fast in qualifying, but fuel restrictions saw them well off the pace in most races. The 1985 car, the 185T proved to be even less competitive to the point that half way through the season the team replaced it with an updated version of the 184T (dubbed the 184TB). Although the updated car did prove faster, results were not forthcoming. In an interview in 2000, Patrese described the 185T as "The Worst Car I ever drove".

In 1986 Patrese returned to Brabham alongside fellow Italian Elio de Angelis, but by now the team was a spent force and would never again take a driver to victory in a grand prix. Two more winless seasons followed despite the team's BMW engine being considered at the time to be the most powerful on the grid. Despite the trials of uncompetitive machinery, Patrese never publicly criticised the team and earned respect throughout the sport for his professionalism. 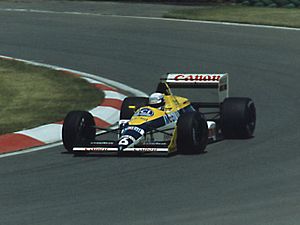 Patrese driving for Williams at the 1988 Canadian Grand Prix. 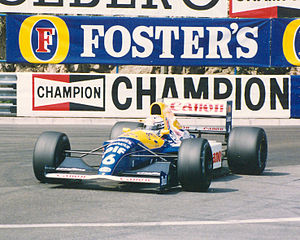 Patrese driving for Williams at the 1991 Monaco Grand Prix. 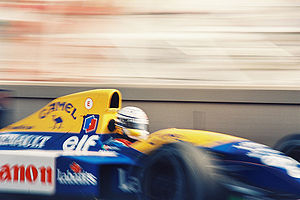 Patrese in the Williams FW14B at the Monaco Grand Prix.

Toward the end of the 1987 season, Patrese was given the chance to revitalise what seemed to be a declining career when the Williams driver Nigel Mansell was injured whilst qualifying for the Japanese Grand Prix. With the help of Brabham owner and Formula One boss Bernie Ecclestone, Patrese was drafted in to replace Mansell for the season's finale in Australia.

Patrese impressed the Williams management sufficiently to be signed by them as Nelson Piquet's replacement for the 1988 season. However, 1988 saw Williams struggling with an uncompetitive car powered by non-turbocharged Judd V8 engines. Patrese and Mansell were also hampered in the first half of the season by the Williams FW12's reactive suspension not working properly. It was not until 1989 and the arrival of the V10 Renault engines that Patrese and his new team-mate Thierry Boutsen were able to challenge for race points. Patrese achieved an impressive 3rd place in the Drivers' Championship, despite taking no wins but securing 6 podium finishes, including 4 second places, as well as claiming pole position in Hungary, a race he confidently led under constant pressure from reigning World Champion Ayrton Senna in his McLaren-Honda until lap 54 when a holed radiator forced his retirement. Patrese finally won his third Grand Prix at the 1990 San Marino Grand Prix, and finished the 1990 Drivers' Championship in seventh place.

In 1991 Nigel Mansell returned to Williams after two seasons with Ferrari and, together with Patrese, the team became genuine contenders for both the Drivers' and Constructors' Championships. Two wins in Mexico and Portugal gave Patrese his most competitive F1 season thus far and a respectable third place behind Championship contenders Mansell and Ayrton Senna. Patrese also out qualified Mansell at every race until the halfway point of the season at Silverstone for the British Grand Prix, and provided much support for the Englishman's title chase at races such as Italy and Portugal.

Williams dominated F1 in 1992 and Patrese continued to deliver in his role of second driver to Nigel Mansell, moving out of the way for Mansell while leading comfortably at that year's French Grand Prix. Again Patrese handled the delicate situation about team orders diplomatically, repeatedly offering a "No comment" to questions about the team orders that had been imposed on him at the red flag period of the French race. Patrese took a single win at the Japanese Grand Prix and had eight other podium finishes, including six second-place results.

With Alain Prost, Ayrton Senna and Nigel Mansell all desperately trying to sign for Williams, Patrese's position looked to be under threat and he signed for the Benetton team before the end of the year. His team mate for 1993 would be young German driver Michael Schumacher.

Ironically, only Prost was able to agree terms with Williams for 1993, leaving a seat free for Patrese had he remained with the team.

Patrese was invited to rejoin Williams in 1994 to fill the seat of Ayrton Senna after his fatal accident at Imola, but ultimately decided against returning to Formula One.

In the second half of 1996, Williams invited Patrese to test their latest car at Silverstone, with the Italian reportedly setting a time that would have placed him on the second row of the grid for that year's British Grand Prix.

While Williams continued to dominate F1 in 1993, Patrese found it difficult to live with his new team-mate Michael Schumacher and before the end of the season Benetton informed Patrese that he was "free to seek an alternate drive".

As most teams already had drivers signed for 1994, Patrese opted for retirement and brought what was then the longest F1 career in history to a conclusion. After this, Patrese competed in the 24 Hours of Le Mans in 1997. He drove a Nissan R390 GT1 for the Nissan factory team; the car was third fastest in qualifying but was forced to retire with gearbox problems.

In 1996, as thanks for his years of service to Williams, Patrese was invited to test the team's latest F1 car. In 2005 he returned to racing in the inaugural season of the Grand Prix Masters formula for retired F1 drivers. He finished third behind his former team-mate Nigel Mansell and Emerson Fittipaldi in the sole 2005 race at Kyalami, South Africa. His 2006 season was less successful with a 10th-place finish at Losail in Qatar and a 6th at Silverstone.

Patrese's record of 257 Grand Prix entries, set in a period when a typical F1 season was limited to 16 races, stood for 15 years, surviving the Schumacher era when Michael Schumacher retired on 250 race entries. Rubens Barrichello finally surpassed Patrese's total, recording his 258th Grand Prix entry at the 2008 Turkish Grand Prix.[5] As part of the "handover", Patrese tested a Honda RA107 at Jerez on 9 September (Barrichello was driving for Honda at the time).[6][7] Schumacher subsequently came out of retirement and became the second driver to surpass Patrese's former record.

† Driver did not finish the Grand Prix, but was classified as he completed over 90% of the race distance.