From Infogalactic: the planetary knowledge core
Jump to: navigation, search
"Richard of Cornwall" redirects here. For the philosopher, see Richard Rufus of Cornwall.

He was born 5 January 1209 at Winchester Castle, the second son of King John and Isabella of Angoulême. He was made High Sheriff of Berkshire at the age of only eight, was styled Count of Poitou from 1225 and in the same year, at the age of sixteen, his brother King Henry III gave him Cornwall as a birthday present, making him High Sheriff of Cornwall. Richard's revenues from Cornwall helped make him one of the wealthiest men in Europe. Though he campaigned on King Henry's behalf in Poitou and Brittany, and served as regent three times, relations were often strained between the brothers in the early years of Henry's reign. Richard rebelled against him three times, and had to be bought off with lavish gifts.

In 1225 Richard traded with Gervase de Tintagel, swapping the land of Merthen (originally part of the manor of Winnianton) for Tintagel Castle.[3] It has been suggested that a castle was built on the site by Richard in 1233 to establish a connection with the Arthurian legends that were associated by Geoffrey of Monmouth with the area. The castle was built in a more old-fashioned style for the time to make it appear more ancient. Richard hoped that, in this way, he could gain the Cornish people's trust, since they were suspicious of outsiders. The castle itself held no real strategic value.[citation needed]

The dating to the period of Richard has superseded Ralegh Radford's interpretation which attributed the earliest elements of the castle to Earl Reginald de Dunstanville and later elements to Earl Richard.[4] Sidney Toy, however, has suggested an earlier period of construction for teh castle.[5]

In March 1231 he married Isabel Marshal, the wealthy widow of the Earl of Gloucester, much to the displeasure of his brother King Henry, who feared the Marshal family because they were rich, influential, and often opposed to him. Richard became stepfather to Isabel's six children from her first husband. In that same year he acquired his main residence, Wallingford Castle in Berkshire (now Oxfordshire), and spent much money on developing it. He had other favoured properties at Marlow and Cippenham in Buckinghamshire. Isabel and Richard had four children, of whom only their son, Henry of Almain, survived to adulthood. Richard opposed Simon de Montfort, and rose in rebellion in 1238 to protest against the marriage of his sister, Eleanor, to Simon. Once again he was placated with rich gifts. When Isabel was on her deathbed in 1240, she asked to be buried next to her first husband at Tewkesbury, but Richard had her interred at Beaulieu Abbey instead. As a pious gesture, however, he sent her heart to Tewkesbury.

Left: 21st-century version of the arms of Richard of Cornwall: Argent, a lion rampant gules crowned or a bordure sable bezantée; centre: as shown on his seal, verso; right as drawn by his contemporary Matthew Paris (d.1259)[6]

Later that year Richard departed for the Holy Land. He fought no battles but managed to negotiate for the release of prisoners and the burials of Crusaders killed at a battle in Gaza in 1239. He also refortified Ascalon, which had been demolished by Saladin. On his return from the Holy Land, Richard visited his sister Isabella, the empress of Frederick II.

After the birth of Prince Edward in 1239, provisions were made in case of the king's death, which favoured the Queen and her Savoyard relatives and excluded Richard. To keep him from becoming discontented King Henry and Queen Eleanor brought up the idea of a marriage with Eleanor's sister Sanchia shortly after his return on 28 January 1242.[citation needed] On his journey to the Holy Land, Richard had met her in Provence, where he was warmly welcomed by her father Raymond Berenger IV and had fallen in love with this beautiful girl.[7] Richard and Sanchia (whom the English called Cynthia) married at Westminster in November 1243.

This marriage tied him closely to the royal party. Eleanor and Sanchia's youngest sister Beatrice would marry Charles I of Naples, while their oldest sister Margaret had married Louis IX of France. The marriages of the kings of France and England, and their two brothers to the four sisters from Provence improved the relationship between the two countries, which led up to the Treaty of Paris.[8]

Richard was appointed count of Poitou some time before August 1225.[9] However, Richard's claims to Gascony and Poitou were never more than nominal, and in 1241 King Louis IX of France invested his own brother Alphonse with Poitou. Moreover, Richard and Henry's mother, Isabella of Angoulême, claimed to have been insulted by the French queen. They were encouraged to recover Poitou by their stepfather, Hugh X of Lusignan, but the expedition turned into a military fiasco after Lusignan betrayed them.[10] Richard conceded Poitou around December 1243.[9]

The pope offered Richard the crown of Sicily, but according to Matthew Paris he responded to the extortionate price by saying, "You might as well say, 'I make you a present of the moon – step up to the sky and take it down.'"[11] Instead, his brother King Henry purchased the kingdom for his own son Edmund. 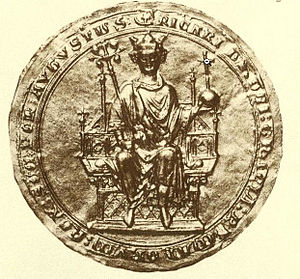 Seal of Richard, Earl of Cornwall, showing him enthroned as King of the Romans. Seal inscribed: RICARDUS DEI GRATIA ROMANORUM REX SEMPER AUGUSTUS. ("Richard by the grace of God King of the Romans ever august")

Although Richard was elected in 1256 as King of Germany by four of the seven German Electoral Princes (Cologne, Mainz, the Palatinate and Bohemia), his candidacy was opposed by Alfonso X of Castile who was elected by Saxony, Brandenburg and Trier. The pope and king Louis IX of France favoured Alfonso, but both were ultimately convinced by the powerful relatives of Richard's sister-in-law, Eleanor of Provence, to support Richard. Ottokar II of Bohemia, who at first voted for Richard but later elected Alfonso, eventually agreed to support the earl of Cornwall, thus establishing the required simple majority. So Richard had to bribe only four of them, but this came at a huge cost of 28,000 marks. On 27 May 1257 the archbishop of Cologne himself crowned Richard "King of the Romans" in Aachen;[12] however, like his lordships in Gascony and Poitou, his title never held much significance, and he made only four brief visits to Germany between 1257 and 1269. 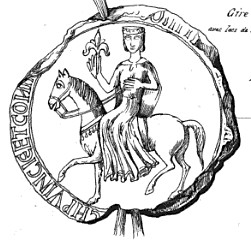 Seal of Sanchia, Queen of the Romans, Richard's wife

He founded Burnham Abbey in Buckinghamshire in 1263, and the Grashaus, Aachen in 1266.

He joined King Henry in fighting against Simon de Montfort's rebels in the Second Barons' War (1264–67). After the shattering royalist defeat at the Battle of Lewes, Richard took refuge in a windmill, was discovered, and was imprisoned until September 1265.

In December 1271, he had a stroke. His right side was paralysed and he lost the ability to speak. On 2 April 1272, Richard died at Berkhamsted Castle in Hertfordshire. He was buried next to his second wife Sanchia of Provence and Henry of Almain, his son by his first wife, at Hailes Abbey, which he had founded.

After his death, a power struggle ensued in Germany, which only ended in 1273 with the emergence of a new Roman King, Rudolph I of Habsburg, the first scion of a long-lasting noble family to rule the empire. In Cornwall, Richard was succeeded by Edmund, son of his second wife Sanchia.

He married his first wife Isabel Marshal, on 30 March 1231 at Fawley, Buckinghamshire. Her parents were William Marshal, 1st Earl of Pembroke and Isabel FitzGilbert, widow of Gilbert de Clare, 5th Earl of Gloucester.

On 17 January 1240, Isabel died giving birth at Berkhamsted Castle. She was buried at Beaulieu Abbey.

Richard and Isabel had three sons and a daughter:[13]

Sanchia of Provence (c.1225 – 9 Nov 1261) became Richard's second wife. Their wedding took place at Westminster Abbey on 23 November 1243. Her parents were Raymond, Count of Provence and Beatrice of Savoy. Richard and Sancha had two sons:[14]

Beatrice of Falkenburg was Richard's third wife. They married on 16 June 1269 at Kaiserslautern, but had no children.[15] Beatrice's father was Dietrich I, Count of Falkenburg. She was about sixteen years old when she married, and was said to be one of the most beautiful women of her time.[citation needed] Beatrice died 17 October 1277, and was buried before the high altar at the Church of the Grey Friars in Oxford.[15]

13th-century depiction of Beatrice of Falkenburg, Richard's widow, shown as queen of the Romans

Richard had a mistress named, Joan. Her origins are unknown,[16] but she was married to Ralph de Valletort (d. 1267),[17] feudal baron of Harberton, Devon[18] and feudal baron of Trematon, Cornwall; and later Sir Alexander Okeston of Modbury, Devon.[19]

With the Earl of Cornwall, Joan de Valletort had three sons, and two daughters:[20]