Cody was born in Montpelier, Vermont, on August 2, 1950. He was commissioned a Second Lieutenant upon graduation in 1972 from the United States Military Academy. His military education includes completion of the Transportation Corps Officer Basic and Advanced Courses; the Aviation Maintenance Officer Course; the AH-1, AH-64, AH-64D, UH-60, and MH-60K Aircraft Qualification Courses; the Command and General Staff College, and the United States Army War College. Cody is a Master Aviator with over 5,000 hours of flight time, and is an Air Assault School graduate.[1] 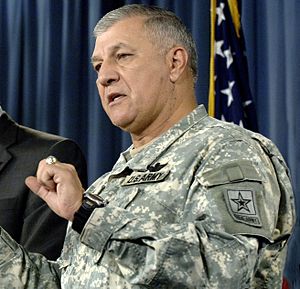 General Cody at a press conference in 2007.

Cody joined L-3 Communications in 2008. He is currently a Senior Vice President of L-3 Communications over Washington Operations.[5] In 2013, he was appointed to the Board of Trustees of New York Institute of Technology in Old Westbury, N.Y.[6]

General Cody serves as the Chairman of the Board for Homes For Our Troops, a 4 Star related 501c3 organization that builds mortgage free, specially adapted custom homes for our severely wounded veterans of the Iraq and Afghanistan wars. General Cody is a Trustee on the Board of the Intrepid Fallen Heroes Fund, a 4 Star rated 501c3 that has built and gifted back to the military the Center For the Intrepid Amputee Research and Treatment center at Brooke Army Medical Center, the National Intrepid Center For Excellence (NICOE) PTSD/mTBI research and treatment center at the Walter Reed National Military Medical Center and 3 of the planned 8 Intrepid Spirit satellite centers to the NICOE. He is also on the Advisory Council of Hope For The Warriors, a national non-profit dedicated to provide a full cycle of non-medical care to combat wounded service members, their families, and families of the fallen from each military branch.[7]

Cody is married to Vicki Lyn Heavner. They will celebrate their 39th Anniversary this year. They have two sons, Clint and Tyler who are active duty Army Officers and Apache helicopter pilots. Vicki has written a book about military life for military families. The military's largest Child Development Center (CDC) is named after the Codys. It is called the Cody Child Development Center, which is located on Fort Myer, Virginia.[8]