Sir Richard Arkwright (23 December 1732 in Preston, - 3 August 1792 in Cromford) was an inventor and a leading entrepreneur during the early Industrial Revolution. Although the patents were eventually overturned, he is credited with inventing the spinning frame, which, following the transition to water power, was renamed the water frame. He also patented a rotary carding engine that transformed raw cotton into cotton lap.

Arkwright's achievement was to combine power, machinery, semi-skilled labour and the new raw material (cotton) to create mass-produced yarn. His skills of organization made him, more than anyone else, the creator of the modern factory system, especially in his mill at Cromford, Derbyshire. Later in his life Arkwright was known as 'the Father of the Industrial Revolution'. 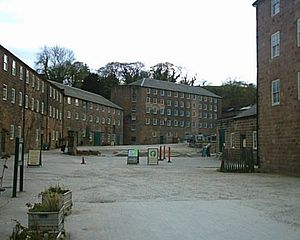 Richard Arkwright, the youngest of 7 surviving children, was born in Preston, Lancashire, England on 23 December 1732. His father, Thomas, was a tailor and a Preston Guild burgess. The family is recorded in the Preston Guild Rolls now held by Lancashire Record Office. Richard's parents, Sarah and Thomas, could not afford to send him to school and instead arranged for him to be taught to read and write by his cousin Ellen. Richard was apprenticed to a Mr Nicholson, a barber at nearby Kirkham, and began his working life as a barber and wig-maker, setting up a shop at Churchgate in Bolton in the early 1750s.[2] It was here that he invented a waterproof dye for use on the fashionable 'periwigs' (wigs) of the time, the income from which later facilitated his financing of prototype cotton machinery.

Arkwright married his first wife, Patience Holt, in 1755. They had a son, Richard Arkwright Junior, who was born the same year. In 1756, Patience died of unspecified causes. Arkwright later married Margaret Biggins in 1761 at the age of 29 years. They had three children, of whom only Susanna survived to adulthood. It was only after the death of his first wife that he became an entrepreneur.

On his own interest in spinning and carding machinery that turned raw cotton into thread. In 1768, he and John Kay, a clockmaker,[3] briefly returned to Preston renting rooms in a house on Stoneygate, now known as Arkwright House, where they worked on a spinning machine. In 1769 Arkwright patented the spinning frame, which became known as the water-frame, a machine that produced a strong twist for warps, substituting wooden and metal cylinders for human fingers. This made possible inexpensive cotton-spinning.

Lewis Paul had invented a machine for carding in 1748. Richard Arkwright made improvements to this machine and in 1775 took out a patent for a new carding engine, which converted raw cotton buds into a continuous skein of cotton fibres which could then be spun into yarn. Arkwright and John Smalley set up a small horse-driven factory at Nottingham. Needing more capital to expand, Arkwright partnered with Jedediah Strutt and Samuel Need, wealthy hosiery manufacturers, who were nonconformists. In 1771, the partners built the world's first water-powered mill at Cromford, employing 200 people mainly women and children. Arkwright spent £12,000 perfecting his machine, which contained the "crank and comb" for removing the cotton web from carding engines. He had mechanised all the preparatory and spinning processes, and he began to establish water-powered cotton mills even as far away as Scotland. His success encouraged many others to copy him, so he had great difficulty in enforcing the patent he was granted in 1775. His spinning frame was a significant technical advance over the spinning jenny of James Hargreaves, in that very little training was required of his operatives, and it produced a strong yarn suitable for the warp of the cloth. Samuel Crompton was later to combine the two to form the spinning mule.[citation needed]

In 1776 Arkwright built a second, larger mill at Cromford and, soon after, mills at Bakewell and Wirksworth. He was invited to Scotland where he helped David Dale establish the cotton mills at New Lanark. A large new mill at Birkacre, Lancashire, was destroyed, however, in the anti-machinery riots in 1779. Arkwright in 1775 obtained for a grand patent[4] covering many processes that he hoped would give him monopoly power over the fast-growing industry, but Lancashire opinion was bitterly hostile to exclusive patents; in 1781 Arkwright tried and failed to uphold his monopolistic 1775 patent. The case dragged on in court for years but was finally settled against him in 1785, on the grounds that his specifications were deficient and that he had borrowed his ideas from Leigh reed-maker Thomas Highs. The story is that clock-maker Kay, who had been commissioned by Highs to make a working metal model of Highs's invention, had given the design to Arkwright, who formed a partnership with him.[citation needed] It was also said that he was an arrogant man.[citation needed]

Arkwright moved to Nottingham, formed a partnership with local businessmen Jedediah Strutt and Samuel Need, and set up a mill powered by horses. But in 1771, he converted to water power and built a new mill in the Derbyshire village of Cromford.

It soon became apparent that the small town would not be able to provide enough workers for his mill. So Arkwright built a large number of cottages near the mill and imported workers from outside the area. He also built the Greyhound public house which still stands in Cromford market square. In 1776 he purchased lands in Cromford,[5] and in 1788 lands in Willersley, the vendor on both occasions being Peter Nightingale, the great-uncle of Florence Nightingale.

Arkwright encouraged weavers with large families to move to Cromford. Whole families were employed, with large numbers of children from the age of seven, although this was increased to ten by the time Richard handed the business over to his son; However, towards the end of his tenure, nearly two-thirds of Arkwright's 1,150 employees were children. He allowed employees a week's holiday a year, but on condition that they could not leave the village.

He returned to his home county and took up the lease of the Birkacre mill at Chorley, a catalyst for the town's growth into one of the most important industrialised towns of the Industrial Revolution.

In 1777 he leased the Haarlem Mill in Wirksworth, Derbyshire, where he installed the first steam engine to be used in a cotton mill, though this was used to replenish the millpond that drove the mill's waterwheel rather than to drive the machinery directly.[6][7]

Arkwright also created another factory, Masson Mill. It was made from red brick, which was expensive at the time. In the mid-1780s, Arkwright lost many of his patents when courts ruled them to be essentially copies of earlier work.[8] Despite this, he was knighted in 1786[8] and was High Sheriff of Derbyshire in 1787.

Aggressive and self-sufficient, Arkwright proved a difficult man to work with. He bought out all his partners and went on to build factories at Manchester, Matlock Bath, New Lanark (in partnership with David Dale) and elsewhere. Unlike most entrepreneurs, who were nonconformist, he attended the Church of England.

Arkwright's achievements were widely recognised; he served as high sheriff of Derbyshire and was knighted in 1786.[9] Much of his fortune derived from licensing his intellectual rights; about 30,000 people were employed in 1785 in factories using Arkwright's patents. He died at Rock House, Cromford, on 3 August 1792, aged 59, leaving a fortune of £500,000. He was buried at St. Giles Church in Matlock. His remains were later moved to St. Mary's Church in Cromford.[10][11]

The Arkwright Society, set up after the bicentenary of Cromford Mill, now owns the site and works to preserve the industrial heritage of the area. 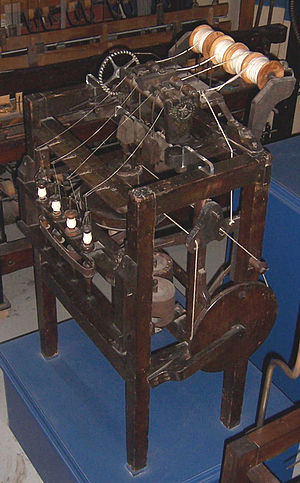 An Arkwright water frame that was made in 1775.

Arkwright had previously assisted Thomas Highs, and there is strong evidence to support the claim that it was Highs, and not Arkwright, who invented the spinning frame. However, Highs was unable to patent or develop the idea for lack of finance. Highs, who was also credited with inventing a Spinning Jenny several years before James Hargreaves produced his, probably got the idea for the spinning frame from the work of Bray Wyatt and Lewis Paul in the 1730s and '40s.

The machine used a succession of uneven rollers rotating at increasingly higher speeds to draw out the roving, before applying the twist via a bobbin-and-flyer mechanism. It could make cotton thread thin and strong enough for the warp, or long threads, of cloth.

His main contribution was not so much the inventions as the highly disciplined and profitable factory system he set up at Cromford, which was widely emulated. There were two 13-hour shifts per day including an overlap. Bells rang at 5 am and 5 pm and the gates were shut precisely at 6 am and 6 pm. Anyone who was late not only could not work that day but lost an extra day's pay. 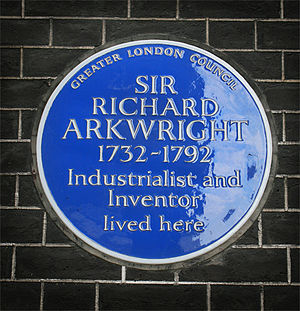