Mayo was born in Dublin, the eldest son of Robert Bourke, 5th Earl of Mayo, and his wife, Anne Charlotte, daughter of the Hon. John Jocelyn. His younger brother the Hon. Robert Bourke was also a successful politician. He was educated at Trinity College, Dublin.[1]

After travelling in Russia, Mayo entered parliament for Kildare in 1847, a seat he held until 1852, and then represented Coleraine from 1852 to 1857 and Cockermouth from 1857 to 1868. He was thrice appointed Chief Secretary for Ireland – in 1852, 1858 and 1866 – and in 1869 he became the fourth Viceroy of India where he was locally often referred to as "Lord Mayo". He consolidated the frontiers of India and reorganised the country's finances; he also did much to promote irrigation, railways, forests and other useful public works.To solve local problems he established local boards. During his tenure first census took place in 1872. The European-oriented Mayo College at Ajmer was founded by him for the education of young Indian chiefs, with £70,000 being subscribed by the chiefs themselves.

While visiting the convict settlement at Port Blair in the Andaman Islands in 1872 for the purpose of inspection, he was assassinated by Sher Ali Afridi, an Afridi Pathan convict who used a knife. His murderer appeared to be motivated only by a sense of injustice at his own imprisonment, and had resolved to kill a high-ranking colonial official. Mayo's body was brought home to Ireland and buried at the medieval ruined church in Johnstown, County Kildare, near his home at Palmerstown House. Afridi was hanged.

In 1873, the newly discovered swallowtail butterfly Papilio mayo from the Andaman Islands was named in his honour. The traditional Irish march Lord Mayo (Tiagharna Mhaighe-eo) was named after him; according to tradition, it was composed by his harper David Murphy to appease Mayo after Murphy angered him.[2][3] 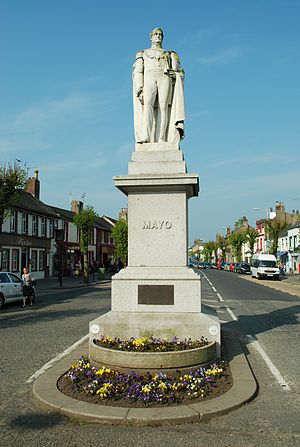 Statue of Lord Mayo in the town of Cockermouth

On 19 August 1875 a statue of Lord Mayo was unveiled in the town of Cockermouth in the centre of the main street. The 800-guinea cost of the statue (made by Messrs. Willis of London) had been raised by public subscription. The unveiling was attended by Mayo's son, the 7th Earl; Lord Napier and Ettrick; the Bishop of Carlisle Harvey Goodwin: and the Earl of Lonsdale. The statue, carved in Sicilian marble, depicts Lord Mayo in his viceregal garb, and still stands today.

In 2007, a statue of Lord Mayo was unearthed in Jaipur, India, after being buried for six decades. This statue had earlier been installed in the premises of Mayo Hospital, currently known as the Mahilya Chikatsalya, Jaipur. The 9-foot-tall (2.7 m) cast-iron statue, weighing around 3 tons, was ordered sculpted by the Maharaja Ram Singh ji of Jaipur, as a tribute to Lord Mayo after his assassination. The sculptors were J. Forsyth and R. Monti. The company's name as inscribed on the statue was R. Masefield & Co., London. To prevent it from vandalism, this statue was buried in the premises of the Albert Hall Museum of Jaipur at the time of the independence of India. After six decades, this statue was unearthed by the Jaipur Mayo Alumni Chapter on 29 May 2007 from the premises of the Albert Hall Museum in Jaipur and sent to Mayo College, in Ajmer, India, where it is installed now.[4] Mayo College in Ajmer already had a full life size statue of Lord Mayo sculpted in white marble installed in front of its famous Main Building since inception and a marble sculpted bust of him in its School Museum.

Lord Mayo married Blanche Julia, daughter of George Wyndham, 1st Baron Leconfield, in 1848. He was succeeded in the earldom by his eldest son, Dermot. Lady Mayo died in 1918.