The Rt. Hon. Richard Boyle, 3rd Earl of Burlington and 4th Earl of Cork, KG, PC (25 April 1694 – 15 December 1753), born in Yorkshire, England, was the son of The 2nd Earl of Burlington and 3rd Earl of Cork and Juliana Noel (1672-1750). Burlington was called 'the Apollo of the Arts' and 'the architect Earl', never taking more than a passing interest in politics despite his position as a Privy Counsellor and a member of both the British House of Lords and the Irish House of Lords.

He is remembered for bringing Palladian architecture to Britain and Ireland. His major projects include Burlington House, Westminster School, Chiswick House and Northwick Park.

Lord Burlington was born in Yorkshire into a wealthy Anglo-Irish aristocratic family. Often known as 'the architect Earl', he was instrumental in the revival of Palladian architecture in both Great Britain and the Kingdom of Ireland. He succeeded to his titles and extensive estates in Yorkshire and Ireland at the age of nine, after his father's death in February 1704. During his minority, which lasted until 1715, his English and Irish lands and political interests were managed on his behalf by his mother and guardian, the dowager countess Juliana.[1] He showed an early love of music. Georg Frideric Handel dedicated two operas to him, while staying at Burlington House: Teseo and Amadigi di Gaula. According to Hawkins, Francesco Barsanti dedicated the six recorder sonatas of his Op. 1 to Lord Burlington, although the dedication must have appeared on the manuscript copies sold by Peter Bressan, before Walsh & Hare engraved the works c. 1727.[2] Three foreign Grand Tours 1714 – 1719 and a further trip to Paris in 1726 gave him opportunities to develop his taste. His professional skill as an architect (always supported by a mason-contractor) was extraordinary in an English aristocrat. He carried his copy of Andrea Palladio's book I quattro libri dell'architettura with him in touring the Veneto in 1719, and made notes on a small number of blank pages. In 1719 he was one of main subscribers in the Royal Academy of Music, a corporation that produced baroque opera on stage.[3][4] 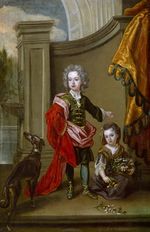 Portrait of Richard Boyle as a boy, with his sister Lady Jane Boyle, ca. 1700.

Burlington never closely inspected Roman ruins or made detailed drawings on the sites; he relied on Palladio and Scamozzi as his interpreters of the classic tradition. Another source of his inspiration were drawings he collected, some drawings of Palladio himself, which had belonged to Inigo Jones and many more of Inigo Jones' pupil John Webb, which William Kent published in 1727 (although a date of 1736 is generally accepted) as Some Designs of Mr Inigo Jones... with Some Additional Designs that were by Kent and Burlington. The important role of Jones' pupil Webb in transmitting the palladian—neo-palladian heritage was not understood until the 20th century. Burlington's Palladio drawings include many reconstructions after Vitruvius of Roman buildings, which Burlington planned to publish. In the meantime, in 1723 he adapted the palazzo facade in the illustration for the London house of General Wade in Old Burlington Street, which was engraved for Vitruvius Britannicus iii (1725). The process put a previously unknown Palladio design into circulation.

Burlington's first project, appropriately, was his own London residence, Burlington House, where he dismissed his baroque architect James Gibbs when he returned from the continent in 1719 and employed the Scottish architect Colen Campbell, with the history-painter-turned-designer William Kent for the interiors. The courtyard front of Burlington House, prominently sited in Piccadilly, was the first major executed statement of neo-Palladianism. 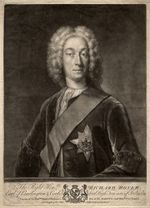 By the early 1730s Palladian style had triumphed as the generally accepted manner for a British country house or public building. For the rest of his life Burlington was "the Apollo of the arts" as Horace Walpole phrased it— and Kent his 'proper priest."

In 1739, Lord Burlington was involved in the founding of a new charitable organisation called the Foundling Hospital. Burlington was a governor of the charity, but did not formally take part in planning the construction of this large Bloomsbury children's home completed in 1742. Architect for the building was a Theodore Jacobsen, who took on the commission as an act of charity.

Many of Burlington's projects have suffered, from rebuilding or additions, from fire, from losses due to urban sprawl. In many cases his ideas were informal: at Holkham Hall the architect Matthew Brettingham recalled that "the general ideas were first struck out by the Earls of Burlington and Leicester, assisted by Mr. William Kent." Brettingham's engraved publication of Holkham credited Burlington specifically with ceilings for the portico and the north dressing-room.

Burlington's architectural drawings, inherited by his son-in-law the Duke of Devonshire, are preserved at Chatsworth, and enable attributions that would not otherwise be possible. In 1751 he sent some of his drawings to Francesco Algarotti in Potsdam together with a book on Vitruvius.[5]

File:PalladioPalazzoJonesBurlingon.jpg
Palazzo facade drawn by Andrea Palladio, purchased in Italy by Inigo Jones. Burlington purchased it from the heirs of Jones' pupil John Webb and adapted it for the London House of General Wade. Note the Palladian window.
File:Burlington house1855.gif
Colen Campbell's Burlington House as it was in 1855, before a third storey was added 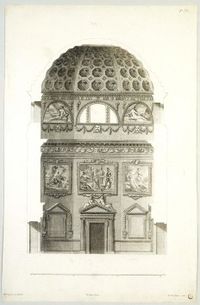 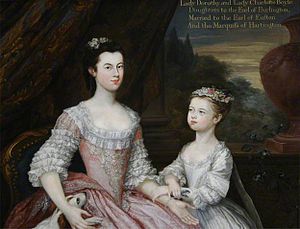 They had two children: