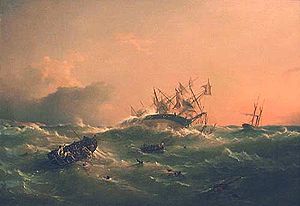 At fourteen years of age Richard joined the Royal Navy, in time rising to the rank of admiral. Like his father and two of his brothers Richard was a celebrated painter, who illustrated various ports and naval scenes.[1]

After the Royal Naval College, Portsmouth, Beechey sailed in HMS Blossom, commanded by Frederick William Beechey, his brother, in the Pacific, and to the Bering Strait to attempt to support the Franklin Expedition. He was promoted lieutenant in 1828.[2] Then he served in the Mediterranean, and in 1835 was seconded to a survey of Ireland. He was made commander in 1846, and then in 1851 was promoted captain.[3]

In 1844, he married Frideswide Maria Moore Smyth (1819–1885) of Portlick Castle, Westmeath.[4] They had two daughters, Annie L. Beechey and Frideswide F. Beechey (1851–1919). In 1882 Frideswide was the first women to win a prize as a composer of chess problems and her book Chess Blossoms was published in 1883 followed by Chess Fruits in 1884, which she co-wrote with her husband Thomas B Rowland 1850-1926. He was also a noted chess player and columnist

In 1888, some three years after the death of his wife, Richard married Frances, daughter of the Rev. Annesley Stewart of Trinity College, Dublin.