From Infogalactic: the planetary knowledge core
Jump to: navigation, search
For the British poet with the same name, see Richard Burns (poet).

Richard Alexander Burns (January 17, 1971 – November 25, 2005) was a British rally driver who won the 2001 World Rally Championship, having previously finished runner-up in the series in 1999 and 2000. Born in Reading, Berkshire, he also helped Mitsubishi to the world manufacturers' title in 1998, and Peugeot in 2002. His co-driver in his whole career was Robert Reid. Burns was known by his smooth, methodical driving style, which was unusual for such a young driver of his generation.

He started driving in a field near his house at the age of eight, in his father's old Triumph 2000. At eleven Burns joined the Under 17 Car Club, where he became driver of the year in 1984. Just two years later his father arranged a trip to Jan Churchill's Welsh Forest Rally School near Newtown, Powys where Burns drove a Ford Escort for the day, and from that moment on he knew what he wanted to do. He badgered his father into letting him join the Craven Motor Club in his home town Reading where his talent was spotted by rally enthusiast David Williams. In 1988 he entered his first rallies in his own Talbot Sunbeam. The car was too basic to make much impression and in 1989 he had to borrow other competitors cars to progress. To this end he rallied the stages of Panaround, Bagshot, Mid-Wales, Millbrook, Severn Valley, Kayel Graphics and the Cambrian Rally[1] as these were all rallies which included stages used on more prestigious events.[2]

In 1990 he joined the Peugeot Challenge after David Williams bought Burns a Peugeot 205 GTI. He got his first taste of a World Rally Championship event in Great Britain as a prize for winning the Peugeot Challenge that year. In 1991 Burns met Robert Reid, the man who was to become his co-driver for the next 12 years. For 1992 Williams bought Burns a Group N Subaru Legacy and with the support of Prodrive won the National Championship. This year also saw Burns help out Colin McRae with his gravel notes[3] as Prodrive saw him as a promising driver for the future.

In 1993 he joined the Subaru Rally Team for the British Rally Championship alongside Alister McRae, driving a Subaru Legacy. He won four rounds, the Vauxhall Sport, Pirelli, Scottish, and Manx International, and became the youngest ever British Champion. He finished seventh on that year's snowy RAC Rally. In the wake of his 1993 success, Burns remained with Subaru for the 1994 and 1995 seasons, contesting the Asia Pacific Rally Championship, which included the New Zealand and Australia Rallies, and also his home WRC round. His best result was third on the 1995 RAC Rally, behind team mates Carlos Sainz and winner and world champion Colin McRae.

1996 saw an opening with Mitsubishi Ralliart at international level, seized upon with sufficient vigour to guide Burns to victory on that year's Rally New Zealand – albeit then, only a fixture within the Asia-Pacific Rally Championship and the FIA 2-Litre World Rally Cup. Even so, the fending off of such calibre competition as works-backed Subaru heavyweights Kenneth Eriksson and Piero Liatti only added gloss to an increasingly fervoured reputation. In 1997 he was driving a same car as his team-mate Tommi Makinen had, Group A Mitsubishi Lancer Evolution VI, however it was re-badged as Carisma GT. His results are improving, from 8 rallies he had participated he finished five 4th place, and 2nd at Safari Rally, putting him seventh in the championship.

Come 1998, he had won his maiden World Rally Championship event on the Safari, which was known as the most challenging and difficult rally, then He added a second career victory on his swansong outing for Mitsubishi on that year's Rally GB, the event where the dramatic late retirement from fourth of Toyota's Carlos Sainz secured the drivers' title for his team-mate and first leg super special stage retiree on a patch of oil, Tommi Makinen, as well as confirming the constructors' accolade for Mitsubishi. 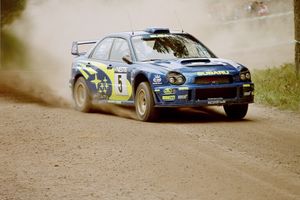 Burns driving a Subaru Impreza WRC at the 2001 Rally Finland.

Burns moved to the Prodrive-run Subaru World Rally Team under David Richards for the 1999 season, joining Juha Kankkunen and Bruno Thiry as part of the factory team driving Subaru Impreza WRCs, replacing Ford-bound fellow Briton, Colin McRae. Burns worked his way to a career high of second place in the drivers' standings, adding to his win tally. He also led Subaru to second in the constructors' series behind the Formula One departing Toyota Team Europe. On that year's Rally Argentina, he was upstaged for victory by virtue of a team order mix-up by veteran team-mate Kankkunen. He was a long-time contender for the title in 2000, but crashed out on the Rally Finland in mid-season handing the momentum to eventual champion, and future team-mate, the Peugeot driver Marcus Grönholm who had been competing in his first year as a full-time factory driver. Even so, a stirling comeback from the lower reaches of the top thirty to win on the season-ending Rally of Great Britain kept the Burns name well entrenched within public consciousness. 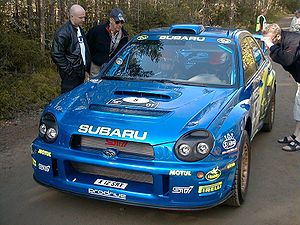 The 2001 rally season began inauspiciously for Burns – neither of the season curtain raisers, the Monte Carlo Rally or the Swedish Rally, yielded points scores, placing in peril before it had begun, the Englishman's title bid. Fourth place in a rain-drenched Portugal kicked his campaign into action prior to second-place finishes on the gravel rallies of Argentina and Cyprus, on both occasions to Ford's Colin McRae. Nonetheless, both the Scotsman and Monte Carlo victor Tommi Mäkinen were later to hit upon snags of their own, while Burns' own consistent points scoring culminated in a first and only individual rally victory of the season in New Zealand, with McRae beaten into second. Burns then finished second on the Rally Australia to close within two points of new standalone series leader McRae, although the Scotsman and Mäkinen were to struggle to fifth and sixth respectively on this event (and the last of the drivers' points-scoring positions) amid controversy over McRae arriving to time control too late at the end of the first leg of the event to be able to choose a favourable running order on the ball-bearing gravel for day two. Meanwhile the Finn, for his part, continued to struggle with a newly homologated version of the Mitsubishi Lancer Evolution World Rally Car he had been entrusted with, which had only been introduced by his team a few rounds earlier in San Remo. A four-way title decider, also including nine-point adrift outsider, Ford driver Carlos Sainz, thus beckoned on the final round of the series in Great Britain.

There, all three of Burns' rivals were to have suffered retirement from the event by the end of the second leg proceedings on Saturday. On Sunday, November 25, 2001, therefore, Burns' third-place finish behind Peugeot duo Gronholm and Harri Rovanpera enabled him to become the first Englishman to win the World Rally Championship, with 44 points, he was the world champion with lowest point since F1-Styled point system was introduced in 1997. When Richard passed the finishing line at the final stage of the final rally in 2001, Burns uttered words thought to be paying tribute to his codriver Robert Reid: "You're the best in the world". To commemorate the title success, Subaru produced a special edition of the Subaru Impreza in the UK called the RB5[1][2]. A messy legal battle ensued for the Englishman's services for the following 2002 season, from which fresh suitors, 2000 and 2001 manufacturers' champions Peugeot emerged victorious.

File:Burns Deutschland 2002.jpg
Burns with a Peugeot 206 WRC at the 2002 Rallye Deutschland

Burns joined Peugeot for the 2002 season. Although Peugeot were the pacesetting team of the period, Burns had difficulty matching the pace of team-mates Marcus Grönholm (on gravel) and Gilles Panizzi (on tarmac). Therefore the existing tally of ten WRC triumphs were not to be added to, with the quest for a second world title proving equally fruitless for Burns. He won the Rally Argentina, but soon he was disqualified as his 206 was found underweight, handing the victory to Sainz, and in Rally New Zealand he was leading until day 3 when he rolled his car, forcing him to retire. He cobbled together a title challenge, albeit founded more on regular podium finishes than on victories, for much of the 2003 season – a feat which did not convince him to remain at the wheel of the 206 WRC.

In the 2003 season, he was still winless, although 7 podiums means he led the championship at most of the season. The gloomy prospect of a continued winning drought with the French team left Burns poised to rejoin Subaru, having signed for them for the second time beginning with the 2004 season, the ploy being to couple him with the eventual 2003 title winner, Norway's Petter Solberg. In November 2003, however, with the Englishman heading to the season-ending Wales Rally GB still with a chance of winning the title, Burns suffered a blackout while driving with Ford driver Markko Märtin to the rally. He was withdrawn from the event, and thus the title fight, and was later diagnosed with an astrocytoma, a type of malignant brain tumour.[4] Treatment during 2004 was followed by surgery in April 2005 that was described as "very successful".[5] But the diagnosis, that this type of brain tumor was malignant, was only soon realised. On August 2005 a fan day was made in which Burns' supporters were invited to see his private car collection, but he was unable to drive so his co-driver Robert Reid took the seat on his private cars.

Late on Friday, November 25, 2005, four years to the day after winning the World Rally Championship, Burns died in Westminster, London,[6] aged 34, after having been in a coma for some days as a result of a brain tumour.[7] The British television show Top Gear aired a tribute to Burns during the December 4, 2005 show (Season 7, episode 4). The host, Jeremy Clarkson, said that "the news has been completely dominated, as far as we're concerned, by the sad death of Richard Burns." After playing a montage of Richard Burns footage, Clarkson, who lived near Burns, shared an anecdote about Burns playing video games with Clarkson's 7-year-old son and commented, "He was just such a nice guy. I'm going to miss him...badly." No other motoring news was announced in that episode. Burns had previously appeared on Top Gear twice, once touting rallying as more interesting and influential than Formula One, and then test-driving the Peugeot RC. Apart from the Top Gear tribute and others from the motorsport media, media coverage and public attention to his death was overshadowed by that of football legend George Best, who died on the same day.[8]

A memorial service for Burns was held at St Luke's Church, Chelsea on Thursday 22 December 2005,[9] with readings from BBC TV's Jeremy Clarkson and Steve Rider, and a tribute paid by one of Burns' closest friends, photographer Colin McMaster. Subaru also paid tribute to Burns at Castle Combe in 2006, when over 50 Subaru Impreza RB5s took to the track, including the RB5 number No. 001 driven by Alex Burns, Richard's father.

During the 2006 Goodwood Festival of Speed, a charity was founded in his name with a purpose to "inspire and support people with serious injury and illness", named RB Foundation.[10] The foundation also raises money for the Michael Park Fund, which deals with improving safety in motorsport events.

Subaru released a special edition Impreza WRX STI in 2007 – the RB320 – in memory of Burns. It features a 320 bhp (240 kW) Prodrive Performance Pack, Prodrive developed suspension, sports spring kit and is available only in obsidian black colour. Proceeds went to the RB Foundation.[11][12]

The Scottish band Travis dedicated their album The Boy With No Name to Burns' memory.[13]

He is survived by his father Alex and girlfriend Zoe Scott (née Keen).[14] Burns became a tax exile in 2002, moving to Andorra, and had planned to become a property developer after his eventual retirement.[15]