Crenna was born in Los Angeles, the only child of Edith J. (née Pollette), who was a hotel manager in LA, and Domenick Anthony Crenna, a pharmacist. His parents were both of Italian descent.[3] Crenna attended Virgil Junior High School, followed by Belmont High School in Los Angeles. Following high school, Crenna served in the US Army during World War II, serving in the infantry as a radioman - where he saw combat duty in the European Theater at the Battle of the Bulge. Crenna also served in the Pacific Theater decoding Japanese intercepts. Following World War II, Crenna attended the University of Southern California where he majored in English.[4][2]

Richard Crenna got his acting start on radio. In 1937, he had gained his first role that of "the kid who did everything wrong" on Boy Scout Jamboree, a show on which he continued to appear occasionally in numerous roles until 1948. In the following year, he started playing Walter "Bronco" Thompson on The Great Gildersleeve, and played it until the show's end in 1957. He appeared as a delivery boy in My Favorite Husband episode "Liz Cooks Dinner for 12", was Oogie Pringle on A Date With Judy episode "The Competitive Diet" and several other episodes from the show and as a teenager on The George Burns and Gracie Allen Show episode "Watching the Neighbor's Daughter". From 1948 to 1952, he was Walter Denton on Our Miss Brooks and remained with the cast when they moved it to a television show. He guest starred on the I Love Lucy episode, "The Young Fans" with Janet Waldo and on NBC's 1955-56 anthology series, Frontier, in the lead role of the episode entitled "The Ten Days of John Leslie".[citation needed] In 1956, on the television series Father Knows Best, Crenna appeared in the episode "The Promising Young Man" as a protege, named Woody.

When the Our Miss Brooks TV series, which starred Eve Arden, underwent a change in format, his character Walter Denton was written off this series. Then, Crenna joined the cast of the comedy series, The Real McCoys as Luke McCoy. Kathleen Nolan was cast as his young wife, Kate McCoy in this series. Later, Crenna became one of the four directors of the series during its six-year run (1957-1963). He also directed many of the episodes of the Andy Griffith Show. 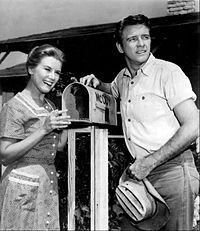 Crenna and Kathleen Nolan in The Real McCoys, 1960

Crenna portrayed the state senator James Slattery of California in the TV series Slattery's People (1965–66), and for his acting in this series, he was twice nominated for Emmy Awards with slightly different names: for "Outstanding Individual Achievements in Entertainment", in 1965, and for "Outstanding Continued Performance by an Actor in a Leading Role in a Dramatic Series", in 1965. Crenna was also nominated for a Golden Globe Award for "Best TV Star - Male" in 1965, for this same role. During the 1970s Crenna continued his acting in such Western dramas such as Catlow, Breakheart Pass, and The Man Called Noon. He made a notable performance in Jean-Pierre Melville's final film Un Flic in 1972.

Crenna won an Emmy Award,[2] and a nomination for a Golden Globe Award for Best Performance by an Actor in a Mini-Series or Motion Picture Made for Television,[citation needed] for his performance as the main character in the movie The Rape of Richard Beck.[5] 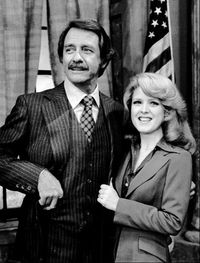 Crenna portrayed the character of New York City Police Lieutenant of Detectives Frank Janek in a series of seven popular made for television films starting in 1988 and ending in 1994.

Crenna is perhaps best known today for his role as John Rambo's ex-commanding Officer Colonel Sam Trautman in the first three Rambo films, a role for which he was hired after the actor Kirk Douglas left the production just one day into the filming of the first movie of the series. Crenna himself also spoofed this character in the movie Hot Shots! Part Deux, in 1993.

Crenna was awarded with a star on the Hollywood Walk of Fame located at 6714 Hollywood Boulevard. Crenna's performances were also reportedly the inspiration for the character "Colonel Roy Campbell" in the Metal Gear series of games.

Crenna suffered from pancreatic cancer during his later years, but he reportedly died of heart failure in 2003. His remains were cremated and the ashes were given to family or friend.[6] [7] At the time of his death, Crenna was portraying the recurring character of Jared Duff in Judging Amy. Crenna's death necessitated the death of Jared Duff as well.