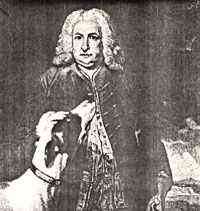 He was the son of Sir Richard Edgcumbe and Lady Anne Montagu, daughter of the Earl of Sandwich. Educated at Trinity College, Cambridge,[1] he was successively Member of Parliament for St Germans, Plympton Erle and Lostwithiel from 1701 to 1742.

On two occasions he served as a lord of the treasury; and from 1724 to 1742 he was Paymaster-General for Ireland, becoming Chancellor of the Duchy of Lancaster in December 1742. Edgcumbe was a faithful follower of the Whig Sir Robert Walpole, in whose interests he managed the elections for the Cornish boroughs, and his elevation to the peerage, which took place in 1742, was designed to prevent him from giving evidence about Walpole's expenditure of the secret service money.

He had married Matilda Furnese, the daughter of Sir Henry Furnese of Waldershare in Kent who died in 1721. They had four children of whom the eldest son died young. Richard was succeeded by his eldest surviving son, Richard (1716–1761) and after the latter's death, by his second surviving son George.