Richard FitzAlan, 4th or 11th Earl of Arundel and 9th Earl of Surrey, KG (1346 – 21 September 1397) was an English medieval nobleman and military commander.

Born in 1346, he was the son of Richard FitzAlan, 10th Earl of Arundel and Eleanor of Lancaster.[2] He succeeded his father to the title of Earl of Arundel on 24 January 1376.

At the coronation of Richard II, Richard FitzAlan carried the crown.[2] 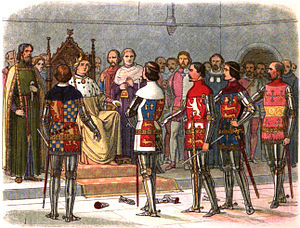 In 1377, Richard FitzAlan held the title of Admiral of the West and South.[2] In this capacity, he attacked Harfleur at Whitsun 1378, but was forced to return to his ships by the defenders. Later, he and John of Gaunt attempted to seize Saint-Malo but were unsuccessful.[4]

FitzAlan was closely aligned with Thomas, Duke of Gloucester, who was uncle of King Richard II. Thomas was opposed to Richard II's desire for peace with France in the Hundred Years War and a power struggle ensued between him and Gloucester. In late 1386, Gloucester forced King Richard II to name himself and Richard FitzAlan to the King's Council.[5] This Council was to all intents and purposes a Regency Council for Richard II. However, Richard limited the duration of the Council's powers to one year.[6]

Knight of the Garter

In 1386, Richard II named Richard FitzAlan Admiral of England, as well as being made a Knight of the Garter.[2] As Admiral of England, he defeated a Franco-Spanish-Flemish fleet off Margate in March 1387, along with Thomas de Mowbray, Earl of Nottingham.[6]

In August of 1387, the King dismissed Gloucester and FitzAlan from the Council and replaced them with his favourites - including the Archbishop of York, Alexander Neville; the Duke of Ireland, Robert de Vere; Michael de la Pole; the Earl of Suffolk, Sir Robert Tresilian, who was the Chief Justice; and the former Mayor of London Nicholas Brembre.[7]

The King summoned Gloucester and FitzAlan to a meeting. However, instead of coming, they raised troops and defeated the new Council at Radcot Bridge on 22 December 1387. During that battle, they took the favourites prisoner. The next year, the Merciless Parliament condemned the favourites.

FitzAlan was one of the Lords Appellant who accused and condemned Richard II's favorites.[5] He made himself particularly odious to the King by refusing, along with Gloucester, to spare the life of Sir Simon de Burley who had been condemned by the Merciless Parliament. This was even after the queen, Anne of Bohemia, went down on her knees before them to beg for mercy. King Richard never forgave this humiliation and planned and waited for his moment of revenge.

In 1394, FitzAlan further antagonized the King by arriving late for the queen's funeral. Richard II, in a rage, snatched a wand and struck FitzAlan in the face and drew blood. Shortly after that, the King feigned a reconciliation but he was only biding his time for the right moment to strike. Arundel was named Governor of Brest in 1388.[2]

Peace was concluded with France in 1389. However, Richard FitzAlan followed Gloucester's lead and stated that he would never agree with the peace that had been concluded.[5]

His first wife was Elizabeth de Bohun, daughter of William de Bohun, 1st Earl of Northampton and Elizabeth de Badlesmere. They married around 28 September 1359 and had seven children:[2][8]

After the death of his first wife in 1385, Arundel married Philippa Mortimer, daughter of Edmund Mortimer, 3rd Earl of March. Her mother was Philippa Plantagenet, the only daughter of Lionel of Antwerp and thus a granddaughter of Edward III. They had no children.[2]

On 12 July 1397, Richard FitzAlan was arrested for his opposition to Richard II,[2] as well as plotting with Gloucester to imprison the king.[10] He stood trial at Westminster and was attainted.[11] He was beheaded on 21 September 1397 and was buried in the church of the Augustin Friars, Bread Street, London.[2] Tradition holds that his final words were said to the executioner, "Torment me not long, strike off my head in one blow".[12]

In October 1400, the attainder was reversed, and Richard's son Thomas succeeded to his father's estates and honors.[2]