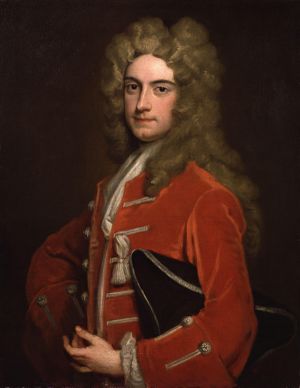 The second son of the 1st Earl of Scarbrough, Lumley was educated at Eton and King's College, Cambridge.[2] In 1708, he entered Parliament as MP for East Grinstead and took over from his recently deceased, elder brother as MP for Arundel in 1710. In 1715, he was called to the House of Lords in his father's barony of Lumley and fought against the Jacobites at Preston, Lancashire that year.

On 2 May 1721 he stood as proxy for Ernest, Duke of York at the baptism of William Augustus, Duke of Cumberland.

After inheriting his father's titles in 1721, Scarbrough became Lord Lieutenant of Northumberland and Colonel of the Coldstream Guards in 1722 and Master of the Horse in 1727, having been made a Knight of the Garter and admitted to the Privy Council. In 1739, he was one of the founding governors for the Foundling Hospital in London.

In 1740, aged 53, Lord Scarbrough committed suicide by shooting himself through the roof of the mouth; at the time of his death it was rumoured to have been brought on by a mental disorder he developed from a knock on the head when he had an accident in his carriage a few days before. This, however, seems to have been a story circulated by his friends to disguise the truth of the matter. He had been due to marry the dowager Duchess of Manchester, but she had betrayed a secret sensitive to the King, told to her by the Earl. The King, on discovering the error in judgement by his minister, proclaimed, "Lumley, you have lost a friend and I a good servant." It is thought that the honourable Earl could not bear this dishonour and took his own life as a direct result of the Duchess disclosing what he had told her in confidence.

Far from being an act resulting from mental disorder, there is contemporary evidence that he knew full well what he was doing. Books were discovered at the scene of his death laid open at specific places for the benefit of close friends.

He was buried on 4 February 1740 in Grosvenor Chapel, South Audley Street, Mayfair. The chapel stands today much as it did in 1740, despite there being no marker for the Earl.

Dying unmarried and without male issue, his titles passed to his brother, Thomas.