Background prior to dedication

Historically, all presidential papers were considered the personal property of the president. Some took them at the end of their terms while others destroyed them. Franklin D. Roosevelt was the first to make them available to the public when he donated them to the National Archives in 1939, as the Franklin D. Roosevelt Presidential Library and Museum, but did so voluntarily.[1] The Watergate scandal and Richard Nixon's subsequent resignation from office complicated the issue, however.

In September 1974, Richard Nixon made an agreement with the head of the General Services Administration, Arthur F. Sampson, to turn over most materials from his presidency, including tape recordings of conversations he had made in the White House; however, the recordings were to be destroyed after September 1, 1979, if directed by Nixon or by September 1, 1984, or his death otherwise. Alarmed that Nixon's tapes may be lost, Congress abrogated the Nixon–Sampson Agreement by passing the Presidential Recordings and Materials Preservation Act, which was signed into law by President Gerald Ford in December 1974. It applied specifically to materials from the Nixon presidency, directing NARA to take ownership of the materials and process them as quickly as possible. Private materials were to be returned to Nixon.

As a result of the Presidential Recordings and Materials Preservation Act, President Nixon's White House papers and tapes were held by the National Archives, thus they could not be transferred to a facility in Yorba Linda. Funding to build the Nixon Library came from private sources. The estimated cost to build the institution was $25 million.[2] Ground was broken by Julie Nixon Eisenhower, daughter of President and Mrs. Nixon, in December 1988.[2]

The original library and birthplace was officially dedicated on July 19, 1990. Former President Nixon and First Lady Pat Nixon were present, as were President George H. W. Bush, former President Gerald Ford, former President Ronald Reagan, and first ladies Barbara Bush, Betty Ford, and Nancy Reagan. A crowd of 50,000 gathered for the ceremony.[3] At the dedication, Nixon said, "Nothing we have ever seen matches this moment–to be welcomed home again."[3] 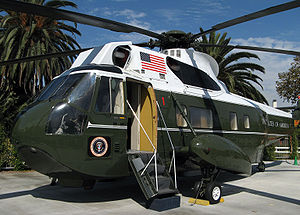 The President's VH-3A "Sea King" helicopter is on permanent display. 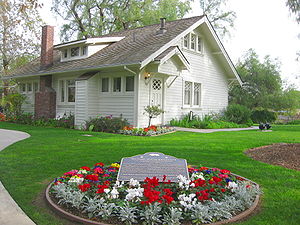 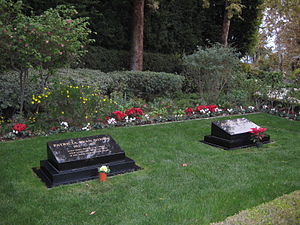 The graves of President Richard Nixon and First Lady Pat Nixon located on the library grounds.

The museum, housed in a 52,000-square-foot (4,800 m2) building, offers a narrative of Nixon's life and career. Behind the museum is the birthplace, which was constructed by Nixon's father using a homebuilding kit, and restored to appear as it was in the 1910s. President Nixon and Pat Nixon are buried on the grounds, just a few feet from the birthplace.

The Nixon Library compound also contains the Katharine B. Loker Center and Annenberg Court, a 38,000-square-foot (3,500 m2) wing constructed in 2004, which includes a special exhibit room and an exact replica of the East Room of the White House that is used as an event space; the Nixon Foundation leases the East Room for events such as weddings and business meetings.

There is an extensive collection of memorabilia, artifacts, formal clothing, and photographs of the Nixons and their children. This collection includes an assortment of bronze figures of world leaders who had important relations with Nixon as president or during his service as vice president under President Dwight D. Eisenhower from 1953 to 1961. The leaders have been accurately recreated in lightweight bronze over a papier-mâché frame, and they are dressed in their actual clothing. The U.S. government limousine used by President Nixon throughout his presidency, a customized 1969 Lincoln Continental, is on display in the domestic affairs gallery. A 12 feet (3.7 m) piece of the Berlin Wall is exhibited in the expansive foreign affairs gallery, which also includes a replica of a modest Midwest home from where American soldiers originated, statues of Nixon and Chinese Premier Zhou Enlai and pages of the Strategic Arms Limitation Treaty I signed by Nixon and Soviet General Secretary Leonid Brezhnev in 1972.

Lieutenant Colonel Gene Boyer, President Nixon's chief helicopter pilot, secured the President's VH-3A "Sea King" helicopter, tail number 150617, to be on permanent display on the library grounds. The helicopter was in the presidential fleet from 1961 to 1976, transporting Presidents Kennedy, Johnson, Nixon, and Ford, and many foreign heads of state and government. Boyer flew President Nixon dozens of times to Camp David, over the pyramids in Egypt, and on his final flight from the White House in this aircraft.

In January 2004, the United States Congress passed legislation that provided for the establishment of a federally operated Nixon Presidential Library. Specifically, the legislation amended the Presidential Recordings and Materials Preservation Act of 1974, which mandated that Nixon's presidential materials were to remain in National Archives II facility in College Park, Maryland. Under this new legislation, over 30,000 presidential gifts as well as millions of presidential records were moved from College Park to Yorba Linda.[4]

In March 2005, the Nixon Foundation invited the National Archives to jointly operate the Nixon Library, and then-Archivist of the United States Allen Weinstein allowed for the Nixon Library to become the twelfth federally funded presidential library, operated and staffed by NARA in conjunction with the Nixon Foundation. In April 2006, Weinstein appointed Timothy Naftali director of the Library. On July 11, 2007, the Richard Nixon Presidential Library and Museum was officially welcomed into the federal presidential library system.

Before the National Archives took over its management, the Nixon Library had been accused by several media outlets of glossing over Nixon's 1974 resignation with "whitewashed" exhibits.[5] In 2007, the National Archives removed the Watergate exhibit that had been in place for 17 years and, after three years of empty exhibit space, announced that the new exhibit was scheduled to open in July 2010. The Nixon Foundation objected to the proposed exhibit, specifically the process by which the proposed exhibit was crafted due to the fact that the Nixon Foundation was not consulted in the way that other presidential foundations are in similar situations. The foundation filed a 158-page memorandum to the assistant archivist for presidential libraries expressing its dissatisfaction[6][7] and NARA stated a committee would review the objection but gave no timeline for when that process would be concluded.[8] The exhibit opened on March 31, 2011.[9]

In November 2011, the director of the library, Tim Naftali, resigned his position.[10] Michael Ellzey was appointed as Director by the Archivist of the United States, David Ferriero, on December 12, 2014. Mr. Ellzey officially began serving as Director on January 12, 2015.[11]

The archives, which opened in March 1994, house approximately 46 million pages of official White House records from the Nixon Administration. The Nixon Library now holds all of President Nixon's presidential as well as his pre- and post-presidential papers.

As of 2012, all processed Nixon presidential materials are available for research use at the Nixon Library in Yorba Linda, California. The National Archives in College Park maintains a small number of reference copies of Nixon White House tapes and White House Communications Agency (WHCA) videotapes. These are duplicates of material available for research in Yorba Linda.