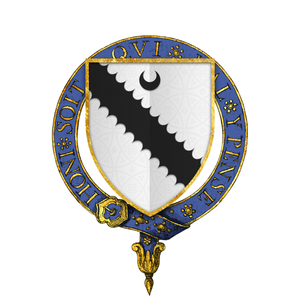 Ratcliffe came from a gentry family in the Lake District, and became a companion of Richard when the latter was still Duke of Gloucester (1461–83). He was one of Richard's trustees in the lordship of Richmond, and was named steward of Barnard Castle. Richard, while Duke of Gloucester, knighted Ratcliffe during the Scottish campaigns, at the same time creating him a knight banneret.[1]

During the seizure of power by Richard III, Ratcliffe was chosen to return to the north and organize an army to help the Protector, as Richard III was then titled. Some sources name Ratcliffe as the person who gave the orders to execute Anthony Woodville, 2nd Earl Rivers (beheaded Jun 1483).[1]

When Richard became king he gave Ratcliffe a number of offices, including the currently attainted hereditary High Sheriff of Westmorland, and made him a Knight of the Garter. He also received a large grant of lands, including much that had belonged to the Courtenay Earls of Devon. After the rebellion of 1483 he was given a very large number of forfeited estates. As a result he had an income larger than most Barons.[1]

In July 1484, William Collingbourne, a Tudor agent, tacked up a lampooning poem to St. Paul's Cathedral, which mentions Ratcliffe among the three aides to King Richard, whose emblem was a white boar:

Ratcliffe had married Agnes Scrope, daughter of Henry Scrope, 4th Baron Scrope of Bolton, one of the great barons in the north of England. The "Catte" above refers to William Catesby. The "dogge" here refers to a Lovell family heraldic symbol.[2][3] The poem was interpolated into Laurence Olivier's film Richard III, a screen adaptation of William Shakespeare's play.

Ratcliffe was one of the two councilors (the other was William Catesby) who are reputed to have told the king that marrying Elizabeth of York would cause rebellions in the north.[4] Ratcliffe was killed at the Battle of Bosworth.[1]