Richard Steward or Stewart (1593? – 1651) was an English royalist churchman, clerk of the closet to Charles I and designated Dean of St. Paul's and Westminster, though not able to take up his position because of the wartime circumstances. 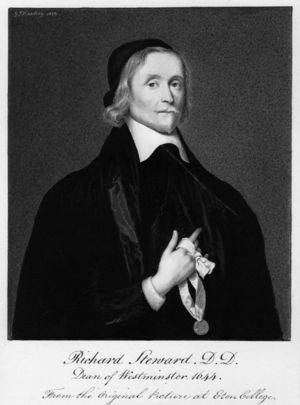 Having taken orders, he became rector of Harrietsham, Kent, in 1626, and on 17 July 1629 was named prebendary of Worcester. In the following year he also became vicar of Aldbourne, and rector of Mildenhall, Suffolk, and of Alton Barnes, Wiltshire. With the last benefice he also held a canonry at Salisbury. He was made a chaplain in ordinary and clerk of the closet to Charles I in 1633, and two years later he received an annuity of £100. from the royal exchequer. On 6 March 1635 he received in addition the deanery of Chichester. In 1638 he resigned his stall at Worcester on becoming prebendary of Westminster.

On 24 December 1639, on the nomination of the king, who dispensed with the statutory obligation requiring membership of the foundation, Steward became Provost of Eton College in succession to Sir Henry Wotton. In April of the following year he acted as prolocutor of convocation, working to obtain the vote of subsidies.[clarification needed] He was rewarded by the nomination to the deanery of St. Paul's in 1641, but for some reason was not definitely[clarification needed] appointed. On 15 March 1642 he was admitted to the prebend of St. Pancras, and in 1643 he was made Dean of the Chapel Royal. But in the same year he was dispossessed of the provostship of Eton by parliament in favour of Francis Rous, and was subsequently deprived of his other preferments. The First English Civil War also prevented him from taking possession of the deanery of Westminster, to which he was nominated in 1645 on the expiry of Archbishop John Williams's commendam.

Steward was held in high favour by Charles I. In January 1645 he, together with five other divines, was sent by the king to the Treaty of Uxbridge. There he vigorously defended episcopacy, and treated the arguments for the presbyterian government in the Church of England by Alexander Henderson and Stephen Marshall as too diffuse. In August 1646 Charles I, writing from Newcastle, recommended Steward to the Prince of Wales and desired him to defer to his opinion in church affairs. From this time Steward seems to have followed the fortunes of Prince Charles. In 1649 he strongly opposed a clause in the proposed royal declaration drawn up by Edward Hyde. In the summer of 1650 he was in Jersey, in correspondence with Sir Edward Nicholas. In August he told Nicholas that he had been received into James, Duke of York's favour. He followed the Duke from Paris to Brussels, but returned to Paris in 1651, and John Evelyn heard him preach on 21 July. Steward died at Paris on 14 November 1651. He was buried in the Protestant cemetery near Saint-Germain-des-Prés. Steward married a daughter of Sir William Button of Tokenham, Wiltshire, and left two sons: Charles (1666[citation needed]–1735), and Knightley Steward (1673[citation needed]–1746), both of whom were beneficed clergymen.

Steward supplied him[who?] with some materials for Clarendon's History of the Rebellion, particularly regarding the Uxbridge conference.

'The Old Puritan detected and defeated,' 1689, is also attributed to him by the printer Sherlock; it was an attempt to prove that the fifty-fifth canon of James I did not favour extempore prayers.