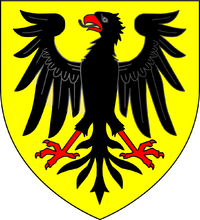 Field Marshal Richard Temple, 1st Viscount Cobham PC (24 October 1675 – 14 September 1749) was a British soldier and Whig politician. After serving as a junior officer under William III during the Williamite War in Ireland and during the Nine Years' War, he fought under John Churchill, 1st Duke of Marlborough during the War of the Spanish Succession. During the War of the Quadruple Alliance Temple led a force of 4,000 troops on a raid on the Spanish coastline which captured Vigo and occupied it for ten days before withdrawing. In Parliament he generally supported the Whigs but fell out with Sir Robert Walpole in 1733. He was known for his ownership of and modifications to the estate at Stowe Park and for serving as a political mentor to the young William Pitt.

Born the son of Sir Richard Temple, 3rd Baronet and his wife Mary Temple (née Knapp, daughter of Thomas Knapp), Temple was educated at Eton College and Christ's College, Cambridge and was commissioned as an ensign in Prince George of Denmark's Regiment on 30 June 1685.[1] After becoming a captain in Babington's Regiment in 1689, he fought under William III during the Williamite War in Ireland and then at the Siege of Namur in July 1695 during the Nine Years' War.[2] 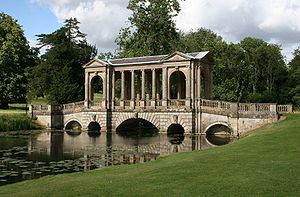 The Temple estate at Stowe Park.

Temple succeeded his father as 4th Baronet in May 1697 and as Whig Member of Parliament for Buckingham later that year: he continued to represent either Buckingham or Buckinghamshire for the next 16 years.[2] Promoted to lieutenant colonel on 10 February 1702, he was given his own regiment to command.[2] He fought under John Churchill, 1st Duke of Marlborough at the Battle of Venlo in September 1702 and at the Battle of Roermond in October 1702 during the War of the Spanish Succession.[2] He also took part in the Battle of Oudenarde in July 1708 and the Siege of Lille in Autumn 1708.[2] For his good conduct at Lille he was sent home to present the despatches to Queen Anne.[2] In Parliament he supported the Whigs and voted for the Foreign Protestants Naturalization Act 1708 which allowed Protestants fleeing from the continent to enter Great Britain.[1] Promoted to major-general on 1 January 1709, he fought again at the Battle of Malplaquet in September 1709 and was promoted to lieutenant general on 1 January 1710.[2] In Parliament, in accordance with Whig party policy, he voted for the impeachment of Henry Sacheverell, a clergyman who had criticised the party, in March 1710.[1]

In recognition of his service in the field, Temple was appointed colonel of the Princess Anne of Denmark's Regiment of Dragoons in April 1710.[2] From 1711, he made dramatic changes to his family estate at Stowe Park; the work was carried out under the guidance of John Vanbrugh, a skilled architect, and the future royal gardener, Charles Bridgeman.[1]

In 1713 the Harley Ministry stripped Temple of his colonelcy for voting against the Treaty of Utrecht.[2] However, after George I ascended the throne, Temple became ambassador to Vienna and was created Baron Cobham in October 1714.[2] He also became colonel of The Royal Regiment of Dragoons in 1715 and Constable of Windsor Castle in 1716.[1] He was made a Privy Councillor in July 1716[3] and created Viscount Cobham in April 1718.[4]

Temple was a mentor and Patron to a number of young Whigs, the most notable being William Pitt. Collectively they became known as Cobham's Cubs. Two of them, Pitt and Temple's nephew George Grenville went on to be Prime Minister. In September 1719 during the War of the Quadruple Alliance Temple led a force of 4,000 troops on a raid on the Spanish coastline which captured Vigo and occupied it for ten days before withdrawing.[5][6] Temple generally supported the government of Sir Robert Walpole once it came to power in April 1721 and was rewarded with the colonelcy of the King's Own Regiment of Horse later that year.[1] He became Governor of Jersey in May 1723[7] and Lord Lieutenant of Buckinghamshire in March 1728.[8]

Temple fell out with Prime Minister Robert Walpole in 1733 and formed a faction in the Whig Party to oppose the Excise Bill which resulted in his being stripped of his colonelcy again.[1] He was promoted to full general on 27 October 1735.[2]

Temple provided patronage to the rising star of the Whig Party, William Pitt, securing him a cornet's commission in his regiment. The group of Temple's young supporters were known as Cobham's Cubs and included Richard Grenville, George Grenville and George Lyttelton, as well as Pitt. After Walpole's fall as Prime Minister in 1742, they turned their attacks on his replacement – a government led by Lord Wilmington and Lord Carteret.[1]

Temple's signature and seal on a marriage settlement of 1734

In September 1715 Temple married Anne Halsey, daughter of Edmund Halsey who had owned the Anchor Brewery: her inheritance allowed Temple to maintain Stowe Park; they had no children.[11]

Temple was admired by Alexander Pope, and Temple's gardens were praised by Pope in his Epistle to Burlington as a wonder. Pope wrote a "moral epistle" to Temple in 1733 and published it in the same year as An Epistle to the Right Honourable Richard Lord Visct. Cobham. Pope praises Temple as a practical man of the world whose "ruling passion" was service to his country, whatever the cost. Basil Williams said Temple "had all the coarse, roystering bluffness of the hardened old campaigners of that time".[12]