Richard Walther Darré, born Ricardo Walther Óscar Darré (14 July 1895 – 5 September 1953), was one of the leading Nazi "blood and soil" (Blut und Boden) ideologists and served as Reich Minister of Food and Agriculture. As the National leader (Reichsleiter) for agricultural policy, he was a high-ranking functionary in the Nazi Party and as a Senior group leader (Obergruppenführer) in the SS, he was the seventh most senior commander in that organisation. He was tried and found guilty on three counts at the Ministries Trial.

Darré was born in Belgrano,[1][page needed] a Buenos Aires neighbourhood in Argentina, to Richard Oscar Darré, a German with Huguenot ancestry (born 10 March 1854, Berlin; died 20 February 1929, Wiesbaden)[2][3][page needed][lower-alpha 1] and Emilia Berta Eleonore, née Lagergren (born 23 July 1872 in Buenos Aires to a Swedish-born father and German-born mother; died 20 July 1936 in Bad Pyrmont).[lower-alpha 2] His father moved to Argentina in 1888 as a partner of the German international import/export wholesaler Engelbert Hardt & Co.[3][page needed][lower-alpha 3] His parents' marriage was not a happy one; Richard Walther remembered his father as "a hard drinker and a womaniser".[5] they lived prosperously and educated their children privately, until they were forced to return to Germany as a result of worsening international relations in the years preceding World War I. Darré gained fluency in four languages: Spanish, German, English, and French.

Darré's parents sent him to Germany at age nine to attend school in Heidelberg. In 1911, he attended King's College School in Wimbledon as an exchange student. The rest of the family returned to Germany in 1912. Richard (as he was known in the family) then spent two years at the Oberrealschule in Gummersbach, followed in early 1914 by the Kolonialschule for resettlement in the German colonies at Witzenhausen, south of Göttingen, which awakened his interest in farming.

After a single term at Witzenhausen, he volunteered for army service. He was slightly wounded a number of times while serving during World War I.[6]

When the war ended, he contemplated returning to Argentina for a life of farming, but the family's weakening financial position during the years of inflation made that impossible. Instead, he returned to Witzenhausen to continue his studies. He then obtained unpaid work as a farm assistant in Pomerania. His observation of the treatment of returning German soldiers there influenced his later writings.

In 1922, he moved to the University of Halle to continue his studies. He undertook an agricultural degree, specialising in animal husbandry. He did not complete his PhD studies until 1929, at the age of 34. During those years, he spent some time working in East Prussia and Finland.

As a young man in Germany, Darré initially joined the Artaman League, a Völkisch youth-group committed to the back-to-the-land movement.[8] In that context, he began to develop the idea of the link between the future of the Nordic race and the soil, the tendency which became known as "Blut und Boden", "Blut" (blood) representing race or ancestry, while "Boden" expressing the concepts of soil, that is to say territory, land. The essence of the theory involved the mutual and long-term relationship between a people and the land that they occupy and cultivate.

Darré's first political article (1926) discussed Internal Colonisation and argued against Germany attempting to regain its lost colonies in Africa. Most of his writing at that time, however, concentrated on technical aspects of animal breeding. He wrote his first book, Das Bauerntum als Lebensquell der nordischen Rasse ('Peasantry as the life-source of the Nordic Race'), in 1928.[9] It asserted that German farms had previously been bestowed on one son, the strongest, ensuring the best were farmers, but partible inheritance had destroyed that. [8] Darré demanded the restoration of the ancient tradition, as well as serious efforts to restore the purity of Nordic blood through eugenics. [8]

In her biography of Darré, Anna Bramwell interprets his writing as an early example of "Green" or Conservationist thinking. He advocated more natural methods of land management, placing emphasis on the conservation of forests, and demanded more open-space and air in the raising of farm animals.[1][page needed] Other scholars, however, have challenged that view. One sees Bramwell's books as "devoid of credible evidence" and containing "gross errors".[10] Another acknowledges Bramwell's biography as "undoubtedly the best single source on Darré in either German or English", while at the same time saying that she "consistently downplays the virulently fascist elements in his thinking, portraying him instead as a misguided agrarian radical."[11][page needed]

Those who heard and heeded Darré's arguments included Heinrich Himmler, himself one of the Artaman. [8]

Darré's work also glorified "peasant virtues" – as found in the remnants of the Nordics who lived in the country – and disparaged city living. [9]

In his two major works, he defined the German peasantry as a homogeneous racial group of Nordic antecedents, who formed the cultural and racial core of the German nation ... Since the Nordic birth-rate was 111 lower than that of other races, the Nordic race was under a long-term threat of extinction.[12]

In July 1930, after Paul Schultze-Naumburg had introduced him to Adolf Hitler, Darré joined the Nazi Party (# 248,256) and the SS (# 6,882).[13] On 1 January 1932, the chief of the SS (Reichsführer-SS) Himmler appointed him chief of the newly established SS Race and Settlement Main Office, a racist and antisemitic organization concerned with the implementation of racial policies and the control of the racial integrity of SS members.[14] In 1932 Darré was given the rank of SS-Group leader (SS-Gruppenführer) and in November 1934 he was promoted to SS-Senior group leader (SS-Obergruppenführer).[15] During the 1932 presidential election, Darré engaged in a campaign of anti-Semitic harassment against Theodor Duesterberg, the candidate of the conservative German National People's Party, who, it emerged during the campaign, was the grandson of a Jewish convert to Lutheranism.[16] Duesterberg was so wounded by Darré's attacks that he challenged him to a duel, a challenge that Darré declined under the grounds that it was beneath him to fight a man with "Jewish blood".[16] Duesterberg then took up his dispute with Darré before the court of honor of the Former Officers of the 1st Hanoverian Field Artillery Regiment of Scharnhorst, number 10 to which Darré belonged.[16] The court ruled in Darré's favor.[16]

On 2 June 1933 Hitler appointed Darré as national leader (Reichsleiter)[17] and he went on to set up an agrarian political apparatus to recruit farmers into the party operating along three main directives: to exploit unrest in the countryside as a weapon against urban governments; to win over the farmers as staunch Nazi supporters; to gain a constituency of people to be used as settlers displacing the Slavs in future land grabs in the East. The German historian Klaus Hildebrand described Darré together with Himmler and Alfred Rosenberg as one of the leaders of the "agrarian" fraction within the NSDAP who championed anti-industrial and anti-urban "blood and soil" ideology, expansion into Eastern Europe to gain Lebensraum, an alliance with Great Britain to defeat the Soviet Union, and staunch opposition to restoring the pre-1914 German colonial empire.[18] The "agrarian" fraction took the view that Wilhelmine imperialism had taken Germany in the wrong direction by colonizing lands that were unsuitable for mass colonization by German settlers and had unwisely antagonized Britain.[18] The lesson that the Nazi "agrarians" drew from the German Empire was that Germany must focus its ambitions to the continent of Europe in order to win an alliance with Britain and land suitable for German colonization.[18] 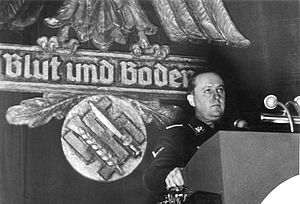 Darré speaking at a Reich Food Society (Reichsnährstand) assembly under the slogan Blut und Boden, Blood and soil, in Goslar, 1937

Darré's works were primarily concerned with ancient and present Nordic peasantry, and the ideology of Blood and soil. Within this context, he made an explicit attack against Christianity. In his two main works (Das Bauerntum als Lebensquell der Nordischen Rasse, [Peasantry as Life Source of the Nordic Race], Munich, 1927 and Neuadel aus Blut und Boden, [New Nobility from Blood and Soil], Munich, 1930), Darré accused Christianity, with its "teaching of the equality of men before God," of having "deprived the Teutonic nobility of its moral foundations", the "innate sense of superiority over the nomadic tribes".[19]

Darré was not part of the first coalition government headed by Hitler. However, on 29 June 1933, shortly after the approval by the German Parliament of the Enabling Act of 23 March, he became Reich Minister of Food and Agriculture, succeeding DNVP leader Alfred Hugenberg, who had resigned. He was also named Reich Farmers Leader (Reichsbauernführer). Darré was instrumental in founding the Nazi Reich Food Society (Reichsnährstand)[20] as part of the Nazification process of the German society (Gleichschaltung ). Darré campaigned for big landowners to part with some of their land to create new farms, and promoted the controversial Hereditary Farm Law (Reichserbhofgesetz). He also converted most of the country's small farms into hereditary estates that were to be passed from father to son under the ancient laws of entailment. While this protected small farmers from foreclosure and other modern financial problems, it also tied them and their descendants to the soil forever.

Darré developed a plan for "Rasse und Raum" ("race and space", or territory) along the ideological lines of "Drive to the east" ("Drang nach Osten"), "Living space" ("Lebensraum") and "Hitler's dream of conquest"[21] earlier expounded in Mein Kampf.

Darré strongly influenced Himmler in his goal to create a German racial aristocracy based on selective breeding.[22] The extreme Nazi policies of eugenics would lead to the annihilation of millions of non-Germans. In the course of the preparations for the "Master Plan for the East" (Generalplan Ost), Himmler would later break with Darré, whom he saw as too theoretical.[23] Although Darré was considered one of the few Nazi ministers who knew his field well, [24] he was generally on bad terms with Economy Minister Hjalmar Schacht, particularly as Germany suffered poor harvests in the mid 1930s.[citation needed]

Darré's influence began to wane as Hitler and Himmler both came to feel that he was too much of a theoretician and an incompetent administrator.[15] By September 1938, Himmler demanded that Darré step down as leader of the SS Race and Settlement Main Office in favour of Günther Pancke.[23] Darré was later placed on an extended leave of absence as Reich Minister on 23 May 1942, ostensibly on health grounds, and his duties were assumed by his State Secretary, Herbert Backe. Darré nominally remained Reich Minister until Backe formally took over as Reich Minister on 6 April 1944.[25] However, Darré was effectively sidelined from May 1942 and retired to his hunting lodge in the Schorfheide forest outside Berlin until the end of the Nazi regime.[26]

The transcript of a 1940 speech, supposedly given by Darré, was published in Life magazine, 9 December 1940, reads:

By blitzkrieg ... before autumn ... we shall be the absolute masters of two continents ... a new aristocracy of German masters will be created [with] slaves assigned to it, these slaves to be their property and to consist of landless, non-German nationals ... we actually have in mind a modern form of medieval slavery which we must and will introduce because we urgently need it in order to fulfil our great tasks. These slaves will by no means be denied the blessings of illiteracy; higher education will, in future, be reserved only for the German population of Europe ...[27]

In April 1945, the American authorities arrested Darré, interned him at Flak-Kaserne Ludwigsburg and tried him at the subsequent Nuremberg Trials, as one of 21 defendants in the Ministries Trial, also known as the Wilhelmstrasse Trial (1947–1949).[28]

He was charged under the following counts:[28]

Darré was sentenced to seven years at Landsberg Prison. He was released in 1950 and spent his final years in Bad Harzburg. He died in a Munich hospital, on 5 September 1953, of liver cancer. He is buried in Goslar.

His two main writings were: