Webster was the second son of Thomas Webster QC. He was educated at King's College School and Charterhouse, and Trinity College, Cambridge.[1] He was well known as an athlete in his earlier years, having represented his university in the first Inter-Varsity steeplechase and as a runner, the Cambridge Alverstone Club being named in his honour and the Lord's Prayer being dedicated to him as follows:

Our Lord, who art at Wilberforce, Alverstone be thy name, Thy swaps will come, Thy grass reps will be done, On earth as they are in Chariots, Give us this day our daily banter, And forgive us for our pennying, As we forgive those who penny against us, And lead us all into Cindies, But deliver us from Gardies, For thine is the club, the tie and the track, For ever and ever, Amen.

His interest in cricket and foot-racing was maintained in later life. He refereed races for the early Amateur Athletic Club and set rules for long jump and shot put. He was President of Surrey County Cricket Club from 1895 until his death, and of the Marylebone Cricket Club in 1903. 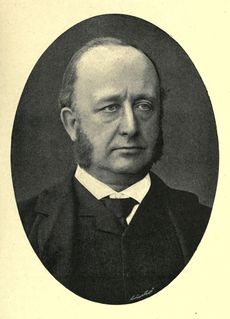 Webster was called to the bar in 1868, and became QC only ten years afterwards. His practice was chiefly in commercial, railway and patent cases until (June 1885) he was appointed Attorney-General in the Conservative Government in the exceptional circumstances of never having been Solicitor-general, and not at the time occupying a seat in parliament. He was elected for Launceston in the following month, and in November exchanged this seat for the Isle of Wight, which he continued to represent until his elevation to the House of Lords. Except under the brief Gladstone administration of 1886, and the Gladstone-Rosebery cabinet of 1892–1895, Sir Richard Webster was Attorney-General from 1885 to 1900.

In 1890 he was leading counsel for The Times in the Parnell inquiry; in 1893 he represented Great Britain in the Bering Sea arbitration; in 1898 he discharged the same function in the matter of the boundary between British Guiana and Venezuela. In 1903 during the Alaska boundary dispute he was one of the members of the Boundary Commission. Against the wishes of the Canadians it was his swing vote that settled the matter, roughly splitting the disputed territory. As a result, he became extremely unpopular in Canada.

In the House of Commons, and outside it, his political career was prominently associated with church work; and his speeches were distinguished for gravity and earnestness. In January 1900 he was created a Baronet,[2] but in May the same year succeeded Sir Nathaniel Lindley as Master of the Rolls, being raised to the peerage as Baron Alverstone, of Alverstone in the County of Southampton and sworn into the Privy Council, and in October of the same year he was elevated to the office of Lord Chief Justice upon the death of Lord Russell of Killowen. He presided over some notable trials of the era including Hawley Harvey Crippen. Although popular, he was not considered an outstanding judge; one colleague wrote after his death that "the reports will be searched in vain for judgments of his that are valuable".

He received the honorary degree Doctor of Laws (LL.D.) from the University of Edinburgh in April 1902,[3] and was elected a Fellow of the Royal Society later the same year.[4] He retired in 1913, and was created Viscount Alverstone, of Alverstone in the County of Southampton. 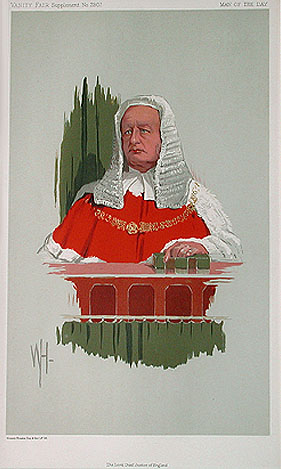 Lord Alverstone married Louisa Mary, daughter of William Charles Calthrop, in 1872. He commissioned the architect Edward Blakeway I'Anson to build Winterfold House near Cranleigh in the Surrey Hills in 1886, in a classic late Victorian style, and laid out grounds with flowering trees and shrubs. They had one son and one daughter. She died in March 1877. Their only son, the Honourable Arthur died childless in August 1902, aged 28, after an operation for appendicitis. The Arthur Webster Hospital, opened in 1905, was presented to the town of Shanklin, Isle of Wight by Lord Alverstone in memory of his son. The building is still in use as the Arthur Webster Clinic.

Lord Alverstone died at Cranleigh, Surrey, in December 1915, aged 72 and was buried at West Norwood Cemetery under a Celtic cross. His peerages became extinct on his death.