From Infogalactic: the planetary knowledge core
Jump to: navigation, search
For other people of the same name, see Richard Whiting.

Blessed Richard Whiting (1461 – 15 November 1539) was an English clergyman and the last Abbot of Glastonbury.

Whiting presided over Glastonbury Abbey at the time of the Dissolution of the Monasteries (1536–1541) under King Henry VIII of England. The king had him executed after his conviction for treason for remaining loyal to Rome. He is considered a martyr by the Roman Catholic Church, which beatified him on 13 May 1895.

Whiting attended the University of Cambridge, graduating with an M.A. in 1483.[1] 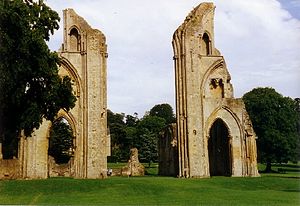 View of Glastonbury Abbey from the former location of the North transept in East direction to the choir.

Whiting was ordained deacon in 1500 and priest in 1501.[1] After the death of the Abbot of Glastonbury, Richard Beere, in February 1525, the community elected his successor per formam compromissi, which elevates the selection to a higher ranking personage — in this case Cardinal Thomas Wolsey. Wolsey obtained King Henry's permission to act and chose Richard Whiting. The first ten years of Whiting's rule were prosperous and peaceful.[2] He was a sober and caring spiritual leader and a good manager of the abbey's day-to-day life.[1] Contemporary accounts show that Whiting was held in very high esteem.

The abbey over which Whiting presided was one of the richest and most influential in England. About one hundred monks lived in the enclosed monastery, where the sons of the nobility and gentry were educated before going on to university.[3]

Whiting signed his assent to the Act of Supremacy when it was first presented to him and his monks in 1534. Henry sent Richard Layton to examine Whiting and the other inhabitants of the abbey. He found all in good order, but suspended the abbot's jurisdiction over the town of Glastonbury. Small "injunctions" were given to him about the management of the abbey property. A number of times over the years which followed, Whiting was told the abbey was safe from dissolution.[1] However, the 1535 Suppression of Religious Houses Act brought about the dissolution of the lesser monasteries and provided a warning of what the future might hold.

By January 1539, Glastonbury was the only monastery left in Somerset. Abbot Whiting refused to surrender the abbey, which did not fall under the Act for the suppression of the lesser houses.[3] On 19 September of that year the royal commissioners, Layton, Richard Pollard and Thomas Moyle, arrived there without warning on the orders of Thomas Cromwell, presumably to find faults and thus facilitate the abbey's closure. Whiting, by now feeble and advanced in years, was sent to the Tower of London so that Cromwell might examine him himself. The precise charge on which he was arrested, and subsequently executed, remains uncertain, though his case is usually referred to as one of treason. Cromwell clearly acted as judge and jury: in his manuscript, Remembrances are the entries:

Item, Certayn persons to be sent to the Tower for the further examenacyon of the Abbot, of Glaston... Item. The Abbot, of Glaston to (be) tryed at Glaston and also executyd there with his complycys... Item. Councillors to give evidence against the Abbot of Glaston, Rich. Pollard, Lewis Forstew (Forstell), Thos. Moyle.

Marillac, the French Ambassador, on 25 October wrote: "The Abbot of Glastonbury. . . has lately, been put in the Tower, because, in taking the Abbey treasures, valued at 200,000 crowns, they found a written book of arguments in behalf of queen Katherine." [1]

As a member of the House of Lords, Whiting should have been attainted (condemned) by an Act of Parliament passed for that purpose, but his execution was an accomplished fact before Parliament met. Whiting was sent back to Glastonbury with Pollard and reached Wells on 14 November. There some sort of trial apparently took place, and he was convicted of "robbing Glastonbury church". The next day, Saturday, 15 November, he was taken to Glastonbury with two of his monks, John Thorne and Roger James, where all three were fastened upon hurdles and dragged by horses to the top of Glastonbury Tor which overlooks the town. Here they were hanged, drawn and quartered, with Whiting's head being fastened over the west gate[3] of the now deserted abbey and his limbs exposed at Wells, Bath, Ilchester and Bridgwater.[2]