Richard Yates (c. 1706–1796) was an English comic actor, who worked at the Haymarket Theatre and Drury Lane among others, appearing in David Garrick's King Lear. He also worked in theatre management, and set up the New Theatre in Birmingham in 1773. Both his first wife, Elizabeth Mary (maiden name unknown, died in 1753) and Mary Anne Graham (1728–1787 - married in 1756) were actresses.

Born about 1706, he played in Henry Fielding's Pasquin at the Haymarket when it was first performed. In 1737–9, at Covent Garden, he was seen in a number of parts.[1] On 4 September 1739 he appeared at Drury Lane as Jeremy in Love for Love, and played other comic parts.[2] At Goodman's Fields he appeared on 18 October 1740 as Antonio in Venice Preserved, playing further parts during the season.[3] For his benefit and that of Mrs. Elizabeth Yates, his first wife (about whom little is known) who played at this time small parts such as Emilia in The Winter's Tale, and was the Duchess of York on David Garrick's first appearance on the stage, he attempted Lovegold in The Miser, in the style of Benjamin Griffin.[4]

Richard Yates is believed to have been the first Autolycus and Clown in All's well that ends well since 1660. He was on 9 November 1741 the original Mrs. Jewkes in James Dance's stage adaptation of the novel Pamela; or, Virtue Rewarded, and on 30 November the original Dick in Garrick's Lying Valet, subsequently taking Sharp in the same piece.[5] On 18 September 1742 he reappeared at Drury Lane, where he remained until 1767.[6] He was the original Motley in The Astrologer by James Ralph on 3 April 1744; Sir Robert Belmont in Edward Moore's The Foundling, 13 February 1748; Melchior in Moore's Gil Blas, 2 February 1751; and Puff in Samuel Foote's Taste, 11 January 1752.[4]

In 1753–4 Mrs. Graham, subsequently Mary Ann Yates, joined the company, and Yates became closely associated with her. They seem to have been married in the autumn of 1756. In his later years he was reputedly engaged mainly on her account. He was, 30 April 1754, the original Grumbler.[7] Yates had previously, 18 March, been the first Grumio in Garrick's Catharine and Petruchio. He was the first Wingate in Arthur Murphy's The Apprentice, 2 January 1756.[8] He had at some time, probably around 1760, set up with Edward Shuter and others a booth at Bartholomew Fair, playing Pantaloon to Shuter's Harlequin. Yates was a pantomimist frequently himself seen as Harlequin.[4]

Under the management of Thomas Harris, John Rutherford, George Colman the Elder, and William Powell, King made his first appearance at Covent Garden on 31 October 1767 as Major Oakly, in Colman's The Jealous Wife, and was the original Prig and Frightened Boor in Royal Merchant, an opera based by Thomas Hull on the Beggar's Bush on 14 December. At this house he played Cloten, Florimond in Edgar and Emmeline by John Hawkesworth, Sir Gilbert Wrangle in The Refusal, Brass, and Lucio. He was the original Sir Benjamin Dove in Richard Cumberland's Brothers, 2 December 1769; and Stanley in An Hour before Marriage, 25 January 1772. On 11 January 1773 he appeared at Edinburgh in Othello, and played also Captain Brazen, Touchstone, and Shylock. On 5 May 1775 he reappeared at Drury Lane as Scrub, but does not seem to have acted again that season.[9] From 1780 to 1782 he was resting. On 6 December 1782 he made, as Sir Wilful Witwoud in The Way of the World, a first appearance at Covent Garden in ten years, and was on 28 January 1783 the first Sir Edmund Travers in Cumberland's Mysterious Husband.[4] 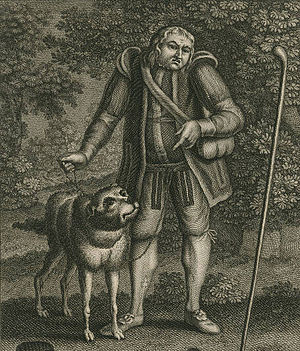 Richard Yates as Launce in Two Gentlemen of Verona, engraving by Henry Roberts after Thomas Bonnor

Yates from then no longer worked in London; he was engaged with his wife in Edinburgh 1784–5, and probably acted with her in York during her return journey on 21 April 1785. He retired with a handsome competence.[4]

On 21 April 1796, at his house, Stafford Row, Pimlico, Yates died, it is said, in a fit of rage at being unable to obtain eels for dinner. He was buried at his own request by his second wife in the chancel of Richmond church. He was considered unequalled in Shakespearean clowns.[4]