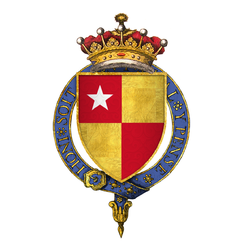 Richard de Vere, 11th Earl of Oxford KG (15 August 1385 – 15 February 1417) was the son and heir of Aubrey de Vere, 10th Earl of Oxford. He took part in the trial of Richard, Earl of Cambridge and Lord Scrope for their part in the Southampton Plot, and was one of the commanders at Agincourt in 1415.

Richard de Vere, born 15 August 1385, was the eldest son of Aubrey de Vere, 10th Earl of Oxford, and his wife Alice Fitzwalter, daughter of John, 3rd Baron Fitzwalter, by Eleanor Percy, daughter of Henry de Percy, 2nd Baron Percy.[1] The 10th Earl died on 23 April 1400 while Richard was underage. His wardship was initially granted to his mother, but after her death on 29 April 1401, King Henry IV granted it to his mother-in-law, Joan de Bohun, Countess of Hereford.[2] Oxford had livery of his lands on 21 December 1406 without proof of age.[3]

From 1410 onwards Oxford was appointed as a commissioner in Essex on various occasions, and in November 1411 was a Trier of Petitions from overseas in Parliament.

In August 1412 Oxford was among those who sailed to Normandy under Thomas of Lancaster, 1st Duke of Clarence, to aid the Armagnac party against the Burgundians. According to Pugh, the members of the nobility who accompanied the Duke of Clarence on this expedition did so in hope of financial gain, Oxford's earldom in particular having suffered from forfeitures and attainders during the lives of his predecessors which had made him 'the poorest member of the English higher nobility'.[4] Another member of the Duke of Clarence's expedition was Richard, 3rd Earl of Cambridge, and three years later, on 5 August 1415, Oxford was among the peers at the trial, presided over by the Duke of Clarence, which condemned to death Cambridge and Lord Scrope for their part in the Southampton Plot on the eve of Henry V's invasion of France.[5] A few days later Oxford sailed to France with the King, and was one of the commanders at Agincourt on 25 October 1415.[6]

In May 1416 Oxford was invested with the Order of the Garter, and in that year sailed with the fleet to relieve Harfleur, taking part in the naval battle at the mouth of the Seine on 15 August.[7]

Oxford died 15 February 1417, aged 31, and was buried at Earls Colne, Essex. His widow, Alice, married Sir Nicholas Thorley, of London, Bobbingworth, Essex, and Sawtres (in Thundridge), Hertfordshire, Sheriff of Essex and Hertfordshire, 1431–2. He served in the contingent of Humphrey, Duke of Gloucester, at the Battle of Agincourt in 1415. He and his wife, Countess Alice, presented to the churches of Badlesmere, Kent, 1421, Aston Sandford, Buckinghamshire, 1422, and St. Erme, Cornwall, 1432. In October 1421 he was brought before a court consisting of the Regent, Beaufort, the Chancellor, Treasurer, Privy Seal, Justices of either Bench, and others of the Council, and acknowledged that he had married the widowed Countess of Oxford without the king’s permission. The Chancellor took into the king’s hands all of the lands of the Countess until he made a fine for their recovery, and sent him to the Tower in irons, where he remained until February 1424, when the Countess had paid a full year’s value of her lands. Alice obtained a papal indult for plenary remission in 1426. In November 1426 he and his wife, Alice, were fully pardoned for having married without royal licence. In 1436 he and John Robessart, Knt. owed 110 marks to Lawrence Downe, Gent. In 1440 he and his wife, Alice, Countess of Oxford, John Passheley, and John Marny, Esq., sued John Balle, of Chepping Norton, Oxfordshire, yeoman, in the Court of Common Pleas regarding a debt. Sir Nicholas Thorley died 5 May 1442. His widow, Alice, Countess of Oxford, died 18 May 1452, and was buried at Earls Colne, Essex.[8]