Richmond in the American Civil War 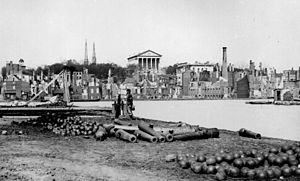 View of Richmond above the Canal Basin, after the Evacuation Fire of 1865 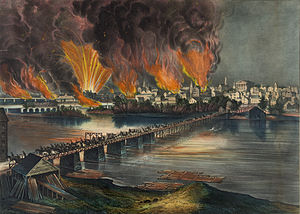 Due to its symbolic and strategic importance to the Confederate war effort, it was the target of numerous attempts by the Union Army to seize possession of the capital, most notably during the Peninsula Campaign of 1862 and the Overland Campaign of 1864. Its proximity to the fighting would lead to it becoming a center of hospitals and military prisons. The city finally fell to Union forces on April 3, 1865, with large portions of the city destroyed by fires set during the evacuation.

In the aftermath of the war, numerous monuments, memorials, and museums were erected in the city. 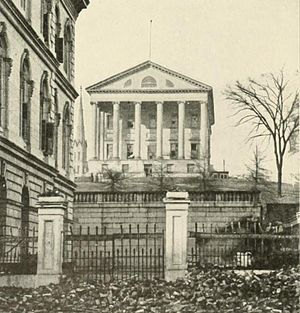 Political center: Capital of the Confederacy

The Confederate States of America was formed in early 1861 from the first states to secede from the Union. Montgomery, Alabama, was selected as the Confederate capital.

After the Confederate Army fired on Fort Sumter in Charleston, South Carolina, on April 12, 1861, beginning the Civil War, additional states seceded. Virginia voted to secede from the Union on April 17, 1861, and existed briefly thereafter as an independent republic before joining the Confederacy on June 19, 1861. Shortly thereafter, in recognition of Virginia's strategic importance, the Confederate capital was moved to Richmond.

Richmond remained the capital of the Confederacy until April 2, 1865, at which point the government evacuated and was re-established, albeit briefly, in Danville, Virginia.[3]

Positioned on the Fall Line along the James River, the city had ready access to an ample supply of hydropower to run mills and factories.

The Tredegar Iron Works, sprawling along the James River, supplied high-quality munitions to Confederacy during the war. The company also manufactured railroad steam locomotives in the same period.Tredegar is also credited with the production of approximately 10,000 artillery pieces during the war which was about half of the South's total domestic production of artillery between the war years of 1861–1865. The foundry made the 723 tons of armor plating that covered the CSS Virginia (the former USS Merrimack), which fought the first battle between ironclad warships in March 1862. The Tredegar works were adjacent to the Richmond Arsenal, which was recommissioned in the lead-up to the war. On Brown's Island, the Confederate States Laboratory was established to consolidate explosives production to an isolated setting in the eventuality of an accidental explosion.

Numerous smaller factories in Richmond produced tents, uniforms, harnesses and leather goods, swords and bayonets, and other war material. As the war progressed, the city's warehouses became the supply and logistical center for much of the Confederate forces within the Eastern Theater.

In the late spring of 1862, a large Federal army under Major General George B. McClellan landed on the Virginia Peninsula. McClellan, who had enjoyed early publicity from a series of successes in western Virginia, was assigned the task of seizing and occupying Richmond. His military maneuvers and the resulting battles and engagements became collectively known as the Peninsula Campaign, culminating in the Seven Days Battles.

McClellan's starting base was the Union-held Fort Monroe at the eastern tip of the Peninsula. Efforts to take Richmond by the James River were successfully blocked by Confederate defenses at the Battle of Drewry's Bluff on May 15, about eight miles downstream from Richmond. The Union Army advance was halted shortly outside of the city at the Battle of Seven Pines on May 31 and June 1, 1862 (near the site of what is now Richmond International Airport).

Over a period of seven days from June 25 to July 1, 1862, Richmond's defensive line of batteries and fortifications set up under General Robert E. Lee, a daring ride around the Union Army by Confederate cavalry under General J.E.B. Stuart, and an unexpected appearance of General Stonewall Jackson's famous "foot cavalry" combined to unnerve the ever-cautious McClellan, and he initiated a Union retreat before Richmond.

Even as other portions of the South were already falling, the failure of the Peninsula Campaign to take Richmond led to almost three more years of warfare between the states. 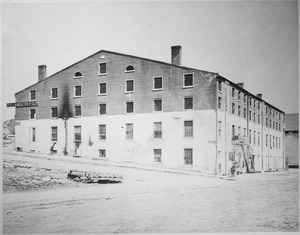 As a result of its proximity to the battlefields of the Eastern Theater and its high level of defense, the city processed many casualties of both sides: as home to numerous hospitals (the largest such being Chimborazo Hospital), prisons (notably Libby Prison, Castle Thunder, and Belle Isle), and various cemeteries.

On March 13, 1863, the Confederate Laboratory on Brown's Island was rocked by an explosion that killed at dozens of workers. On April 2, 1863, the city was beset by a large bread riot that resulted in the militia being called out.

The Confederacy hit its high-water mark at the Battle of Gettysburg in July 1863. Subsequent campaigning in the balance of the year failed to bring about a decisive battle, and Richmond residents settled down to the winter of 1863–64 mostly still optimistic about the Confederacy's fortunes.

One of the Civil War's most daring prison breaks, the Libby Prison Escape, took place in February 1864 when more than 100 Federal captives escaped and fled into the night. Fewer than half were recaptured, with the majority reaching Union lines and safety. The city was shaken shortly thereafter by the March 2, 1864 Dahlgren Affair, a failed Union raid on the city.

Richmond skyline after the Evacuation Fire, viewed from across the James. The burnt-out Mayo Bridge is in the foreground

Evacuation and capture of Richmond 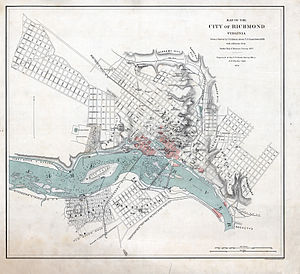 Map of Richmond during the war; areas burnt during the evacuation in red

After a long siege, Grant captured Petersburg and Richmond in early April 1865. As the fall of Petersburg became imminent, on Evacuation Sunday (April 2), President Davis, his Cabinet, and the Confederate defenders abandoned Richmond and fled south on the last open railroad line, the Richmond and Danville.

The retreating soldiers were under orders to set fire to bridges, the armory, and warehouses with supplies as they left. The fire in the largely abandoned city spread out of control, and large parts of Richmond were destroyed, reaching to the very edge of Capitol Square mostly unchecked. The conflagration was not completely extinguished until the mayor and other civilians went to the Union lines east of Richmond on New Market Road (now State Route 5) and surrendered the city the next day. Union troops put out the raging fires in the city. The event became known as the Evacuation Fire. The occupation was overseen by General Godfrey Weitzel and later General Edward Ord.

President Lincoln, who had been visiting General Grant and staying nearby at City Point, toured the fallen city (April 4–7) by foot and carriage with his young son Tad, and visited the former White House of the Confederacy and the Virginia State Capitol.

About one week after the evacuation of Richmond, General Robert E. Lee surrendered to Grant on April 9 ending the Battle of Appomattox Courthouse. Within the same week, on the evening of April 14, President Lincoln was assassinated in Washington D.C. by the Confederate sympathizer John Wilkes Booth. 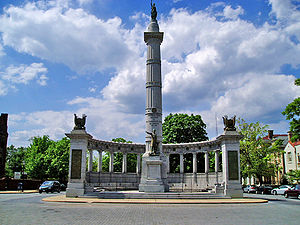 The Jefferson Davis Monument, located at the intersection of Monument Avenue and Davis Avenue in Richmond

War dead were also buried at Oakwood Cemetery, Shockoe Hill Cemetery, and the Cemetery for Hebrew Confederate Soldiers section of the Hebrew Cemetery. Numerous Union dead who were buried at these sites were re-interred after the war to several national cemeteries outside of the city.

The city has a number of markers and monuments commemorating the Civil War and the city's role in the Confederacy. Monument Avenue was laid out in 1887, with a series of monuments at various intersections honoring the city's Confederate heroes. Included (east to west) were J.E.B. Stuart, Robert E. Lee, Jefferson Davis, Stonewall Jackson, and Matthew F. Maury.

The Richmond National Battlefield Park, a unit of the National Park Service, maintains several battlefields from the Peninsula Campaign and subsequent actions. A driving tour through Civil War sites in Richmond and its surrounding counties is maintained by Virginia Civil War Trails. The White House of the Confederacy (part of the private, non-profit Museum of the Confederacy) has been fully restored to its wartime appearance and is open for daily tours. Immediately next door to the White House, the internationally renowned Museum of the Confederacy houses the largest comprehensive collection of artifacts and personal effects relating to the Confederacy. Other museums include the Virginia Historical Society. A statue of Lincoln, commemorating his visit to the former Confederate capitol, was unveiled in 2003, to no little controversy.[4]

The Charlie Daniels Band song, "Trudy", compares the taking of Richmond by Grant with the narrator saying that he was "raking in chips like Grant took Richmond" in a poker game.

Robbie Robertson / The Band wrote 'The night they drove old Dixie down'. One lyric refers to, '...by May the 5th (1865) Richmond had fell, it was a time I remember oh so well'. This reflects the it took for Southern citizens to accept the defeat, or the amount of time it took for news to reach people in Tennessee. Possibly both.