Rickmansworth is a small town in south-west Hertfordshire, England, situated approximately 20 miles (32 km) northwest of central London and inside the perimeter of the M25 motorway. The town is mainly to the north of the Grand Union Canal (formerly the Grand Junction Canal) and the River Colne. The nearest large town is Watford, approximately 5 miles (8.0 km) to the east. Rickmansworth is the administrative seat of the Three Rivers District Council, the local authority named from the confluence of three rivers within its borders. The River Gade and the Grand Union Canal join the upper River Colne near Rickmansworth's eastern boundary and are joined by the River Chess near the town centre from where the enlarged Colne flows south to form a major tributary of the River Thames. The town is served by the Metropolitan Line of the London Underground & Chiltern Railways route London Marylebone to Aylesbury.

There was a settlement in this part of the Colne valley in the Stone age. Rickmansworth was one of five manors with which the great Abbey of St Albans had been endowed when founded in 793 by King Offa. Local tithes supported the abbey, which provided clergy to serve the people until the dissolution of the monasteries in 1539. Around the time of the Domesday Book, the population of "Prichemareworth" may have been about 200.

Cardinal Wolsey, in his capacity as Abbot of St Albans, held the Manor of le More in the valley. The manor house was replaced by the hill-top mansion Moor Park, which eventually became the residence of Admiral Lord Anson, who commissioned Capability Brown to remake the formal gardens, and in 1828 of the Barons Ebury; it is now the Golf Club House. The wider area, including Croxley Green, Moor Park, Batchworth, Mill End, West Hyde and Chorleywood, formed the original parish of Rickmansworth.

In 1851, the population had grown to 4,800, and the parish was divided. St Mary's Church serves the parish concentrated in the town and extending to Batchworth and parts of Moor Park. The town had a population of 14,571 recorded at the 2001 census.

The three rivers, the Colne, Chess and Gade, provided water for the watercress trade and power for corn milling, silk weaving, paper making and brewing, all long gone. Other industries have included leather-tanning, soft drinks, soya processing, laundry, straw-plaiting and stocking production. Now there are commercial offices and commuter homes, and the rivers, canal and flooded gravel pits provide for recreation.

West Mill, a water mill, existed at the time of the Domesday Survey. It was leased to the abbot and convent of St Albans by Ralph Bukberd for a term of years ending in 1539. In 1533, they leased it from the end of this term for twenty-six years to Richard Wilson of Watford. He was to keep in repair the mill and also two millstones, 10 inches (25 centimetres) thick, and 4 ft 8 in (142 cm) in breadth.[3] The mill was leased in 1544 to William Hutchinson, yeoman of the spicery, and Janet his wife for their lives.[4] It afterwards came to John Wilson, and was granted in 1576–77 to Richard Master.[4] There was also a water-mill called Batchworth Mill, and a fishery called Blacketts Mill in Rickmansworth.[4] Batchworth Mill was later used as a cotton mill, but was bought in 1820 by Messrs. John Dickinson & Co., and converted into paper mills, now the site of Affinity Water.[4] Scotsbridge Mill was also productive but now is home to a restaurant with the unusual feature of a salmon run. During the sixteenth and seventeenth centuries many of the principal inhabitants were described as 'clothiers,' from which it may be inferred that the manufacture of cloth was at one time carried on in the parish, but this industry has long since ceased. There were also silk and flock mills here, described in 1808 as recently built.

A long-running dispute over water levels in the Batchford area, following construction of the Grand Junction Canal, was resolved in 1825, when an 8.2-foot (2.5 m) obelisk was erected in a pond, to act as a water gauge. It records the agreement made between the canal company, John Dickinson the miller at Batchworth Mill, and R. Williams of Moor Park the landowner.[5]

In July 1860 Lord Ebury obtained powers to construct a 4.5-mile single-track railway line between Watford and Rickmansworth, which opened in October 1862. Rickmansworth (Church Street) station was opposite the church to the south of the town with interchange sidings with the nearby Grand Union Canal.[6] The line had stations at Watford Junction and Watford High Street and a depot in Watford. A further Parliamentary authorisation was obtained a year later to construct an extension from Rickmansworth to connect with the Great Western Railway's Uxbridge branch, but this was never realised.[7]

Despite hopes the railway would bring economic development and serve the factories and warehouses that had developed along the Grand Union Canal, it was Watford that grew at a faster pace and drew business from Rickmansworth. The railway was dogged with financial problems and a further Act of Parliament in 1863 authorised the issue of further shares to the value of £30,000 (£40,000 worth had already been issued).[8] The service consisted of five trains each way. The line was worked from the outset by the London and North Western Railway (LNWR), which paid the WRR 50% of the gross earnings.[9]

The railway was never financially successful and the official receiver was called in only four years after opening.[10] The company attempted to remedy its financial problems by opening several freight branches, the most notable being to the Croxley printers and to the Grand Union Canal at Croxley Green. The company was absorbed by the burgeoning LNWR whose station it shared at Watford Junction in 1881.

Rickmansworth grew dramatically during the Victorian era and in the 1920s and 1930s as part of Metro-land, due to the extension of Metropolitan Railway, and became a commuter town.

Junctions 17 and 18 of the M25 motorway are within Rickmansworth's boundaries giving access to Heathrow Airport, and the national motorway network.

The former police station on Rectory Road was purchased by Lidl in 2013.[12][13] The residents association, the RDRA oppose the proposal for a new store.[14]

Valley Road, Rickmansworth has a frost hollow. This is caused by the local geography, notably the railway embankment which prevents the natural drainage of cold air from a specific part of the valley. Rickmansworth recorded the largest daily temperature range in England when, on 29 August 1936, the temperature climbed from 1.1 °C at dawn to 24.9 °C within 9 hours due to this unique geographic feature.[15]

Watersmeet is a 515-seat theatre complex owned by the Three Rivers District Council in the town centre. Its auditorium can be transformed from a raked theatre to a flat floor for performances in the round, dancing, cabaret, weddings, indoor markets and craft fairs. The Rickmansworth Players (affiliated to NODA) is a well-established amateur dramatics society that performs musicals and plays on a regular basis. Rickmansworth Historical Society meets monthly from September to June in the Cloisters Hall.

Rickmansworth is often shortened to "Ricky", as used in the town's annual "Ricky Week" celebrations which occur in May. The town's canal history is remembered annually at the end of Ricky Week with the Rickmansworth Festival, organised by Rickmansworth Waterways Trust. The annual Ricky Road Run takes place with more than 500 runners.

Until 2010, an annual "Victorian Evening" was held in the town centre in November, but in 2011 it changed to a "Starlight Evening" inspired by the reference to Rickmansworth in the first page of The Hitchhiker's Guide to the Galaxy by Douglas Adams: "And then, one Thursday, nearly two thousand years after one man had been nailed to a tree for saying how great it would be to be nice to people for a change, a girl sitting on her own in a small café in Rickmansworth suddenly realized what it was that had been going wrong all this time, and she finally knew how the world could be made a good and happy place. This time it was right, it would work, and no one would have to get nailed to anything." 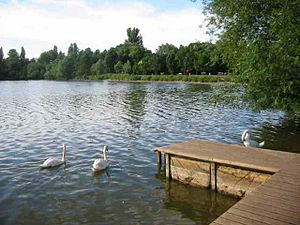 The Aquadrome covers 41 hectares (100 acres) and includes the Aquadrome Local Nature Reserve, Batchworth and Bury Lakes, open grassland, areas of woodland, car parking and a children's play area. Its boundaries are the River Colne to the north, the Grand Union Canal to the east and south and Stocker's Lake to the west. In July 2009, it received a Green Flag Award for parks and open spaces which meet high standards. A café opened earlier the same year.

The lakes are old gravel quarries filled with water and stocked with fish but only Batchworth Lake is available for fishing. Some gravel from the site was used to build Wembley Stadium in 1923. Batchworth Lake is popular for water skiing events and hosts the Rickmansworth Water Ski Club. Bury Lake is home to BLYM, a sailing club and RYA-recognised teaching establishment.

Stocker's Lake to the west of the Aquadrome is a nature reserve. 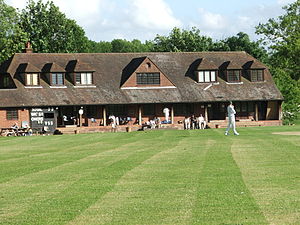