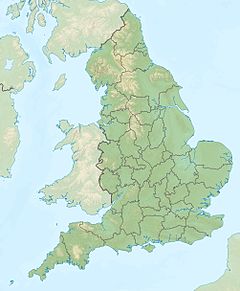 The Women's British Open is a major championship in women's professional golf. Prior to 2013, it was the only major recognized by both the LPGA Tour and the Ladies European Tour. The reigning champion is Inbee Park, who won by three shots at Trump Turnberry in 2015 to earn her seventh major title.

Usually played in late July, the 2012 edition was scheduled for mid-September, due to the 2012 Summer Olympics in London. The 2013 event was played in early August and the 2014 event in mid-July, the week prior to the Open Championship.

Since 2007, it has been called the Ricoh Women's British Open, for sponsorship reasons. The previous twenty editions (1987–2006) were sponsored by Weetabix, a breakfast cereal.[1] 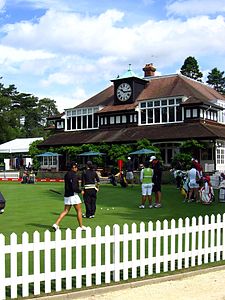 The practice green at Sunningdale Golf Club in 2008.

The Women's British Open was established by the Ladies' Golf Union in 1976 and was intended to serve as the women's equivalent of The Open Championship (often called the "British Open" outside the United Kingdom). At first, it was difficult for the organisers to get the most prestigious courses to agree to host the event, with the exception of Royal Birkdale, which hosted it twice during its early days — in 1982 and 1986. After nearly folding in 1983, the tournament was held at the best of the "second-tier" courses, including Woburn Golf and Country Club for ten straight years, 1987 through 1996, as well as in 1984 and 1999.

As its prestige continued to increase, more of the links courses that are in the rotation for The Open Championship, such as Turnberry (2002) and Royal Lytham & St Annes (1998, 2003, 2006) hosted the tournament, in addition to Royal Birkdale (2000, 2005, 2010). In 2007, the tournament took place at the Old Course at St Andrews for the first time. However unlike its male counterpart, the tournament has not adopted a links-only policy. This greatly increases the number of potential venues, especially the number close to the major population centres of England. Two additional Open Championship venues have been added as first-time hosts for the women's event: Carnoustie (2011) and Royal Liverpool (2012). The tournament has yet to be played at three Open Championship courses: Muirfield and Royal Troon in Scotland, and Royal St. George's in southeastern England.

Through 1993, the tournament was an official stop only on the Ladies European Tour, with the exception of the 1984 edition, which was co-sanctioned by the LPGA Tour. Starting in 1994, it became a permanent LPGA Tour event, which increased both the quality of the field and the event's prestige. It has been an official LPGA major since 2001, when it replaced the du Maurier Classic in Canada. In 2005, the starting field size was increased to 150, but only the low 65 (plus ties) survive the cut after the second round. In both 2007 and 2008 the prize fund was £1.05 million. Starting in 2009, the prize fund changed from being fixed in pounds to U.S. dollars, and is now $3.0 million.

Tied for most victories in the Women's British Open with three each are Karrie Webb of Australia and Sherri Steinhauer of the United States. Both won the tournament twice before it became an LPGA major and once after. Yani Tseng of Taiwan and Jiyai Shin of South Korea are the multiple winners as a major championship. The other multiple winner is Debbie Massey of the U.S., with consecutive wins (1980 & 1981) well before it was an LPGA co-sanctioned event.

There were fourteen "exemption" categories as of 2011. Among the more significant are:

"Final Qualifying" is the traditional way for non-exempt players to win a place at the Women's British Open, although it has become much less meaningful since the tournament became an official LPGA event in 1994. In 2011, an 18-hole pre-qualifying competition was held two weeks before the Open, followed by an 18-hole final qualifying competition the Monday before the Open.

In addition, to permit overseas qualifying, five spots have been awarded to the top five entrants not otherwise qualified who won the highest places at the LPGA's Jamie Farr Owens Corning Classic in the Toledo suburb of Sylvania, Ohio. However, this qualifying method is subject to change in 2011, as that tournament will go on a one-year hiatus. Three spots are also awarded to the three LET members who finish highest in the Finnair Masters and not otherwise qualified.

The Women's World Golf Rankings have only recently[when?] begun to play a significant role in qualifying. See full list of exempt categories and qualifying rules for the 2011 tournament.

Winners before the tournament became an LPGA tournament (1976–93):
(The 1984 tournament was co-sanctioned by the LET and LPGA Tour)

This table lists the total number of titles won by golfers of each nationality as an LPGA major (2001–present).